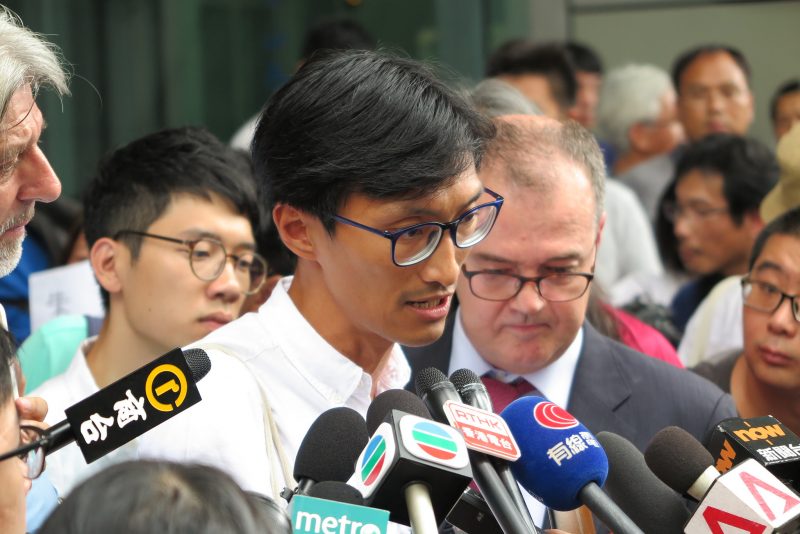 Eddie Chu talked to the press before he reported the death threat to the police. Photo from inmediahk.net.

Editor's disclosure: The author of this article is a personal friend of Eddie Chu Hoi Dick.

Threats of political violence in Hong Kong are rising rapidly in the wake of September 4 legislative elections. Newly elected lawmaker Eddie Chu Hoi Dick reported to the police on September 8 that he received “credible death threats” against him and his family after the election.

Though Chu received more votes than any other candidate in the September 4 legislative election, public support has not safeguarded him from political threats.

As an activist and investigative journalist, Chu has worked in recent years to expose collusion between the Hong Kong government, developers, rural indigenous leaders and triads (Chinese organized crime groups) regarding land development in the New Territories, a region of Hong Kong. In May this year, a village chief in Yuen Long warned Chu that if he continued to advocate for the construction of 17,000 public housing units in Wang Chau district, he would be attacked after election day on September 4.

Indigenous inhabitants of New Territories is a legal term invented by the colonial British government in the 1970s. It refers to the people descended through the male line from a person who had already settled in Hong Kong since 1898. This group of people enjoy a special right to build a small house in the New Territories if they can find suitable land. The status of indigenous inhabitants has to be approved by a group of village leaders who are in control of indigenous villages’ genealogies.

This group of rural leaders have become a powerful force in the New Territories, and extended their power to the government as this power is endorsed by Beijing through the system of functional constituency in the Legislative Council and the Chief Executive election committee.

Chu nevertheless questioned the rural leaders’ representatives during the election debate. On September 4, Chu was followed by two vehicles and saw a man taking photos of him and his election team members. Local media later exposed that one of the vehicles belongs to a man with a long criminal record.

Apart from Chu, another newly elected lawmaker from Western New Territories, Andrew Wan Siu-kin, also received a violent threat. The Democratic Party member found that someone had poured flammable liquid all over his election vehicle on September 2. The next day, he received a letter containing an incendiary device.

Since September 4, Chu and his family have not returned to their home home, fearing for their safety. A credible source revealed that the triad society had offered a price for Chu's killing.

Before he filed a report with police, Chu explained his situation in a press conference (statement via Eddie Chu’s Facebook page):

From 4th September, I have always realised these threats. My family and I stopped sleeping at home. We could not even returned to our home. We still believe that Hong Kong is a place with freedom of speech, where we can express ourselves freely. But at this moment, a LegCo member-to-be of the NTW with 84,121 votes is unable to return to his home due to death threats brought by his political views. We can say that there is no more rule of law. […]

Today we hope that police could investigate the series of happenings seriously and meticulously. Thus, I am unable to expose names and times to you all. But what I can say is that these threats are proximal and nearby, and the time is drawing near too.

The Hong Kong police are now providing Chu and his family with round-the-clock protection.

Democratic Party spokespeople say they believe Chu was targeted because he interfered with the illegal transfer of indigenous inhabitants’ rights in the development of small house units.

According to local “small house policy”, indigenous villagers in the New Territories have the right to build a house of their own. This right is non-transferable. However, secret deals are often made between rural elites and developers, and triad leaders also have stepped in to force indigenous villagers to transfer their land rights.

The Hong Kong government has turned a blind eye to the illegal transfer of these rights because both the triad and rural elites in the New Territories are generally loyal to Beijing.

This is not a brand new conflict. In 2013, members of triads mobilised to demonstrate support and safeguard Hong Kong’s top leader Leung Chun Ying’s town hall meeting from pro-democracy protesters.

A number of civic organisations have issued statements condemning the persecution of Chu and others like him and urging the police to put an end to political violence that threatens the rule of law and freedom of speech.

Chu vowed that he would not submit to political violence after he reported the case to the police:

I will not submit to this kind of political violence – I will continue to fulfill my election promises, to monitor the government and make Hong Kong better.

I should be an example in protecting Hong Kong people’s freedom of speech, our freedom to express political views. We should not back down in the face of any violent threats – this is my promise to Hong Kong people.