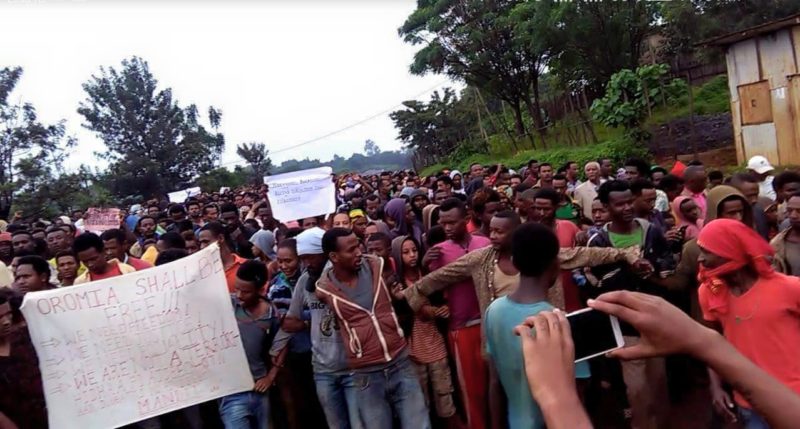 As hundreds of protesters took to the streets over the weekend in Oromia and Amhara, two of Ethiopia’s largest administrative regions, security forces violently disbanded demonstrators with live bullets. According to news sites and social media reports, about 100 protesters were killed.

The protests in Oromia and Amhara started at different times and for different reasons, but they both stem from identity politics. In both regions, demonstrators are challenging the dominance of elites from one group — the Tigray — in Ethiopian politics. The distribution of wealth and power among Ethiopia's 100 million citizens falls suspiciously along ethnic lines. The Tigray make up 6% of the population but dominate the ranks of the military and government. At 34%, the Oromos are the largest ethnic group in Ethiopia, but they have only a nominal federal representation in their country. The Amhara represent 27% of the country's population.

Details of the exact number of fatalities were hard to come by before Monday because the government blocked internet services and telephone services in Oromia and parts of the Amhara region. Funerals of the dead took place on Monday and Tuesday in Bahir Dar and numerous towns across Oromia.

A weekend of killing in Amhara and Oromia

The Amhara regional state capital, Bahir Dar, saw the heaviest causalities in decades on Saturday as the residents took to the streets in protest, defying authorities who killed at least 20 protesters in a nearby historical city of Gonder two weeks before. According to Amnesty International, at least 30 people were killed in one day in Bahir Dar.

Similarly, in Oromia at least 50 people were killed and hundreds were arrested. In the capital, Addis Ababa, hundreds of protesters tried to gather at Meskel Square, but were quickly and violently dispersed by security forces. On Tuesday afternoon a 1:40 second video posted on EthioTube shows security forces brutally beating demonstrators. [Click on the screenshot below to watch.] 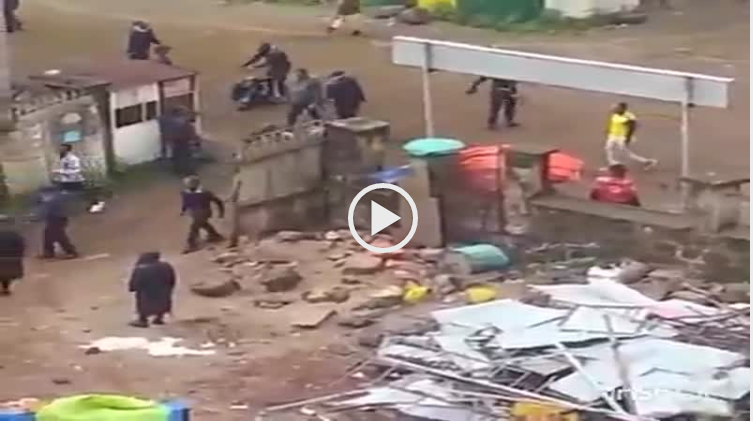 The protests in Amhara began on July 12, 2016 when security forces attempted to arrest a leader of the Wolqait Identity and Self-Determination Committee, Colonel Demeka Zewdu, on alleged terrorism charges. The protestors in Amhara and their leaders are demanding the repositioning of the provinces of Welkait-Tegede community into the Amhara region from adjacent Tigray Regional State.

News reports and social media reports show that grievances among Welkait-Tegede community members have been building for some time over what activists say is the annexation of their land and forceful assimilation of their identity into Tigray region. Remarkably, disproportionate political, economic and military power is vested in the elites hailing from Tigray region.

Pro-government commentators, however, play down the power of the Tigrayan elites instead blame opposition groups for blowing the question of Welkait-Tegede community assimilation out of proportion.

The demonstrations in Oromia are the continuation of protests that have become a daily occurrence since November 2015.

The government rejected the accusation, claiming that the expansion was intended only to facilitate the development of infrastructure such as transportation, utilities, and recreation centers.

Although the government has scrapped the plan to expand Addis Ababa, the move has fallen far short of the demands of the protesters, which include greater questions of self-rule, freedom and identity. For example, the students are demanding that Oromo become a federal language. Oromo, the language of the Oromo people, is the most widely spoken language in Ethiopia and the fourth largest African language. However, it is not the working language of the federal government.

Demands of self-rule in other regions

The arrest of numerous prominent opposition leaders such as Bekele Gerba and Yonatan Tesfaye, the suppression of journalists and bloggers and the brutal crackdown on protesters by security forces, in which at least 500 people have died according to Human Rights Watch have served only to ignite fresh protests in Oromia.

The Ethiopian government spokesperson Getachew Reda frequently says there is no political solution as the government won the latest parliamentary election in May 2015 by 100%.

Observers say that this is the most serious challenge the Ethiopian government has faced since they came to power in 1991. The closest was in 2005 when Ethiopia had its only truly contested election.

But lately questions of self-rule and identity have become one of the sources of political violence. In April there were instances of violent demonstrations demanding self-rule in Southern Regional State, particularly in Konso area. There were also similar conflicts in the South Western State of Gambela in January 2016.

Twitter user Awol echoed similar sentiments saying this is the most significant political mass action since the death of the late Prime Minister Meles Zenawi:

Following the 2005 election the government gunned down at least three hundred demonstrators after the prime minister at the time, the late Meles Zenawi, declared a state of emergency when supporters of the opposition contested the results of the election.

Showing the level of defiance exhibited by the protestors, Ethiopian Press shared the photo below:

#OromoProtests: Another power scene of defiance. An Elder fighting back security forces in oromia #Ethiopia pic.twitter.com/zVdEZMtPWJ

On Facebook, Balcha Mitiku advised protestors not to turn violent:

Please continue the civility you have shown thus far for not putting you hands on civilian properties or civilians.

With this momentum removing the regime and working towards the new and fair Ethiopia is very near. I urge activists to focus on constructively helping the ongoing struggle aiming at creating free and fair Ethiopia that we are going to have sooner.

Sanyiikoo Oromoo pointed out the peaceful nature of the protestors:

Oromo people are peace loving people. We are not aggressors. The people marched with religions books and green tree leaves to indicate that their rally is not designed for confrontation. Yet they were savagely attacked.