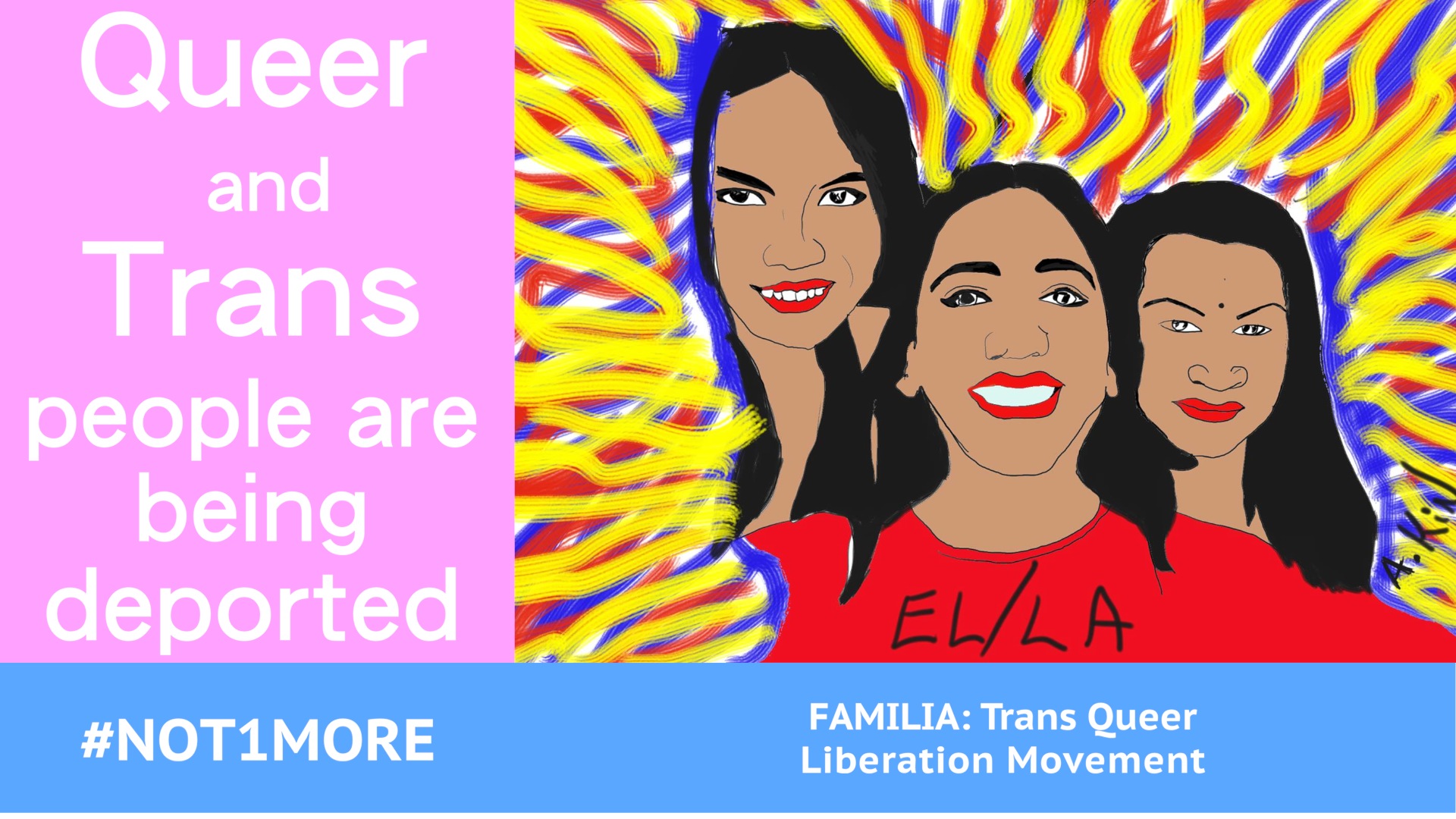 Barbara Lopez Lezama, Agnes Torres Sulca, Hilary Molina Mendiola, Virgen Castro Carrillo, and Fernanda Valle. These are the names of five transgender women murdered in the last seven years in Mexico, whose stories appear in the Report on Human Rights Conditions of Transgender Women in Mexico, released this May by Cornell University and the Transgender Law Center. The new study documents human rights violations against Mexico's transgender women, many of whom have had to seek asylum in the United States.

Researchers found that transgender women in Mexico face brutal violence from state officials, including the police and military, as well as persecution by drug cartels. Societal factors like family rejection and economic marginalization also lead to violence against transgender women in Mexico. The report helps illuminate exactly how “invisibled” transgender women's human rights issues are in Latin America. Mexico has the second-highest index of crimes motivated by transphobia in Latin America, trailing only Brazil. Transphobic murders have also multiplied by ten since in the past six years.

The new study relies on both academic and media research, expert witness testimony, and telephone interviews with advocates at non-governmental organizations in Mexico and the US. The research is also meant to inform US immigration judges and asylum officers about the issues transgender applicants face.

Asylum Is Yet Another Challenge

Some of Mexico’s transgender women have migrated to the United States to apply for asylum (legal protection based on a well-founded fear of persecution either from state or private actors). While the US has its own long and terrible history of transphobia (transgender people report far higher rates of violence than non-transgender lesbians and gay men), rising transphobic hate crimes and stigma are factors driving transgender women to flee Mexico.

The report also highlights how the US immigration system has made accessing asylum particularly difficult. Immigration officials have refused to recognize transphobia and violence in migrants’ communities of origin during asylum proceedings. This, coupled with the transphobia and racism embedded in the immigration system itself, has contributed to the erasure of past experiences of violence and the denial of asylum for many transgender women. In 2012, less than 2 percent of Mexican applicants were granted asylum. There are currently no statistics recorded showing how many asylum-seekers were transgender people, compounded by the fact that many fear persecution based on their gender identity.

According to the report, immigration judges in the US have failed to recognize the differences between gender and sexual orientation, often conflating transgender women with gay men. The report stressed the importance of adjudicators’ awareness that sexual orientation and gender identity are distinct components of identity. Asylum decisions often refer to transgender women as gay men with female sexual identities. According to trans rights activists, this is an inaccurate and disrespectful description of gender identity.

This leads to another issue: the excessive weight given to minor advancements for gay communities in Mexico. Previous asylum decisions have rested on the premise that the legalization of same-sex marriage has benefited transgender women. However, the report states that not only have transgender women continued to face pervasive discrimination, hatred, violence, police abuse, sexual violence, and murder since the passage of same-sax marriage in 2010, but that it has worsened.

One of the report’s key findings is that the expansion of LGBT rights in Mexico, particularly same-sex marriage, has led to backlash against the transgender community. The legal recognition of same-sex couples has increased societal awareness about the LGBT community and produced significant backlash.

In 2015, there was an important asylum ruling in favor of transgender migrants. The United States Court of Appeals for the Ninth Circuit—with appellate jurisdiction over the district courts in Alaska, Arizona, and the central district of California—recognized the mistake of confusing gender identity with sexual orientation in the case of a Mexican transgender woman, Erin Avendano-Hernandez. The Board of Immigration Appeals (BIA) had previously ruled that the implementation of the same-sex marriage legislation in Mexico would make torture unlikely. The Ninth Circuit ruled that the BIA insufficiently considered transgender issues in their decision.

The Ninth Circuit granted Avendano-Hernandez asylum, and reasoned that transgender persons in Mexico are particularly vulnerable to harassment and persecution due to their public nonconformance with gender roles, and that the Mexican police specifically target the transgender community with sexual and money extortion. The court also stated that there is an epidemic of unsolved violent crimes against transgender persons in Mexico, that Mexico has one of the highest documented numbers of murders of transgender people in the world, and that Avendano-Hernandez, who takes female hormones and dresses as a woman, is a target for harassment and abuse.

This decision remains the exception when it comes to protecting transgender migrants’ rights, and activists continue to “visibilize” transgender issues, particularly in reference to the US’s immigration system. Flor Bermudez, the director of Transgender Law Center’s Detention Project, says:

Too often, transgender women who come to the U.S. desperately seeking safety from persecution instead find more violence and abuse in detention centers—only to ultimately be deported by immigration judges who do not understand the life-threatening dangers they face in Mexico. We need immigration judges to make asylum decisions based on the realities transgender women face in Mexico, and this report can be an important tool to educate them.

In grassroots organizing, violence against the transgender community has pushed them to defend themselves fiercely and push for rights on both sides of the US-Mexico border. Bamby Salcedo is a nationally recognized Latina transgender activist who “has brought voice and visibility to not only the transcommunity, but also to the multiple overlapping communities and issues that her life has touched, including migration, HIV, youth, LGBT, incarceration and Latin@ communities,” according to her website.

In 2007, Bamby was detained in the San Pedro Detention Center in Southern California, an immigration center that has since lost accreditation after failing to comply with mandatory standards. As an HIV positive transperson who identifies as a woman, Bamby was forced into the men’s facility and denied HIV antiretroviral drug treatment for two weeks.

In the following video by Fusion, Bamby explains her experience with abuse and harassment while in detention. According to police and medical reports obtained by Fusion, one man detained in the facility punched and fractured her nose after forcing himself on her in a bathroom stall.

Bamby grew up in Guadalajara, Mexico, where she fell into a cycle of drugs, crime, and juvenile institutions. After migrating to the US, she faced imprisonment and constant street violence. She eventually agreed to be treated for drug addiction, and since then she's founded three transrights programs and organizations including Angels of Change, TransLatin@ Coalition, and TransLivesMatter National Day of Action.

Currently, Bamby continues to be an advocate for transgender visibility. Under Bamby’s leadership, the Los Angeles-based TransLatin@ Coalition, an organization that advocates for the rights of transgender Latinas in the US, has published reports like TransVisible: Transgender Latina Immigrants in US Society. When speaking about transgender women migrant rights, Bamby says,

There is still a lot of denial from society about the existence of our community. We need to raise awareness and bring consciousness about…who we are, what are the things that need to be addressed. But we cannot do it alone; we need everyone to be on the same page, politicians, churches, schools, businesses, just our society as a whole needs to learn and understand that we are here to stay.