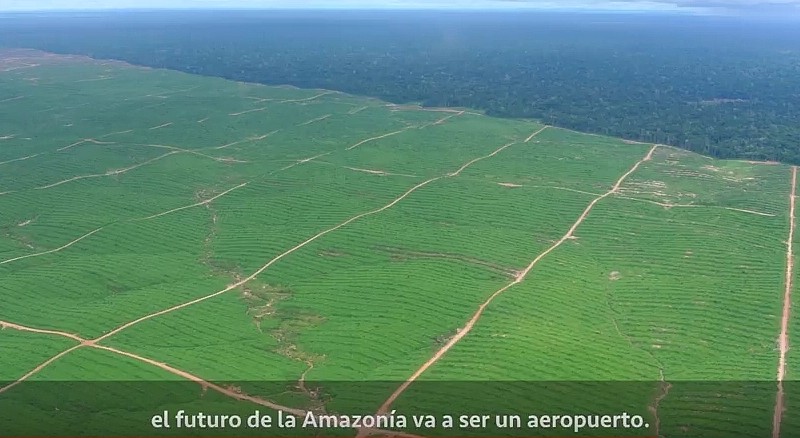 Screenshot of the video UCHUNYA – Where will we live? Subtitle reading: ‘In future the Amazon will be [empty as] an airfield.’

This post is a version of an article originally published on Juan Arellano's Globalizado blog.

Santa Clara de Uchunya is a small community in the Peruvian Amazon, located on the banks of the Aguaytía river in the Ucayali region. Its members, who are of Shipibo origin, are taking legal action against the Plantaciones de Pucallpa (Plantations of Pucallpa) company's appropriation and deforestation of about 5,000 hectares of land that the community considers part of its ancestral territory.

An analysis of satellite images taken in August 2014 revealed about 12,200 hectares of primary forest in two areas of the Department of Ucayali near the Aguaytía river had been razed. According to the MAAP (Monitoring of the Andean Amazon Project), the deforestation is caused by the expansion of two large-scale plantations of oil palms. Subsequently, a report by the environmental website Mongabay linked these plantations with Czech businessman Dennis Melka, through the Grupo Palmas del Perú (Palms Group of Peru), Plantaciones de Ucayali (Plantations of Ucayali), and Plantaciones de Pucallpa (Plantations of Pucallpa) companies.

Melka is best known as the CEO of United Cacao, a company based in the Cayman Islands accused of cutting down more than 2,000 hectares of virgin forest in the Loreto region of the Amazon in northeastern Peru. He is also the founder, chairman, president and chief executive of United Oils, headquartered in the Cayman Islands, and owns a palm oil refinery in Singapore.

This year, investigative journalism initiative Convoca published a special report on the activities of Melka in Peru, both in Loreto and in Ucayali. They discovered that the manager of the regional directorate of agriculture in Ucayali and the former president of the regional government of Ucayali are being investigated by the first prosecutor specializing in environmental matters of Ucayali over alleged environmental crimes, offenses against public resources and accountability of a public official for the sale of land to a Melka company.

Melka companies also began to acquire land from the communities in adjacent areas. Once in their possession, they began to cut down the native forest with heavy machinery. The report by Convoca gathered testimonies from those affected, who denounced the Plantations of Ucayali officials for usurping land. Ramiro Tapullima, of the Bajo Rayal area, testified before the prosecutor:

They destroyed all my rice and cassava farm of about two hectares. I could not stop them because they were armed personnel, security guards with guns threatening us.

They told me to leave my farm because they were going to work on it. The company threatened me with vulgar words that anything could happen to me, this is why I had to leave.

However, Conveagro-Ucayali officials point out that the areas supposedly deforested have always been dedicated to agriculture.

Other communities haven't fought like Santa Clara de Uchunya. The residents of the Shambo Porvenir community for their part said that, in response to the lack of support from the regional government to pursue alternative crops to coca, they accepted the offer from Plantations of Pucallpa to work the oil palms.

However, what is happening in the community of Santa Clara de Uchunya is different from the situation in Shambo Porvenir. The disputed sale of 4,759 hectares of land, as reported by Convoca, between the Regional Directorate of Agriculture in Ucayali and Plantations of Pucallpa in December 2012 did not have the authorization of the Regional Council of Ucayali, and did not take into consideration that these lands already had owners, among them being the community of Santa Clara de Uchunya.

Last year, research by the government found that 6,824.39 hectares of forest had been destroyed, leaving only 0.3% of forest cover. All this deforested area is within the area that the community identifies as its ancestral territory. 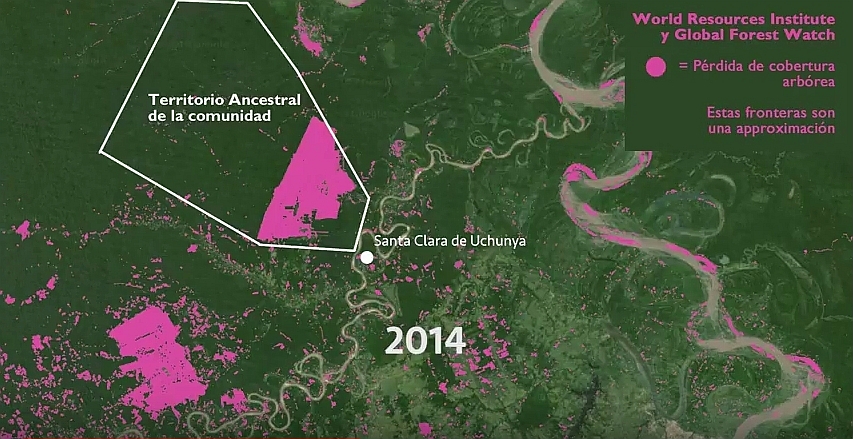 Screenshot from the video UCHUNYA – ¿Y dónde vamos a vivir? (UCHUNYA – And Where Will We Live?). Santa Clara de Uchunya features in the center of the map, while to the left the community's ancestral territory is outlined in white. Pink represents the loss of forest cover.

The blog of the Justicia Viva (‘Live Justice’) organization analyzed the case and concluded that several fundamental rights have been violated, which is why the community has taken the issue to court:

A number of rights recognized in the Constitution and by the International Law of Human Rights have been violated, in terms of communal property, prior consultation and what's suitable and balanced for the environment, among others of the same type. This context allows the native community of Santa Clara de Uchunya to demand in court–and through a constitutional process, namely that of protection–immediate cessation of the acts that violate their fundamental rights and a return to how things were before these incidents occurred: the moment before the greed took the guise of an oil palm and was planted instead of the forest, which today no longer exist.

The community of Santa Clara de Uchunya has not stood idly by; in addition to legal action, it has campaigned to increase public awareness. To help in this regard, it has produced a video that “based on community testimonies, shows the impacts which the community are suffering as a result of this appropriation of their traditional lands and the fight to defend their territorial and cultural rights.”

The efforts of the community to achieve recognition of their territorial rights encompass more than 30 years and they have now reached a critical point. The legal case of Santa Clara de Uchunya is emblematic, because its outcome will have far-reaching consequences for the future of the Peruvian Amazon and its indigenous peoples.

In April 2016, representatives of Santa Clara de Uchunya community, together with other indigenous leaders from Indonesia, Colombia and Liberia, were in several European countries to demand that “the European Union take measures and reinforce its legislation against the violation of human rights and against the appropriation of land related to the global supply of palm oil.” They also went to the London Stock Exchange (LSE) to request that the United Cacao company, owned by Dennis Melka, stop trading on the Alternative Investment Market (AIM), the branch of the LSE on which United Cacao is listed.

It should be noted that although the strategy of Melka and his companies’ lawyers is to remain silent, as they did when Convoca journalists requested interviews, or initiate libel suits against media that discuss the subject, like what happened to the French portal News Confectionary and the German NGO Rettet den Regentad's Salva la Selva (Save the Forest), in this case United Cacao responded. The company said it operates according to the Peruvian laws, since the environmental impact study of the project was initially accepted in 2013 by the competent authorities and that they are awaiting final approval sometime this year.

In the midst of this negative situation, encouraging news came in the form of an injunction by the 9th Constitutional Court of Lima to halt deforestation in Tamshiyacu, Loreto, by the company Cacao Peru North SAC, of the United Cacao. It remains to be seen if the same will happen soon for Santa Clara de Uchunya.