The Arkana Alliance: An Organization that Builds Bridges with the Shipibo Communities of Ucayali in Peru 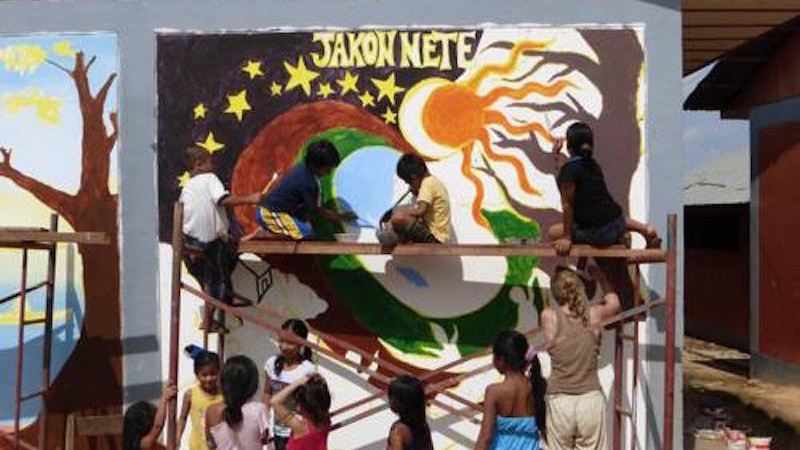 Photo of the work being done with the kids at the intercultural elementary school of the Shipibo urban community in Bena Jema (in central Peru) to paint a mural showing the four worlds of the Shipibo cosmovision. Photography from the Facebook page of the Arkana Alliance, February 2015, used with permission.

Alianza Arkana / The Arkana Alliance (AA), in its own words, “is a grassroots alliance regenerating the Peruvian Amazon by supporting its indigenous people and their traditions. One of its projects, “Chariboan Joi” — which in the Shipibo language means “Voices Soaring Like the Maracaná Macaw” — was among the grantees of the 2014 Rising Voices Amazonia initiative that aimed at “disseminating on the internet stories, traditional knowledge and everyday experiences.”

According to the Arkana Alliance, “The wellbeing of life on Earth depends on the resilience of the Amazon rainforest and its people. Community alliances for regeneration are essential to growing this resilience. The Arkana Alliance creates mutual relationships with communities in the Peruvian Amazon to cultivate sustainable solutions and creatively confront the array of eco-social challenges we face today.”

In practice, the group that makes up the Arkana Alliance is quite diverse. It consists, on the one hand, of foreigners coming mostly from European countries, and on the other, of members of the Shipibo indigenous communities from the region. This gives us a vision of the intercultural work promoted by the AA.

According to Dr. Paul Roberts, one of the founders of the Arkana Alliance, the idea is “to build solid long-term partnerships with indigenous organizations and communities, aiming at strengthening the Shipibo culture.” An example of these partnerships was the “Seeds for the Amazon” program launched by AA a few years ago, an indigenous youth-led community program for the regeneration of the Peruvian Amazon.

However, Dr. Roberts says it is not so easy to carry out this intercultural work:

It takes time to build trust with the Shipibo. Moreover, the Shipibo have seen that many NGOs come and leave after a short time; this is why we believe that we should be here for much longer.

One way to succeed has been to involve the Shipibos themselves in the management of the projects:

I think that something very important is that we have involved more Shipibos to work with the Arkana Alliance, both as part of the staff and as consultants for the organization. We are even involving more organizations and communities with whom we work on research and development of fundraising proposals.

Roberts also mentions another example of their work:

We have started a project that is a basic health service in the urban community of Bena Jema where there are many health problems. This project is led by two women — a Shipibo woman who knows a lot about traditional medicinal plants, and a German woman who is a midwife and also practices homeopathy. It gives me great joy to see how this project is progressing. For me, this is a good example of intercultural work — in this case, related to health.

Solidarity and struggles for the environment

The Arkana Alliance is also involved in the struggles of several other indigenous communities, not only of the Shipibo. Thus, it helps to spread throughout the world the message of indigenous leaders. An example is the following video in which, during an interview about the 40 years of pollution in the Peruvian Amazon, Alfonso Lopez, leader of the Kukama community, asked the international community to support his people's struggle in defending the environment, its life and rivers:

Artisans from Bena Jema. One of the main activities of the women in these indigenous communities is the making of handicrafts, painting, weaving and jewelry with seeds. This type of activity implies that the mother and the female relatives have the task of caring for and supporting the family. Image created by children of the Shipibo community in Bena Jema during a workshop organized by the Arkana Alliance. Photo used with permission.

A good way to learn about the activities of the Arkana Alliance is through its blog, published in Spanish and English. For example, this post about its major achievements in 2015 is very interesting, or another post on the publication of “Learning from the Peruvian Amazon” (which can be downloaded for free) written by Dr. Paul Roberts, Director of Intercultural Education for the Arkana Alliance, and Laura Dev, PhD student at the University of Berkeley, California. 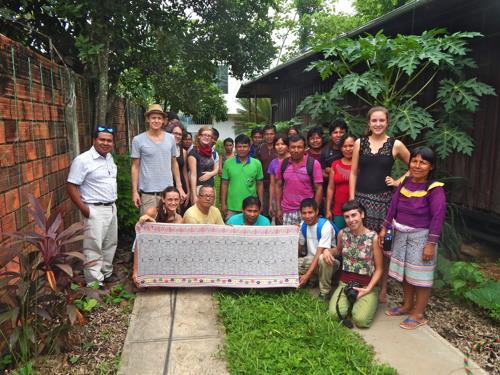