All Holds Barred in Cage ‘Fight’ Between Two Kazakhs 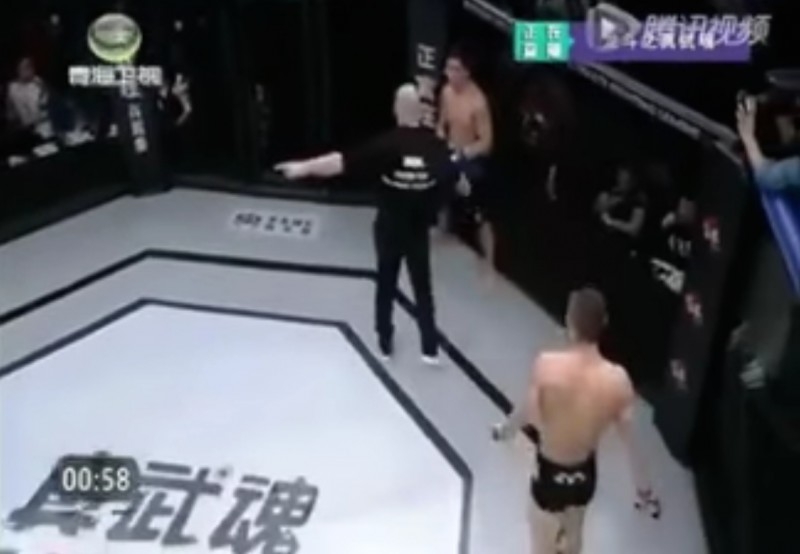 Screenshot of the Mixed Martial Arts fight in Shanghai between Aibek Nurseit and ethnic Kazakh Gabit Turganbek from a video uploaded by QAIMAQ TV.

Kazakh social media networks have been discussing a bizarre Mixed Martial Arts (MMA) cage ‘fight’ between one of their own citizens and an ethnic kinsman from China in Shanghai, which ended in mutual disqualification after both fighters appeared to be simply going through the motions.

The reason for that, as learned by RFE/RL and a host of local Kazakh news websites, was that the two Kazakhs did not want to harm one another.

The display of brotherliness, which saw some light grappling but none of the destructive knee, kick and punch combinations for which the sport is famous, did not impress the judges, who promptly disqualified the pair.

A video from the fight is below:

One of the fighters, Aibek Nurseit, told RFE/RL:

Gabit [Turganbek] and I, we both made it to the finals. I had beaten a French fighter and Gabit beat a Ukrainian guy. We never agreed beforehand that we wouldn't hit each other. [But] when I entered the ring and the fight started, I felt immediately like Gabit was avoiding hitting me. I understood that he didn't want to fight with me, and I couldn't raise my hand against another Kazakh either.

Nurseit said a large sum of money and a championship title were at stake, but he didn't want to win them by beating a fellow Kazakh.

“I met Gabit after the fight at the banquet. We shook hands and that was it,” he said.

Judging by YouTube comments, the gesture was well appreciated by ordinary Kazakhs:

Thanks a lot lads, good work. You did us proud!

Gabit Turganbek is one of 1.5 million ethnic Kazakhs hailing from China's western Xinjiang province. Kazakhs are the most populous Central Asian minority living in the province bar the Uighurs (est. 8.5 million), while Kyrgyz, Uzbeks and Tajiks also live in the region.

Ethnic Kazakhs make up over 65% of the population of ex-Soviet Kazakhstan, with around a fifth of the state's population made up of ethnic Russians.