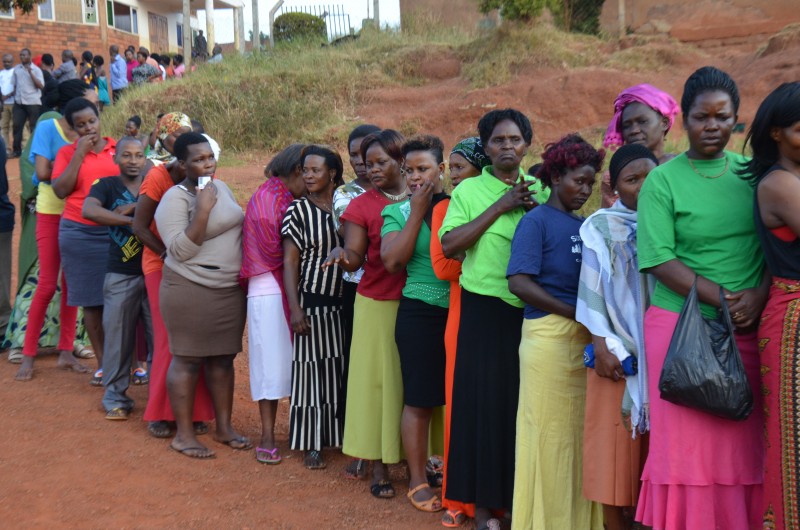 On February 18, Ugandans voted in presidential, parliamentary and local elections tainted by violence, protests, arrests and reports of rigging.

Ugandan and international observers have given a mixed opinion on the integrity of the vote, but one local organization, the Citizens’ Elections Observers Uganda, have discredited the whole exercise.

Provisional results show that the incumbent, Yoweri Museveni, who is seeking to extend his 30-year rule with a fifth term in office, is leading with nearly 62 per cent of the vote.

Kizza Besigye, the main opposition candidate representing the Forum For Democratic Change (FDC), was arrested along with some of his officials when police stormed his party's headquarters, firing teargas and stun grenades. Journalists who were live tweeting from the scene were also arrested. In total, Besigye has been arrested three times this week alone.

There were protests outside the party's headquarters on Friday and some skirmishes were reported in different parts of the country over delay in declaring results.

Presidential elections in 2006 and 2011 were also marred by violence and public protests.

On election day, the Uganda Communications Commission blocked access to Facebook, Twitter, and WhatsApp an hour after voting began, claiming that it was done in the interest of national security. The services are still blocked.

Some bypassed the block using virtual private networks (VPNs), and once Ugandans were able to access social media, many published reports of what they were seeing.

A Twitter user forwarded along a message that was sent to a telecom company's customers about the disruption of service:

Another user, ‘PeacifulTransitionUg’, shared a photo of tyres burning in the capital Kampala:

‘Uganda is a boiling pot!’

Days before the vote, Besigye protesters and police clashed violently in Kampala. One person was shot dead, and police fired canister after canister of tear gas to break up the gatherings.

Users discussed their upset with the situation. Calling attention to the way the police and soldiers treated opposition politicians and their supporters, ‘Cane cutter’ wrote:

it is not #UgandaDecides it's #MuseveniPoliceDecides never before have the police behaved this clownish as if they are the candidates!

However good a leader might be, holding to power for decades does more harm than good for a nation. Uganda is a boiling pot! #UgandaDecides

When the one who holds our freedom has the guns and teargas. Sigh 😩Lord hear us! #UgandaDecides

It is in #Uganda where protestors get beaten up by the #ugandapolice for wanting to know the truth. #UgandaDecides #UgandaElections

Winning an election through hook and crook while clobbering your fellow countrymen should never be a proud moment! #UgandaDecides

While another Ugandan noted that:

Ths govt makes it so freaking hard to be patriotic.I love my country,bt I sadly fail to believe myself as I say I love Uganda #Ugandadecides

‘Who are you resisting?’

Questioning the use of public resources to terrorise civilians, Ashaba Godfrey, a student, said:

Museveni nooooo, we are tied of u There z more of tear gas than medicine in the hospitals God resume us from #ugandadecides

On the same topic, Stuart wondered:

This government has choppers to teargas Besigye offices but no choppers to deliver ballots. #UgandaDecides https://t.co/vLkb4LBF5z

Davido, a biotechnologist, wanted to know why the election was even held in the first place:

Someone just reminded me it's all in the name.NRM.Resistance is what this party still identifies with. Who are you resisting?#UgandaDecides

The final election results are expected to be announced on Saturday February 20.