Messi and Murtaza. Photo shared on the Facebook group of Shoja Designi.

For almost a month now, the image of a five-year-old boy playing soccer near his home in eastern Afghanistan sporting a plastic bag with the football icon Lionel Messi's name and number splashed in marker pen has been trending on social media.

Now the world is waiting to see when Murtaza Ahmadi will get to meet the Barcelona and Argentina No.10.

Murtaza, whose family is unable to provide him with a genuine Lionel Messi football shirt, grabbed the attention of local media and subsequently the international agencies for his apparent devotion to one of the greatest footballers of all time.

Murtaza's makeshift shirt was fashioned for him by Homayoon Ahmadi, his older brother, who posted a photo of him on Facebook.

His father Mohammad Arif Ahmadi told local station Ariana TV: “He loves football and he loves Messi. he asked me many times to buy a Messi shirt but I could not provide it because in the village where we live, there is no such shirt.” 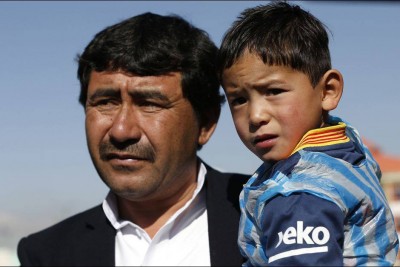 Ahmadi also spoke of his wish to see a football stadium in Jaghori district, Ghazni, where Murtaza lives.

“We do not have any personal desires but what we expect is opportunities for our children to have a better future.”

After foreign internet users first saw the mystery boy, a rumour developed that he was a Kurdish child from Iraq.

That belief was given added currency when Kurdish TV reported that a boy called Homin, located in Dohuk province, Iraq, was the subject of the photo.

But then Twitter user @illMindOfRobin claimed that he had made up that story to draw attention to the town where his parents were from.

@xmcrt_ it wasn't iraq. duhok is where my parents were born so i just made it up. every media says iraq without source referencing to me

Earlier this week, the Afghanistan Football Federation invited Murtaza and his family to Kabul. Keramuddin Karim, the federation's president promised to grant him an opportunity to meet Messi.

“We have already contacted Barcelona club and they will respond within 4-5 days about the time and the place where they want to meet Murtaza,” the federation chief said.

Although Barcelona has not released an official announcement, BBC Persian reported that the Spanish Embassy in Kabul said that they will try to provide the opportunity for Murtaza to meet Messi. His father has said the meeting will take place in Barcelona at the club's famous Nou Camp stadium.

This would be somewhat ironic as European countries line up to slam the doors shut on migrants from war torn countries, including Afghanistan, but Murtaza's family is unlikely to refuse the opportunity of acquainting him with his idol.

In the meantime, football fans around the world have been displaying their envy:

What happens when people find out that a boy wearing a polythene bag football shirt has the chance of meeting Messi.