Saber Hussain's Pedal-Powered Library: A Story of Hope from Afghanistan 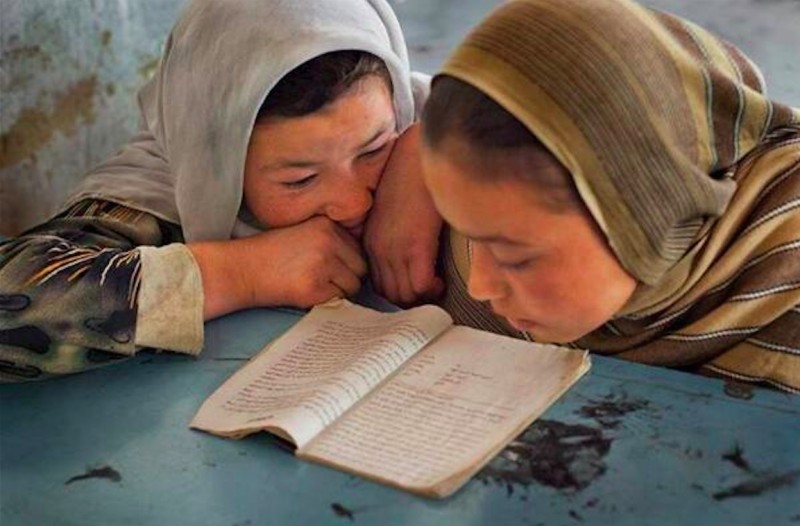 In Afghanistan, education begins at home.

That is the message of Saber Hussaini, a 35-year-old author and storyteller who has been on his bike for more than a month, distributing volumes of children's books in villages where there is a demand for reading materials and a program of learning that local government cannot satisfy.

Don't expect to read Saber's story on CNN, or even mainstream media in Afghanistan, however.

Positive stories about the country of 30 million people do not sell, leaving worthy tales unfairly ignored and a country misrepresented. Yet there are still individuals and organizations who, no matter the violence and war, are committed to working hard for a brighter, more peaceful future.

In late October, Saber Hussaini, a 35-year-old author and storyteller, initiated a mobile library covering five villages a day in central Bamiyan, a mostly Hazara-populated province in the middle of Afghanistan where the smattering of poorly stocked libraries does not include a single children's book.

Saber Hussaini decided to distribute his 200 volumes of children's books to schoolchildren in his free time in order to respond symbolically to the unquenchable thirst to read in cut-off Bamiyan.

Saber’s mobile-library, with a rough capacity of fifteen books, quickly attracted many children. Soon the story books and the books of illustrations he carried on the back of his bicycle substituted plastic pistols and other time-wasting toys.

Saber now plans to expand the number of services he offers and open a children’s foundation in Bamiyan.

#MyAfghanHero is Saber Hussaini, man who runs his own children's mobile library for 5 #Bamiyan villages pic.twitter.com/Vp5V7soZbt

Saber represents a war-weary generation that hungers and strives for education and finds his ideal in the book and the pen.

People of his age are too young to have known a time where violence and conflict were not pervasive, but not too old to believe that Afghanistan's future is something different.

In the morning, I woke up to this news. I smiled. “Bamiyan is a world of miracles.”

Saber Hussaini, of course, is far from the only hero increasing access to education in Afghanistan. Zainab Karimi, a 50-year-old woman that also hails from Bamiyan province has taught 500 women to read and write over the last five years at her own expense.

As an adult, Zainab joined literacy courses that enabled her to pursue her education until 12th grade. She then turned teacher, determined to teach in the villages of her region until illiteracy was eradicated.

Zainab's teen years coincided with incessant war in Afghanistan. Teaching hundreds of women of her age, she keenly proves that war cannot crush the human will to learn.

Bamiyan province has the highest rate of girls education in the country. Of its 135,000 students, nearly half are girls. CBS

Hemmed in by majestic mountains in a country that is already landlocked, Bamiyan is one of the most deprived provinces in Afghanistan. All the universities across the country are woefully underfunded, with only $1,000 available for books at each.

Bamiyan University seems somehow to have suffered doubly. Yet despite its poverty the province is number one in terms of providing access to education for boys and girls.

Of all provinces in #Afghanistan #Bamiyan rocks when it comes to focus on education&gender equality despite poverty. pic.twitter.com/OPBkgE9CjM

Students in Bamiyan are very active, with students at Bamiyan State University speaking out regularly against poor conditions there.

In 2013, they held a demonstration to draw attention to the degraded state of the students’ dormitory. More recently, in early April, they went on strike, protesting the unfair distribution of the higher education budget, which they argued disadvantages Bamiyan.

On both occasions the government ignored them. But they have become used to that. In Afghanistan, the right to an education is not a right you are born with. It is a right you struggle and fight for.