The Crimea will host a referendum this Sunday, March 16, 2014, to determine whether the autonomous republic will remain in Ukraine under expanded autonomy or ask to be absorbed into the Russian Federation. For the past two weeks, Ukraine’s new authorities in Kiev have railed against the vote, arguing that the Crimean parliament has no right to pursue secession without the participation of the national government.

Some Russian Internet users are now concluding from images circulating online that Crimean state officials might be planning to exclude their own electorate from the voting process, as well. 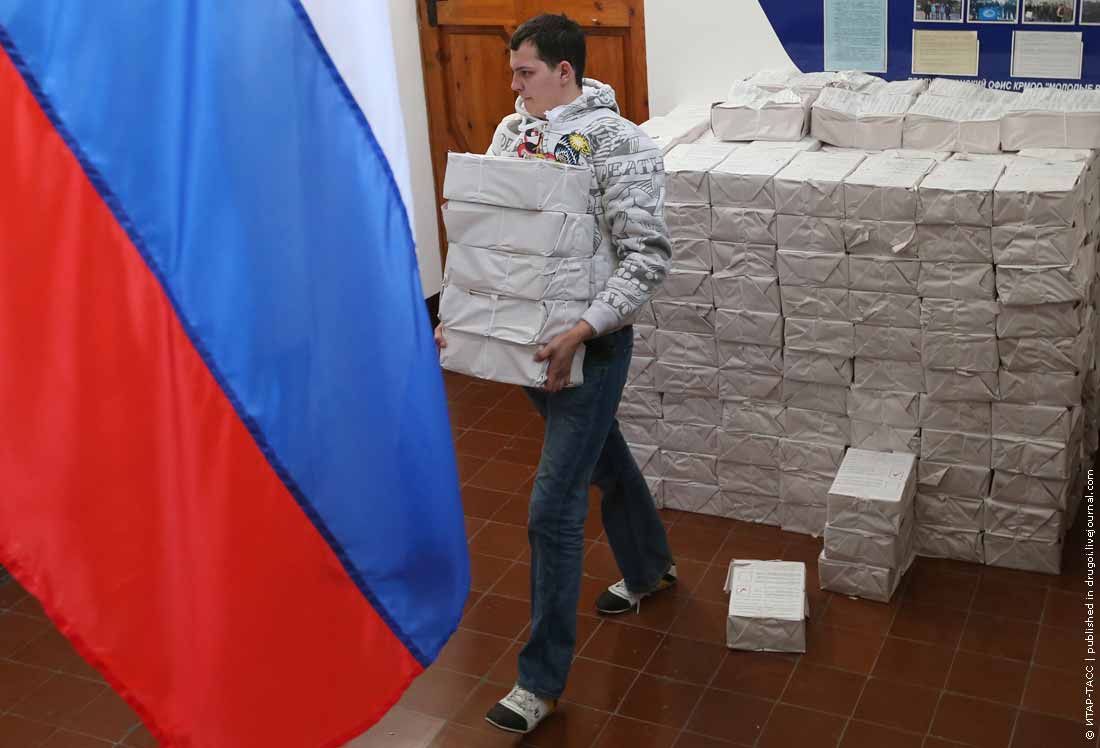 The photograph at the center of the ballot falsification scandal.

On March 12, blogger Rustem Adagamov published photographs from Itar-Tass by Sergei Fadeichev of referendum preparation throughout the Crimea. In one photograph (see above), a young man is moving what appears to be a stack of voting ballots. After Adagamov published the images, observant readers quickly noticed that the cover sheets on the stacks of paper were printed with pro-secession votes already selected.

The website freejournal.biz picked up the chatter on Adagamov’s blog, running a story with the headline, “Ballots in the Crimea Already Filled Out in the Right Place.” The piece also cited a Facebook post by Ukrainian parliament member Oleksandr Briginets, where he reported secondhand information that Russian citizens were being bused into Simferopol to stuff the ballot box in favor of secession. “My mom and many people living in Feodosia saw these buses!!!” Briginets wrote on March 13.

According to Yandex’s blogs search engine, there are 780 separate pingbacks to the freejournal.biz post, meaning that hundreds of Russian bloggers—writing mostly on Vkontakte and Twitter—shared this story, typically expressing their anger about the apparent voter fraud planned for this Sunday.

A close-up of the pro-secession Crimean referendum leaflets.

Upon closer inspection, however, the falsified ballots in the photograph on Adagamov’s blog may in fact be leaflets made by pro-Russia agitators. The same day that Adagamov posted the images, newspaper RBC Daily published its own photograph—a close-up—of the same documents (see above), which it identified as leaflets produced by a local chapter of the Party of Regions.

Admittedly, the leaflets were designed to be nearly identical to the real ballots. There are two important differences, however. Unlike the official ballot announced earlier this week by Crimean election head Mikhail Malyshev, the leaflets were printed on white paper. (The actual ballots are being printed on yellow paper.) The paper size of the leaflets also seems to be larger than the dimensions that Malyshev advertised this Tuesday. Finally, of course, there is the booming red checkmark on the leaflets. If you look carefully at RBC’s picture, you’ll see that the box around the checkmark doesn’t close completely. There is a small space left unfilled, making it impossible even to suggest that the vote was cast after the ballot was printed.

So does this mean that Russia won’t try to steal the referendum on Sunday? It absolutely does not mean that. But this one photograph and the reaction it’s causing online do suggest that Russians won’t be terribly surprised, if the vote is fixed. Many are ready to believe the worst now, even on laughably circumstantial evidence.