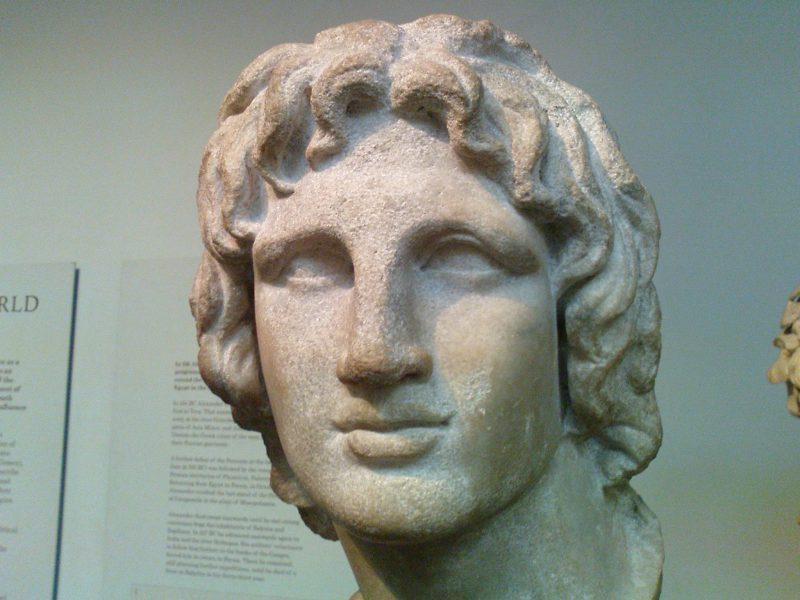 Marble portrait of Alexander the Great said to be from Alexandria, Egypt (2nd or 1st century BC), currently in the British Museum, London, UK. Photo by Filip Stojanovski, CC BY NC.

The only other person who can come close in this regard is the late pop singer-turned national hero Toshe Proeski (1981-2007), but he has been allowed to rest in peace for the last couple of weeks, after the closure of a defamation lawsuit between his girlfriend and his manager.

Alexander III of Macedon (356 BC – 323 BC), on the other hand, has no such luck – national TV Kanal 5 this Sunday descended to a new level of Hades when it literally “raised” his spirit in a so-called news item [MKD] about a “historian” who went to Florida with a camera crew to seek the services of an allegedly famous medium to provide contact with his (sic!) ancestors. In the video, the spiritualist claims that a young man dressed in lion's skin is standing in the room, saying he went to Persia not for conquest but to seek cultural exchange, and would like to know more about the contemporary Macedonian linguistics.

Razvigor blog, run by the author of this article, commented [MKD] on this quasi-news item asking how come the ancestral spirit could communicate in English, a contemporary language which developed thousands of years after his death, but had no information on Macedonian, which developed in a similar manner. In addition, this “communication” did not provide any exclusive information which would have been known by the historical Alexander, such as locations of treasures that can be unearthed by archeologists and used as evidence, or known by his spirit – like the location of the grave containing his earthly remains.

Two days later, a user on the social bookmarking service Kajmak.ot “unearthed” [MKD] an obviously faux news item [SRP] from a Serbian blog about the discovery of Alexander's tomb in the south of the Republic of Macedonia, near the Greek border. The article is written with the structure of a “real” news story, but any resident of Macedonia with minimal knowledge of local geography or social issues would immediately recognize it as a joke, since all the names of official institutions, functions, locations and persons involved are nonexistent. During that day, a number of Macedonian media, such as the news portal Kirilica [MKD], published Macedonian translations of this “news” in its entirety, adding just a small, barely noticeable disclaimer that the content has not been confirmed. Such gossipy items did not contain any fact-checking whatsoever, nor did they include a link to the original source. During the day, the site was frequently unavailable, possibly due to bandwidth overload.

Other bloggers, such as Mojon and Azhder, reacted with lascivious humor, inviting the media to republish their posts about a discovery of a sexy photo of Alexander's seventh grade math teacher taken with his iPhone Ancient [MKD], and finding of the two sculls of King Marko [MKD].

On the other hand, the scientifically-grounded Archeological Diary documented the whole affair, providing an overview of the sensationalist (including A1, the most influential national TV station) and more somber media coverage of this affair. The blog's author Vasilka Dimitrovska, an archeologist, wrote [MKD]:

I suppose that the historians and the archeologists will continue to keep mum about these events [MKD], just like they kept silent about the world's first hamburger, the Copper Book, the Hunza and the Kalash, the Rosetta Stone affair, etc. There's nothing worse than such silence and ignoring, because it implies silent approval of such hypotheses and theories. We as society slowly move closer to the axiom “that the land has always been ours,” aiming to provide an united and monolithic view of a historical walkabout from the Paleolithic to Tito, even though some of the episodes are not quite “safe” and lead to the above mentioned failures of reason.

The view that history is a science based on immaculate myths, lacking elements that would contradict the fragile “officially ours Macedonian evolutionist schema” deserves criticism. We do not need to lie [MKD] – the truth is enough, no matter what it is. In spite of the fact that the same tendency spans from Greece to Sweden – recent research showed that national myths of all European countries are almost identical [MKD]. Dissemination of such trivial information provides a fake image to the world about strengthening of our identity (esp. the ancient Macedonian part), while lacking the scientific approach, published scientific papers and documented archeological findings. I really can't see why we should use a technique of self-identification through denial [MKD] to confirm any type of identity.