Around 13,000 political prisoners remain in jail 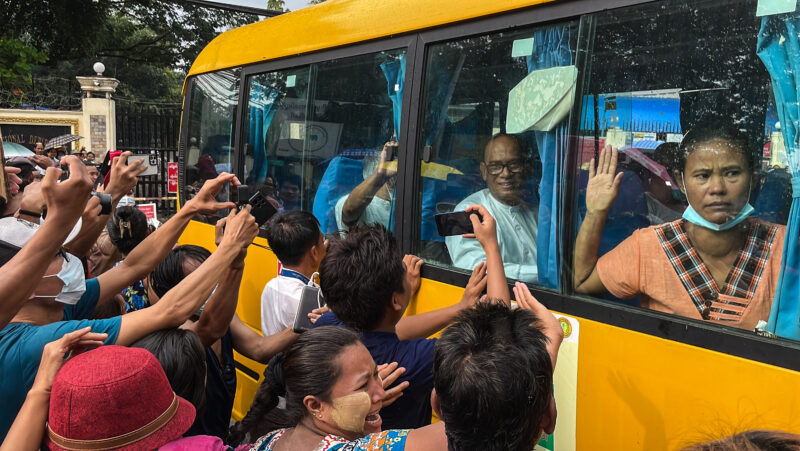 Myanmar released 5,774 prisoners during its National Day on November 17, which commemorates the start of the uprising against British colonial rule in 1920.

As of November 18, the Assistance Association of Political Prisoners-Burma (AAPP) has documented the release of 72 political prisoners. But around 13,000 are still languishing in jails, the majority of whom were arrested for defying the military junta which grabbed power in February 2021.

The release was announced after a sustained global campaign calling for the release of prisoners especially those who were peacefully resisting military rule. It was also done during the same week when global leaders were in neighboring Thailand for the meeting of the Asia-Pacific Economic Cooperation.

Turnell, who served as an adviser of detained Myanmar leader and Nobel laureate Aung San Suu Kyi, was arrested immediately after the coup and charged with breaching Myanmar’s Official Secrets Act. After his return to Sydney, he wrote on Facebook his thoughts about the military rulers of Myanmar:

I am, of course, acutely aware that as I experience the joy of my reunion with my wife Ha and all my family, the 53 million people in Myanmar continue to suffer under a regime that is about as unrepresentative of them as is possible to imagine. It is a tragic and terrible thing that the nicest people I have encountered anywhere are ruled over by such knaves and fools.

In a subsequent post, he wrote about his appreciation for the people of Myanmar:

While appreciated (and characteristic of their kindness and decency) it is not necessary. The people of Myanmar are victims no.1 of the thugs that rule over them. On so many occasions during my 650 days were simple kindnesses extended to me by ‘normal’ Myanmar people (much more vulnerable than me).

I have contempt for Myanmar’s generals, but for the people of Myanmar – nothing but love and respect.

In an interview with The Australian newspaper, he narrated his prison ordeal:

They didn’t stick electrodes to me, but I was thrown into filthy cells. The food they used to deliver to me [came] in a bucket. For 650 days, I ate out of a bucket.

In the monsoon, the roof would leak and we would sit there all night sometimes with water just pouring down through the roof, clutching your clothes and blanket to try to keep them dry.

Kubota was arrested in July while filming a protest in Yangon. He was sentenced to seven years for violating the electronic transactions law and three years for incitement and violating the immigration law.

In an interview with TRT World, a Turkish public broadcast channel, Kubota talked about his arrest, interrogation inside a police station, and the conditions inside the prison cell:

I gave an interview to @TRTWorld and talked about what I saw in Yangon and how I was treated in the police station. I'd like to emphasize the fact the most vulnerable have been victimized by the military, which is still going on. https://t.co/jKTFhQ3gra

Despite the mass release of prisoners, analysts and human rights advocates are urging the international community to continue speaking out for the release of thousands of prisoners who are facing various charges for opposing the junta.

Journalist Aung Zaw, the editor of the banned independent media, The Irrawaddy, warned about the old tricks used by the junta:

…we must also see the amnesty for what it is: a cynical gesture, little more than a worn-out dirty trick from the decades-old playbook used by regimes past and present. We should not be fooled by it.

I have seen this script played out many times over the past 30 years—I have also seen the way it dupes some in the international community into believing that compromise with the junta is possible.

AAPP Secretary U Tate Naing asserted that most of the released political prisoners had already been sentenced under baseless accusations and random charges. He described the mass amnesty as a “charade”:

The whole charade is but an attempt to alleviate domestic and international pressure off the junta, so that it can continue to commit inhumane crimes daily against the people.

Meanwhile, the special envoy of the Association of Southeast Asian Nations welcomed the development in Myanmar as “an important gesture” towards helping create a conducive environment for dialogue.