Kianoush Ramezani: The journey of an exiled political cartoonist

Being an Iranian political cartoonist in exile 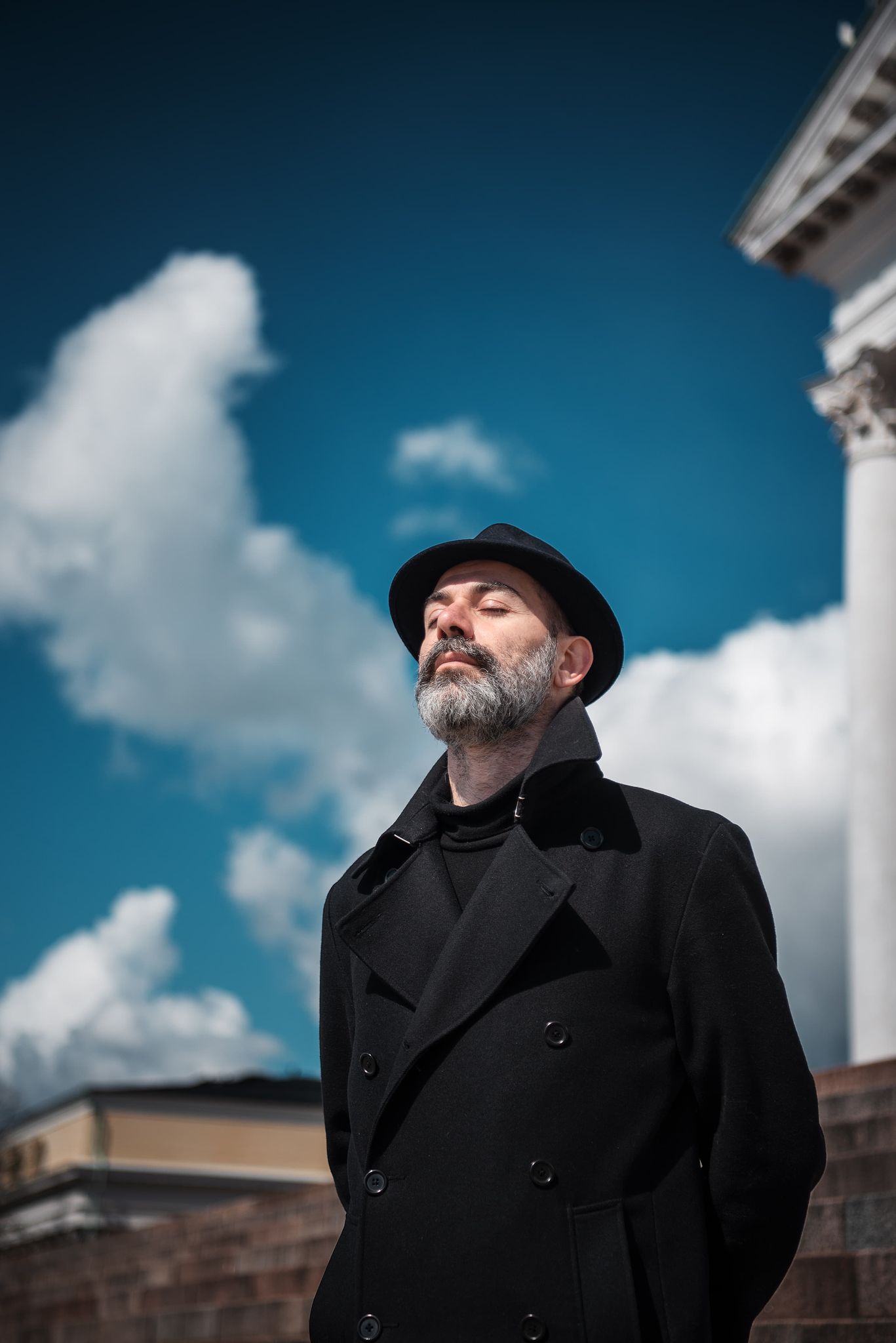 In 1989, 16-year-old Kianoush Ramezani was experiencing unimaginable grief after losing his father unexpectedly in one of Iran's notorious prisons. His anguish was exacerbated by the transforming reality around him, in which the state deprived him of his voice, culture, and way of life in the aftermath of the 1979 Islamic revolution.

He had no idea at the time that his sensitivity, creativity, and thirst for justice would propel him away from his beloved Iran and into the diaspora, where he would go on to become one of Europe's most prominent political cartoonists and a voice that speaks for millions of Iranians who, like him, had been silenced by their government's oppression.

Thirty-five years later, Kianoush is a multi-award-winning political cartoonist and novelist who has lived in France since 2009, where he was granted political asylum in 2010 and is now a refugee under French protection.

His editorial cartoons appeared in La Croix, The Guardian, and Courrier International, among several other European and international media outlets. He has also received several awards since his asylum, including but not limited to the International Editorial Cartoons Prize in 2012, Artistic Courage award, Angoulême International comics Festival in 2018, and Liber Press international award in 2022.

Kianoush reflected on crucial milestones in his journey as an artist living in exile and the events that led to that exile in a conversation with Global Voices over Zoom. 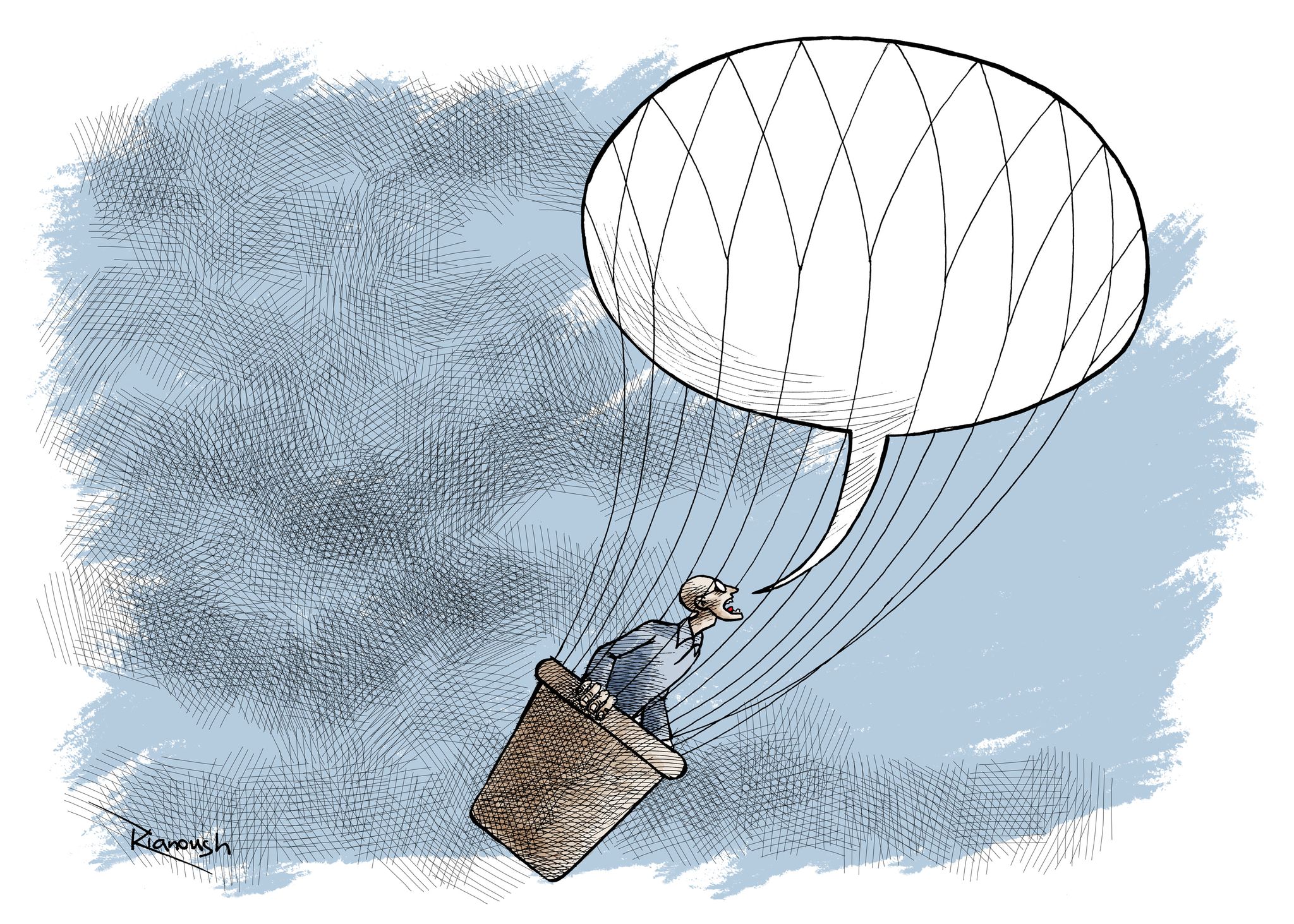 Kianoush spent his boyhood caught between two realities: the safety of his home in Rasht, the capital city of Gilan province, on Iran's Caspian Sea coast, where he was surrounded by his extended family, and the outside world, where the government imposed stringent rules for citizens to follow.

Like millions of other children, I grew up in two parallel and absolutely different worlds. One was the interior world of my family, who strove to maintain some essential aspects of the free life they knew before the so-called Islamic revolution, even though the consequences were super harsh and hard.  On the other hand, there was public life.

I had to protect my family by telling lies, because at school they were trying to tell us who we were by repeating the war's propaganda. They sometimes asked us if we had video cassette players at home, or playing cards, or if we had alcohol.

They abused the situation of the war to really brainwash our generation.

Kianoush, a sensitive child, was well aware of what was going on around him at a young age. It was difficult to ignore his reality, especially that his father could not accept the injustice forced on them as a result of the 1979 Islamic revolution.

His sensitivity turned to rage after his father died abruptly in prison in 1989, when Kiannoush was only 16 years old, around the period of the 1988 mass executions of Iranian political prisoners:

My father was a rebel. He never accepted any kind of submission, and as a result, he suffered the consequences. He went to prison when I was a teenager and died there.  No one knew why. We never understood what happened to him, it remains a mystery for us to this day.

Life in Iran as a political cartoonist 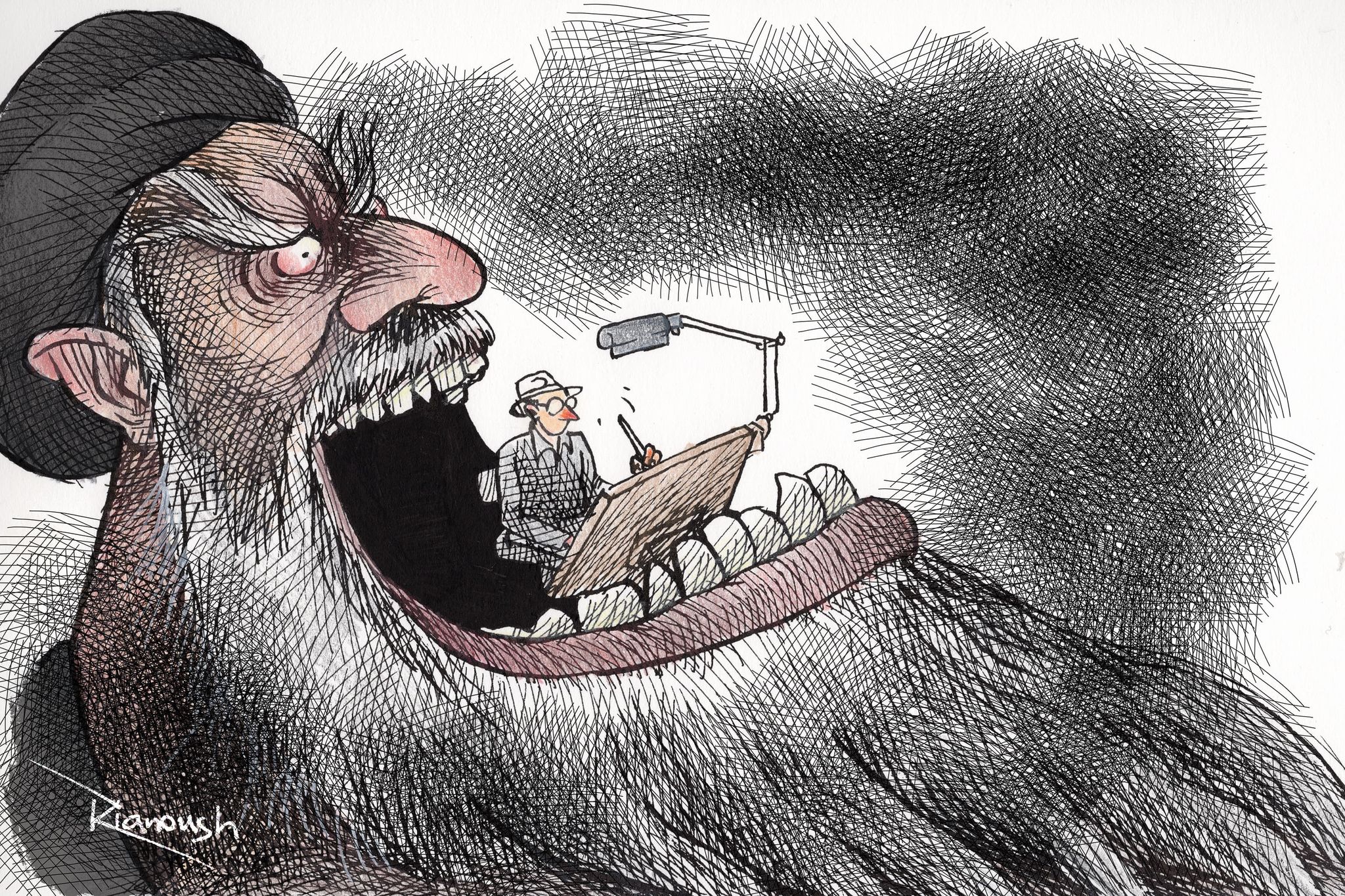 He enrolled at Gilan University and began his studies in horticultural engineering. He exhibited his artwork during his freshman year and soon after began publishing his cartoons in local newspapers. He eventually abandoned engineering in favor of drawing. His art became both his weapon and his voice:

Luckily, I was good at drawing. I always had some picture in my mind. I knew I wanted to be a political cartoonist as a career. It was something I could do, something I could use to express myself. I saw a lot of injustice in society and utilized my cartoons to confront all of those wrongs.

Being a cartoonist in Iran was challenging undertaking due to the numerous red lines.

Cartoonists in Iran are monitored by both the regime and the Iranian House of Cartoon, an organisation that establishes standards for all cartoonists. Kianoush was not permitted to work because he was unable to comply with the rules. Financially struggling and under direct and covert threats to himself and his loved ones, he turned to the only outlet available to him — public galleries. Even that, though, grew too risky:

I tried hard to publish my work, but in order to do so, I realized that like any other cartoonist I had to practice self-censorship.

I knew that I would be blocked or kicked out from many places, but I simply couldn't accept the rules. I knew that there were heavy risks, but I couldn't stop myself. It was the only window to breathe.

I never had any motivation to leave my country until 2009, when the state became so violent and fearful of anything that it killed, imprisoned, and tortured peaceful green movement protestors. After a few months, they came after my friends one by one. That moved me, and I could no longer stay neutral. After that, I realized I was at risk, and that I needed to leave. 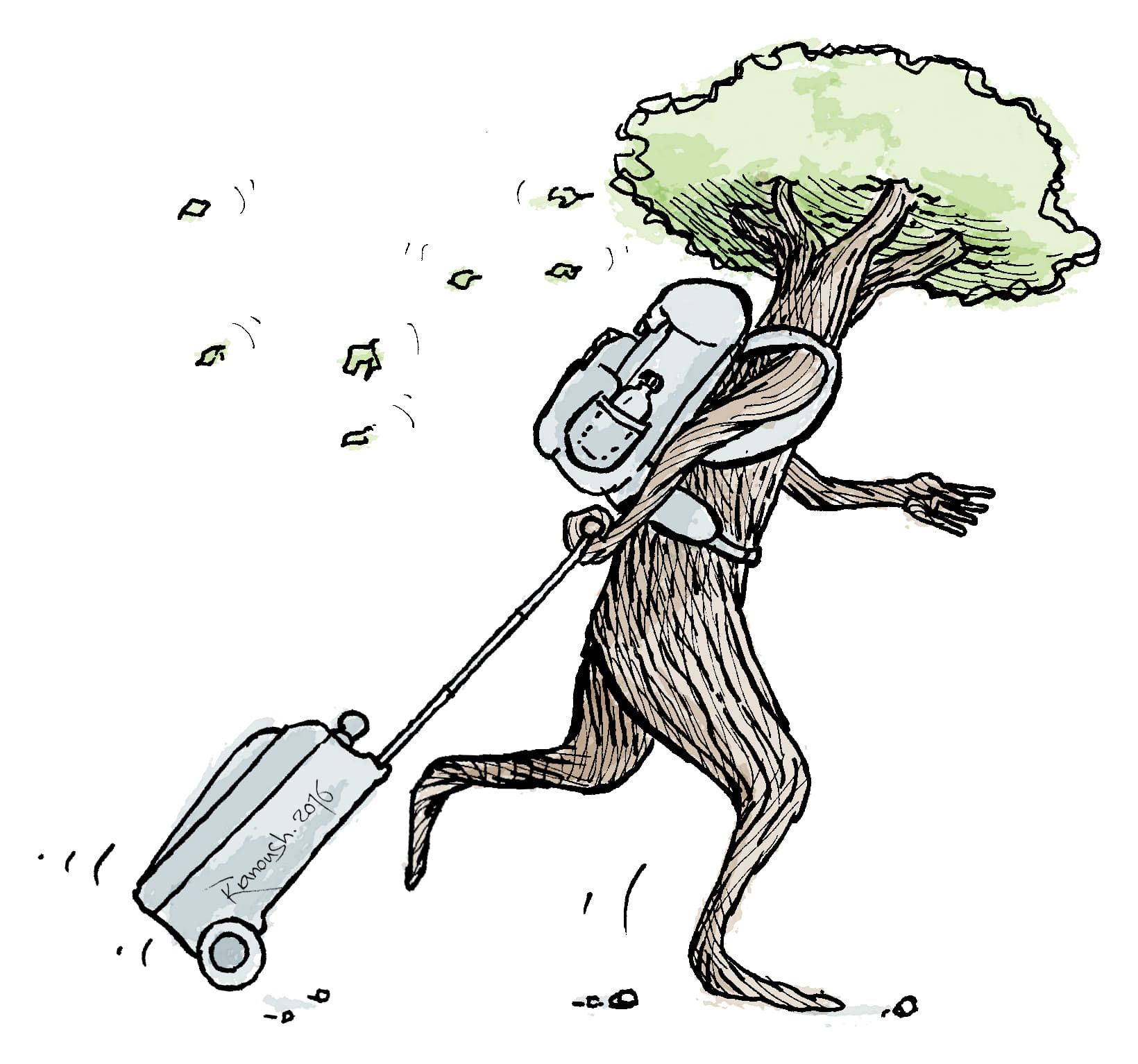 Kianoush's journey into the diaspora began there, where he quickly became aware of the realities of being a refugee in a strange land:

When I arrived in France, I realized that there is a terrible image of refugees in society and in the media, particularly among the right wing in France.

Despite the fact that I was suffering like any other refugee because I was in a country where I knew nothing, not even the language, I decided to project a strong image of myself. My misery was now doubled, if not tripled. I needed very basic materials to live, to survive, but I also needed to appear strong and to pretend that everything was fine. I felt that I'm partly responsible for the image I'm painting of myself and other refugees.

That helped me in maintaining my own professional work. I found a way through reporters without borders and then I was able to find my own way slowly.

During those days, however, I was overcome by nostalgia. Every night, I missed my hometown and my family. It was a struggle, but I could not let myself fall apart.

The everyday life of a cartoonist in exile

Since 2019, Kianoush has had a weekly column in one of France's oldest newspapers, La Croix, in which he draws political cartoons about France, but he also draws cartoons about Iran on a regular basis.

Being a cartoonist is not a 9-to-5 job. It is more of a 24-hour, seven-day-a-week job with no weekends or vacations. Things can happen at any time, and he must always be prepared to create something on very short notice at times.

Fortunately, observing the world around him gives him a lot of material to draw inspiration from:

In order to be a political cartoonist, you must be a philosopher and observer of your own society and the whole world. We live in a world where something happens every hour.

I think it is critical for cartoonists to have access to a real source of material. And for me, as someone who no longer lives in Iran, I have to trust my sources who live there, and by following them, I can get what I need to be a political cartoonist.

Kianoush creates incredible works of art with many detailed fine lines, but he never uses text. His work elicits emotional responses, and he wishes to convey the message solely through his art:

Personally, I don’t use words in my cartoons. It is a challenge that I set for myself, I sometimes regret it, but I’ve gotten by so far. I would like to express my message only by pictures. You don’t need to read or to know the language to understand the cartoon. It has its own language, a universal language.

Stay tuned for more of Kianoush's art work and thoughts on the most recent events in Iran.