Billboards with political propaganda are prohibited in Brazil, expert says

One of the billboards taken down in Passo Fundo, in the state of Rio Grande do Sul | Image: Ingra Costa/Used with permission

On Sept. 5, less than a month before the first round of Brazil’s elections, the electoral courts ordered the removal of two billboards showing the image of current president Jair Bolsonaro (PL, Liberal Party) in Passo Fundo, in the southern state of Rio Grande do Sul.

The decision was the result of legal action taken by two candidates running for Congress in an opposition party, the PSOL (Socialism and Freedom Party): the current state Congress member Luciana Genro and Ingra Costa, a candidate for federal Congress member. And it was shared on social media by Costa. 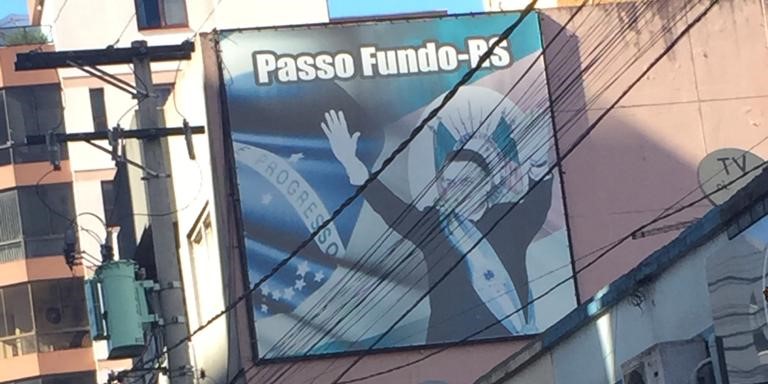 Another billboard taken down in Passo Fundo (Rio Grande do Sul) before the 2022 electoral campaign | Image: Ingra Costa/Used with permission

From giant billboards in cities to smaller ones alongside highways, or in the federal capital — with messages of support or criticism, some comical, others with fake news — billboards with political themes have spread across Brazil in recent years. Those referring to Bolsonaro seem to be the most common.

In the region where the candidates brought this case, they are nothing new, as Ingra told Global Voices. During the campaign period, old billboards in support of the current president have been restored and new ones have been put up, despite being against the law.

Last year, a similar billboard in support of former president Luiz Inácio Lula da Silva (PT, Workers’ Party) was pulled down in Passo Fundo by a group using a chainsaw. After being jailed for 580 days and then having the cases against him annulled, Lula has been ahead in opinion polls for the first round of the elections, scheduled for Oct. 2.

With the removal of billboards by court order, Costa recounted having become the victim of intimidation. In around five audio messages, to which GV had access, a man (who identifies himself, but is not an acquaintance of hers) says he will “make a prayer to take the demons out of her life” and talks about “setting fire to the devil.”

He called the candidate, who supports issues such as feminism, the rights of LGBTQIA+ people, and of religions of African origin, “a disgrace to Christians, to evangelicals, to believers” and said he would also go to court if he found billboards of her and Luciana in the city.

Costa filed a police report against him:

The electoral process has various rules that ensure its integrity and they must be respected by all candidates, regardless of which party or office they are in.

The electoral rules apply to everybody and all electoral propaganda must be within the law. They are not ‘special ones’ [who can] do whatever they want. Even though they are not used to acting within the law, we will continue to demand [it] and do our part.

During an event by Bolsonaro supporters to celebrate 200 years of Brazil's Independence on Sept. 7 in Passo Fundo, her name was mentioned and booed. A statue of Bolsonaro made of scrap metal, also in the city, was ordered to be removed by the electoral justice. 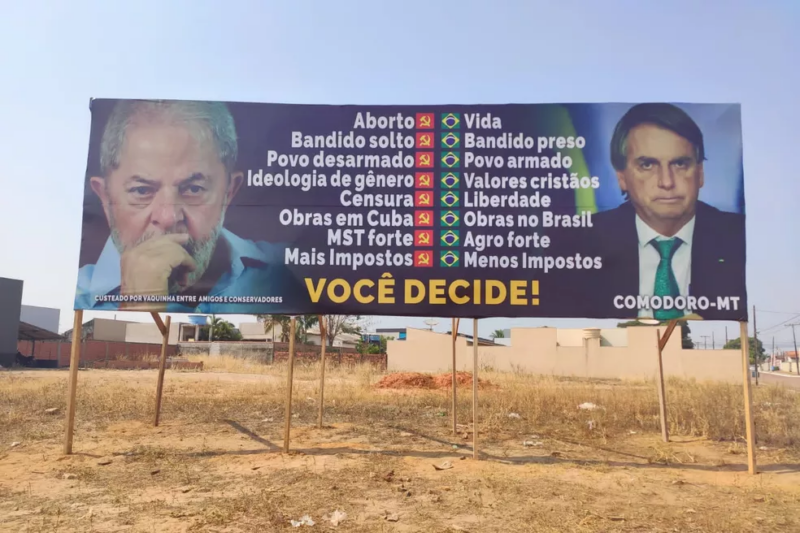 In August in Porto Alegre, the capital of Rio Grande do Sul state, Bolsonaro supporters put up a billboard alleging that left-wing people were linked to drug trafficking and censorship. The giant billboard was removed following a court order.

A survey by the news website G1 shows that the electoral courts have ordered the removal of billboards of this nature, alleging that the political left is linked to crimes, in at least eight Brazilian states during the electoral period.

Federal law prohibits the use of billboards for electoral propaganda in Brazil, which can lead to fines of between R$5,000 and R$15,000 (about US$980 and US$2,940). The ban applies to the electoral and pre-electoral periods, because conduct prohibited in the campaign is also prohibited in the pre-campaign, according to an expert consulted by GV.

Outside these periods, if such billboards are put up, a fine is imposed if an electoral objective is proven.

On Aug. 30, the Superior Electoral Court (TSE) fined the Farmers’ Cooperative of Paraiso, in Mato Grosso do Sul state, R$5,000 for putting up election propaganda on billboards.  This, and other such cases placed in the countryside and on farms, had already been reported by the website UOL in January, ten months before the elections.

In February, a judge from the court rejected a lawsuit by the Workers Party, considering that there was no electoral propaganda in the messages. The party then filed an appeal.

The Workers’ Party’s claim was directed against the cooperative and Bolsonaro, seeking an investigation into possible abuse of economic power (punishable by disqualification and ineligibility) by the president.

The Superior Electoral Court, however, dismissed the claim against Bolsonaro because it considered that there was no evidence that he knew about the irregular propaganda.

What the law says

A query made to the Superior Electoral Court by the website G1 revealed that at least 25 complaints of irregular electoral billboards were lodged in 2022.

Two of the billboards made comparisons between the candidates, praising Bolsonaro and referring to the former president Lula pejoratively.

On those making comparisons between candidates, images such as the socialist hammer and sickle are attached to left-wing candidates and Lula, while the Brazilian flag is reserved for Bolsonaro and right-wing conservatives.

The lawyer Tailaine Cristina Costa, who specializes in electoral law and administrative law and is a member of the Paraná Institute of Electoral Law (IPRADE), told Global Voices:

The billboard polemic is linked to the issue of the cost of this propaganda, because it provides exposure and it benefits those who can pay more. Note that the prohibition happened a long time ago. However, before the election, it is not prohibited, provided that the person does not show any political-electoral connection in the content. There are some who argue that there should not be a ban, but a limitation.

What comes under discussion in the question of limitations, also, is the fact that an individual can hire a billboard to convey some celebration or gratitude, which generates visibility but has no declared political-electoral purpose. What is prohibited is to sign it as a candidate or pre-candidate.

She added that there is a defined size limit for propaganda on signs and billboards:

Previously it could be up to 4m², but recently the limitation has been 0.5m², with the exception of the central committee [of the campaign], which can have larger ones, but not exceeding 4m². The reasons for the discrepancy are precisely because of the prohibition of billboards, such that these limits were then developed.

As for the so-called “lambe-lambe” (posters of various sizes that are placed in public spaces), the lawyer clarified that they must have a maximum size of 0.5m², without being side by side.

Regarding the effective enforcement of the law, she said:

Anybody can report an irregularity. If the case is blatant, the judge may order its immediate removal, but if it requires investigation, it will be verified if it actually exceeds the limits and [if so] its removal will be ordered and the candidate will be fined