'Man and machine. Preparation is key' 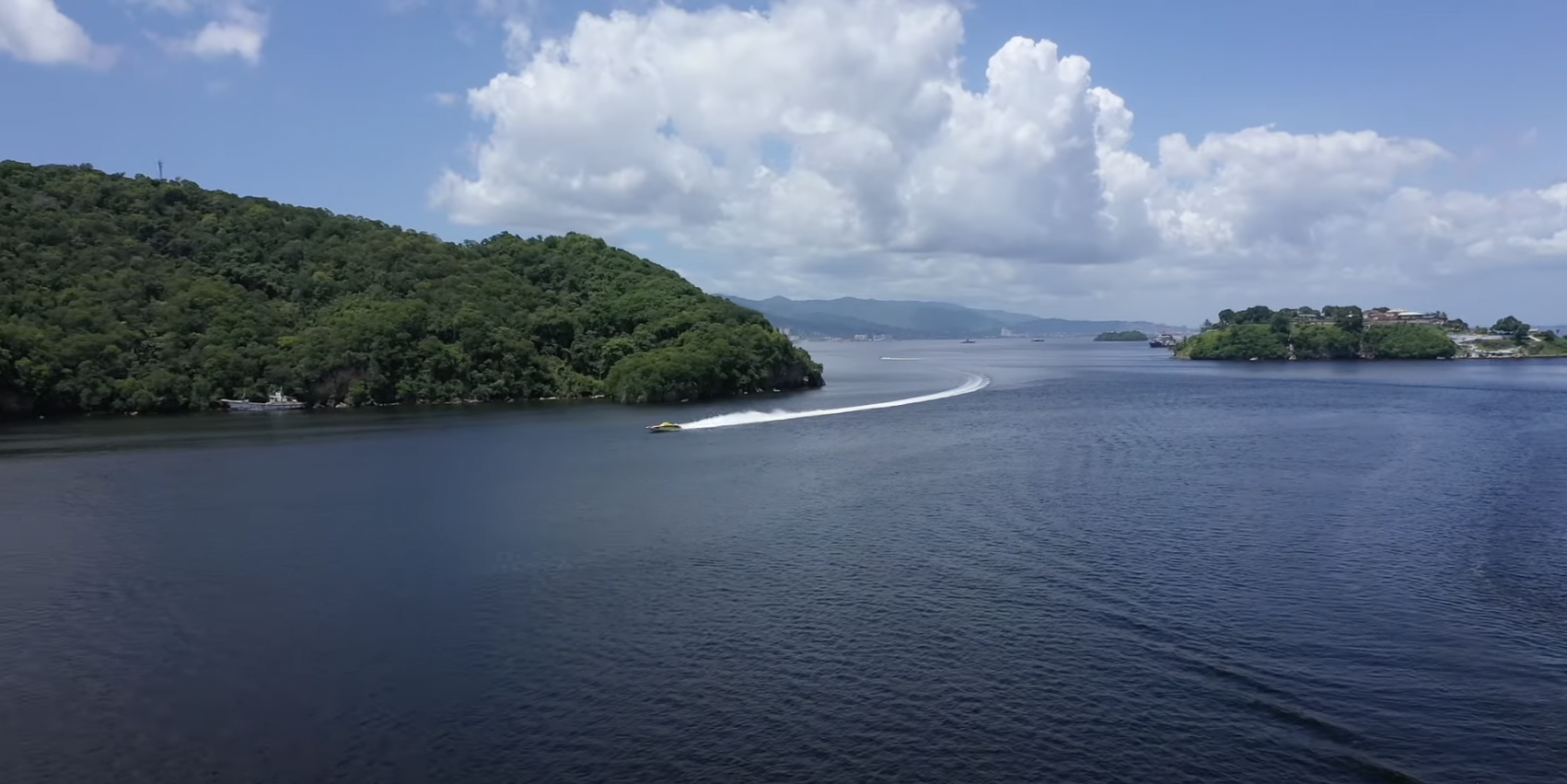 A screenshot from the YouTube video ‘Motul Monster Great Race 2021 Prep,’ by Marcus G Productions, which shows the boat in practice runs for The Great Race. Motul Monster won the event in both 2021 and 2022.

As the crow flies, the distance between Port of Spain, Trinidad to Scarborough, Tobago, is about 65.25 miles (105 kilometres). Each year, however, as the local power boating fraternity embarks on the Great Race — an open water dash between the two islands that ranks as one of the longest running powerboat races in the world — the distance the speedboats cover is about 80.5 mi (129 km).

The 2022 edition of the race, which took place on August 20, saw the fastest boat, Motul Monster, clocking the distance in just over an hour:

Monster unofficially finished in approximately one hour and ten minutes in the race which started at the Mucurapo Foreshore in Trinidad and ended at Store Bay in Tobago.https://t.co/HQjHHgotSN

Because the contenders compete in various classes, there are several winners, but the fastest boat to Tobago remains the most coveted title, even from the race's humble beginnings.

Prior to the 2022 event, The Trinidad and Tobago Powerboat Association (TTPBA) shared a Facebook post that revisited how the event was founded, more than 50 years ago. The concept was dreamed up by Ken Gordon, who at the time was “escorting yachts from Trinidad to Grenada over the [1968] Easter weekend and […] thought he was on to something.”

Gordon discussed his idea with some of his peers, including powerboat racing stalwarts like Ken Charles and Brian Bowen.

On August 2, 1969, their dream came to fruition as the first ever Great Race was held. A field of 62 boats ranging in size from 13-21 feet sped off from the Trinidad and Tobago Yacht Club along Trinidad's western peninsula to conquer what was then a 72-mile course to Store Bay, Tobago. The inaugural winner was Camena, a 21-ft wooden boat with a Deep V hull, which successfully completed the course in just over two and a half hours. However, only a small portion of competitors managed to complete the challenge:

From 1970 onwards, those who dared to attempt the ‘Great Race’ realized that preparation was the key to success.

In the years that followed, as spectators began to pick their favourite boats, a trend began to emerge:

Charles had commissioned Brian Bowen to build Mr. Solo, a decision many felt “took the passion he had for the sea to a whole new level […] thus creating one of the most enduring brands in Power Boat Racing.” The boat was given the name not because Charles felt he could accomplish this feat alone, but because he wanted to pay homage to the Solo soft drink brand that was the flagship of his family's beverage business.

By 1975, a new challenger was on the scene, and it was also soon to become a household name. Checkmate, a 28-foot Bowen, took part in its first Great Race and won in just an hour and 13 minutes, a time which still remains the fastest on that particular course. Bowen boats, Beep Beep in 1977 and Mr. Solo with its fourth title in 1978, continued to speed to glory in those early days, with the brand dominating eight times in 11 years.

Those were the days. […] Although boats have changed, the GREAT RACE is what it is. Man and machine. Preparation is key.

Great précis of the years of the running of the great race. So many more facts and ‘Stories’ can be added and make a great story movie. The Great Race has produced many gutsy boaters, with many running on shoestring budgets. May this wonderful race never die.

Ken Charles’ Mr. Solo team, in its various iterations, has won The Great Race “Fastest Boat” title 18 times in the event's 53-year history — an astounding 34 percent. He made it a family affair, with his children being part of his crew. Powerboat racing is a dangerous sport, however, and in August 1993, tragedy struck, albeit not at The Great Race. Charles and two of his sons, Sheldon and Curtis, were competing in Antigua’s South West Coast Powerboat tournament when Mr. Solo encountered a swell; the boat became airborne, disintegrated on impact, and both sons died. The entire country was touched by the tragedy.

Despite his grief, Charles did not abandon the sport he loved. Mr. Solo, as a Formula III boat, made a comeback three years later as the fastest boat in the race. It would go on to repeat that honour every single year from 1999-2004. For the last two years of that run, another of Charles’ sons, Hayden, was part of the crew, and remained so from 2007-2009, when Mr. Solo also pulled off a hat trick.

This year, the crew included Hayden, and Charles’ grandson, Joseph, but the vessel encountered some mechanical trouble and could not complete the course:

Motul Monster won the 130-mile class in Saturday's event. But rival Mr. Solo Too had to abort the race following mechanical issues while in the water.

Here's a wrap on all the results… https://t.co/RqpEltHJME

Bad weather on race day may not have helped the situation, but as the TTPBA website noted:

Every year there are many breakdowns so only the best prepared boats are the ones to finish. Just finishing the race is a massive accomplishment.

Ken Charles, meanwhile, has been listed in the Guinness World Records as the world's oldest professional powerboat racer, with a note that he was “awarded a lifetime membership from the TTPBA, for his participation and contribution” since his involvement in the sport in 1970.

In a follow-up Facebook post, the TTPBA continued the event's retrospective by looking at powerboat racing in the 1980s, a decade it felt offered some of the most exciting racing. This was also the era in which a woman won the race for the first time:

We saw our first and only female champion Carol See Tai team up with her brother Larry to win in their 28 Pantera in 1983.

The '80s also heralded the decline of the Bowen hull's dominance. Charles, a longtime Bowen believer, began experimenting “with the first foreign hull, a 35 Cigarette, and won in 1981.” The introduction of a 30-ft. Shadow Cat, which won the event in 1984, started a debate, which the TTPBA maintains “still continues,” on whether Deep Vs or Catamarans perform better in rough water:

It is still said that 1985 is the best and closest Great Race finish in history, when Mr. Solo came from behind and beat King Sailor by a few meters.

What the 80s was remembered for was the rivalry between Ken Charles and Carlos Sabga, Mr. Solo vs. Checkmate, which went well into the 90’s. During this exciting decade, Mr. Solo won it twice [though] Checkmate was the first team to do the repeat in 1987 and 1988.

Towards the end of the decade, however, Bowen began to reassert itself, making a comeback with a bigger boat. It was heartening for the fraternity to see such a strong local brand reaffirm its relevance, particularly following the untimely death of founder Brian Bowen, who died after being hit by a driver while cycling in 1989.

While Trinbagonians are proud of their Great Race history — the event usually draws crowds at various spectator points and the weekend of the race has become a real party scene in Tobago — there is one thing many people can do without. Each year, about two weeks before the event, there is a Great Race boat show that sees the competing vessels paraded through the streets. It is a tradition that, despite a police presence aimed at re-routing traffic, blocks main thoroughfares and causes dense pile-ups, with many drivers rendered immobile for hours. While some enthusiasts appreciate the opportunity to see the boats up close, others, like Facebook user Kathleen Maynard, remain unimpressed:

Just wish they would stop the street boat parade in St James on a Saturday morning.

Even if the TTPBA reconsiders the parade in future years, the Great Race seems here to stay. Despite people staying away and sponsors cutting back on their level of support since the start of the COVID-19 pandemic, the race goes on.