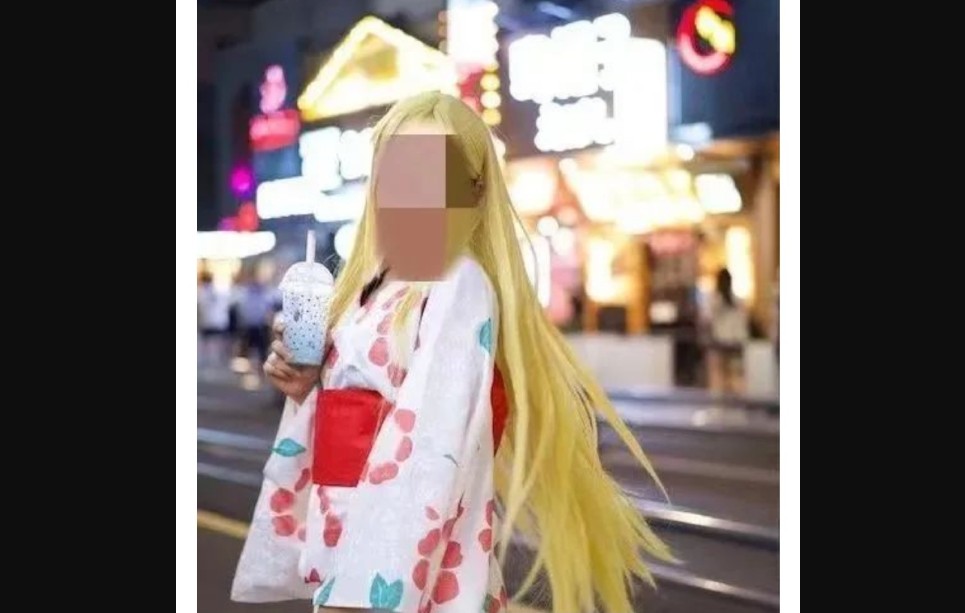 A photo Xiao Ya has taken on August 10, 2022. Screenshot from a now censored post on Weibo.

This summer, China's online cultural warfare against Japan reached new heights after a series of Japan-related controversies, such as the cancellation of Summer Matsuri festivals in several cities. The latest episode occurred on August 10, 2022, when a police officer from Suzhou city in Jiangsu province arrested a woman for wearing a traditional Japanese Kimono while taking photos on Huaihai street, a Japanese cuisine district.

She was accused of “picking quarrels and provoking trouble,” an allegation commonly used to clamp down protests.

As anticipated, online nationalists supported the police officer’s action and slammed the young woman for offending Chinese people, yet many others have spoken out against the police’s abuse of power and xenophobia. After the online backlash, Suzhou police returned the confiscated Kimono to the young woman on August 19.

Manya Koetse, the chief editor of  What's on Weibo, a blog on China's social media trends, reposted the video of the arrest scene on Twitter:

A young Chinese woman was taken away by local police in Suzhou last Wednesday because she was wearing a kimono. “If you would be wearing Hanfu (Chinese traditional clothing), I never would have said this, but you are wearing a kimono, as a Chinese. You are Chinese!” pic.twitter.com/et8vWOferQ

The young woman, under the pseudonym Xiao Ya, was cosplaying as Ushio Kofune, a fictional female character from a popular Japanese animation “Summer Time Rendering.”

As shown in the video, during the photo shoot, an agitated police officer approached her and the photographer saying, “I wouldn't have said anything if you wear a Chinese Hanfu, would I? But Japanese Kimono? How dare you, as a Chinese? Are you Chinese? You are a Chinese!” He shouts at the woman, despite her attempt to explain the photoshoot.

In the video, the police officer said her offence was “picking up quarrels and provoking trouble” but did not explain further before forcibly escorting and detaining her at the local police station.

Xiao Ya first told her friends about the police encounter on QQ space, a popular social media platform, on August 12. The post was later republished on Weibo and went viral.

She revealed that as soon as the police escorted her to the station, they seized and inspected the content of her phone, including photos and online chat records. The police also deleted her cosplay footage, confiscated her kimono-styled costume, and asked her to write a self-criticism letter of 500 words. The police interrogation lasted five hours, and she was told not to discuss the incident online. She also believes that the police had contacted her photography school to ensure she was properly “educated.”

In a separate interview with Beijing Youth Daily (now censored), she revealed that in her 500-word essay, she was told to admit that wearing Kimono was a “dangerous act.” However, she argued in the interview that the subculture of ACG (Animations, Comics, and Games) is not at odds with Chinese patriotism:

Besides ACG subculture, I also like Chinese traditional culture. During the 2018 summer holiday, I travelled to Japan with my family and friends and brought with a set of Hanfu [clothing during the Han Dynasty] and wore them on the streets of Kyoto and Osaka… I felt pride when explaining what I wore. For me, Hanfu and Kimono both look very pretty. We ACG lovers are very patriotic too.

As of August 23, the short video, her first-person account on QQ space, its republication on Weibo, and her interview with Beijing Youth Daily have all been censored on social media.

As nationalism surges in China, young people who enjoy Japanese cultures are under tremendous pressure, and their interests are often distorted and politicised. This year, private venues, including hotels and shopping malls in many cities cancelled the Summer Matsuri festivals following boycott calls from Chinese nationalists.

Chinese online nationalists have even been spreading conspiracy theories that the kimono incident is tied to August 15 — the anniversary of Japan's surrender during World War II and the end of the Second Sino-Japanese War.

Xiao Ya’s cosplay and her account were distorted as a political act to undermine and humiliate China’s victory against the Japanese invasion. Below is a typical nationalist reaction on Weibo:

Why she wore [the kimono] on August 10, published the post on August 14, to let it make an impact on August 15. She has an ill intention. Check on her family, they probably have a history as traitors.

Chinese state-owned media outlets often quote this date to symbolise the victory in successfully warding off the Japanese invasion of China in 1945 with the resistance of the Chinese Communist Party.

For some nationalists, wearing Kimono is viewed as “hurting Chinese people’s feelings.” Here is one such comment from Weibo:

[Kimono] is the clothing of the perpetrator country and [she] chose to wear it on a special date in public. This is hurting our national feeling, and we won’t allow that!!!

In recent years, Japanese culture lovers are often labelled as Jingri (精日), literally translated as spiritually Japan, a derogatory term in China for people of non-Japanese descent that support Japanese imperial and military ideology. Xiao Ya is facing a smear campaign and has been labelled a Jingri by nationalist influencers, including Weibo user @raffaelloliu for showing off her Kimono in Chinese streets.

Despite these criticisms, this time, the nationalists have not successfully dominated public sentiment. Many Chinese netizens have been sharing photos of Chinese national heroes in Kimonos to counter increasing xenophobic narratives, as highlighted by Chinese writer @GaoFalin:

Many netizens also criticized the officer's abuse of power during the Kimono incident. A Weibo user summarised the reasons behind the public outrage:

There are three reasons behind the public outrage:

After the backlash, the police returned the Kimono to Xiao Ya, and the censorship authorities deleted related viral content.