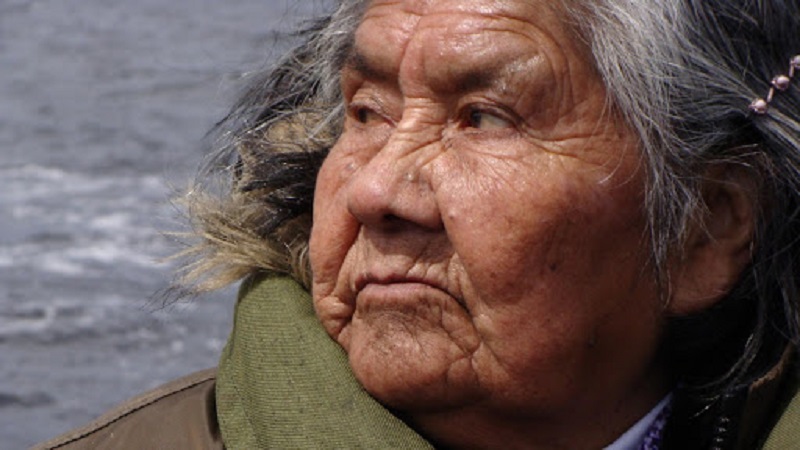 Photo of Cristina Calderón. Used with the permission of her granddaughter Cristina Zárraga.

Abuela Cristina Calderón, who passed away on Feb. 16, 2022, at the age of 93, was beloved by the Indigenous Yaghan community of Bahía Mejillones, located in Puerto Williams on Navarino Island, at the southernmost tip of Chile. As the last known speaker of Yaghan (known as “Yágankuta” by the Yaghan community, and also as “Yamana” in scientific literature), she represented one of the last living links to the world of the Yaghan ancestors. She was affectionately called Abuela Cristina (Grandmother Cristina).

A language represents a doorway into understanding the depth of the human experience through the eyes of cultural stakeholders. Its loss means that the link involved in transmitting a language from one generation to the next has been broken. Unless the knowledge held in the language is documented, it will not be available to the community for future use. Before her passing, Calderón made sure her language would be safeguarded through books and other resources.

Calderón’s parents were part of the last generation that participated in Yaghan traditional coming-of-age initiation rituals known as Čiaxaus, an ancient spiritual practice where boys and girls prepared for life as adult members of their community by undergoing physical trials and learning survival tactics. Throughout her life, Calderón witnessed first-hand the tremendous upheaval caused by ongoing colonization of Yaghan territory by European settlers as well as the cultural assimilation of her people through missionization, displacement from traditional lands, and discrimination against the nomadic way of life. 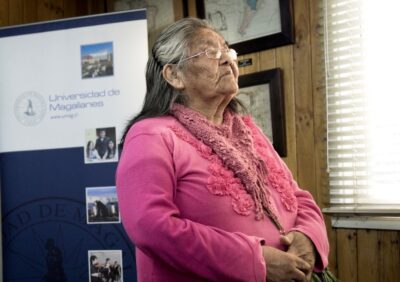 The Yaghan are Indigenous to Tierra del Fuego, known as Onaašáka in their language, in the southernmost region of South America. The Yaghan people have occupied this region for over 10,000 years. Their language reflects a close relationship with the land and sea and all the species in it.

According to her granddaughter Cristina Zárraga's essay in Langscape Magazine, Calderón grew up speaking only Yaghan until the age of 9, when she began learning some Spanish, English, and other Indigenous languages spoken nearby. She lived a semi-nomadic way of life while growing up close to nature, traveling by boat to numerous places in Tierra del Fuego before the border of Chile and Argentina divided the region into two different nation-states. Calderón was orphaned at a young age and was raised by her relatives and godmother. At that time, many Yaghan, unfortunately, died of lung disease, and Calderón’s parents were no exception.

Her family's subsistence strategies included shearing sheep in the summertime and hunting local animals such as guanaco and otters at other times of the year. Calderón enjoyed many freedoms, such as hunting and traveling freely by boat in traditional Yaghan territory, but also endured various hardships. In order to secure her safety, her family encouraged her to marry a much older man at the age of 15. She survived poverty, displacement, and many social changes over the course of her long lifetime. She became a master basket weaver and was recognized for her skills. Towards the end of her life, especially after the passing of her beloved sister Ursula Calderón with whom she used to speak in Yaghan, she became widely revered as the last fluent speaker of the language.

Calderón’s impact as the last speaker was felt locally in Tierra del Fuego and worldwide. She was recognized as a Living Human Treasure by the Chilean government in 2009. She made frequent media appearances and was focused on sharing her language with those around her. She was outspoken about the severely endangered status of Yaghan and took an active role in producing numerous materials in Yaghan. The many works of literature and art she left behind will become primary source material for Yaghan revitalization efforts now and in the future. 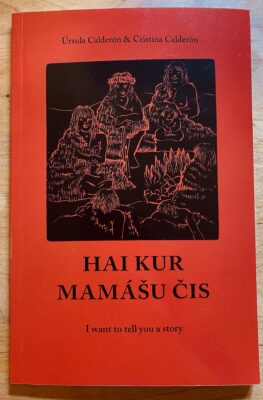 Cover of the book “Hai kur mamášhu čhis” (I want to tell you a story) by Cristina Zárraga and Ursula Calderón.

The depth and beauty of the Yaghan language can be appreciated and learned by reading “Yágankuta: A Little Dictionary of Yagan”— an illustrated book that was produced by Cristina Calderón and her granddaughter Cristina Zárraga in collaboration with researchers and artists such as Oliver Vogel, Yoram Meroz, Anna Kolle and others.

There is also a Yaghan wordlist of 715 words compiled by linguist Ana María Guerra Eissmann available online through the Intercontinental Dictionary Series. A book of Yaghan folktales recounted to Zárraga by Cristina Calderón and her sister Ursula Calderón, entitled “Hai kur mamášhu čhis” (which means “I want to tell you a story”) is available on Amazon, originally published by Ediciones Pix, a publishing house based in Chile and Germany. Cristina Zárraga also wrote her grandmother’s biography in Spanish in the book entitled “Memorias de mi abuela yagan” (Memories of my Yaghan Grandmother).

Calderón’s passing represents a monumental loss. As the last speaker of Yágankuta, and one of the last witnesses to traditional Yaghan life, she had the fluency and knowledge to express her culture in ways that no one else can today.

Yet, her granddaughter Cristina Zárraga recently told Chilean magazine Pousta in an interview that Calderón did not want to be seen as the last Yaghan person. “I'm not the only one, nor the last. Look around here, it's full of Yaghans,” she would observe, referring to the presence of Yaghan descendants in her community. She was the last speaker, but not the last Yaghan. 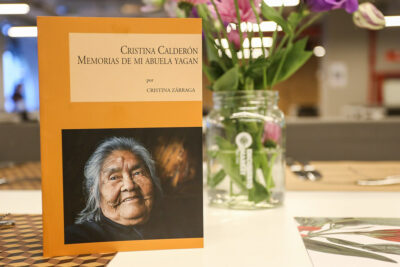 Zárraga is now making grassroots efforts to protect the environment as well as share the Yaghan language by holding Zoom meetings for language learners. Her other relatives reside in Bahía Mejillones on Navarino Island in Chile, where they keep their culture alive in many forms and are active in protecting the rights of Indigenous people in Chile.

Thanks to Calderón's legacy, there is a lot of material for new speakers and heritage learners to learn from. These are all ways that her grandmother's legacy will stay alive.