Hong Kong: Pillar of Shame is gone, along with the city’s freedom of expression 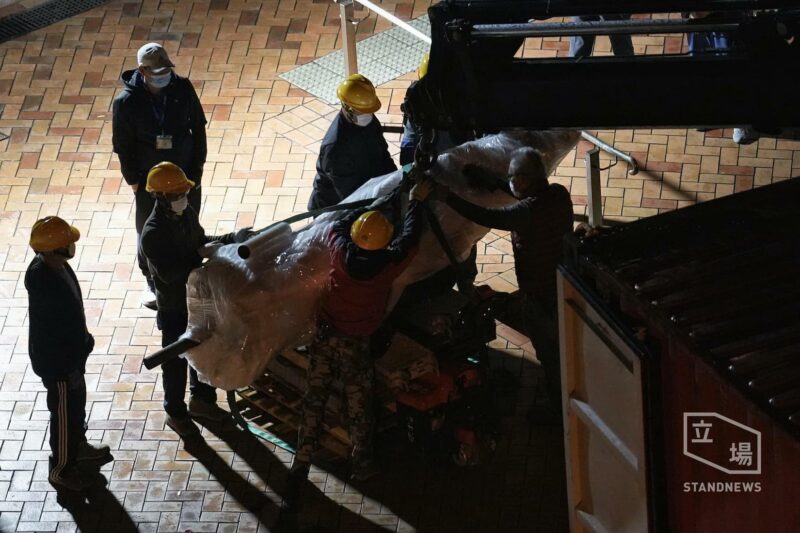 The tip of the Pillar of Shame is wrapped and put inside a container. Image from the Stand New. Used with permission.

A most evocative monument to the Tiananmen Massacre, which stood in the University of Hong Kong for 24 years, since June 1997, was removed by the school administrator before dawn on December 23, 2021.

The 8-meter high concrete sculpture is part of the art series known as Pillar of Shame created by Danish artist Jens Gaischiot in 1996.

The Hong Kong pillar is composed of 50 distorted faces which represent the pain and despair inflicted on people by the bloody crackdown of the pro-democracy student movement in Tiananmen in 1989.

It was exhibited at Victoria Park on June 3, 1997 as part of the activities in commemoration of the eighth anniversary of the Tiananmen Massacre. After the candlelight vigil, a group of student activists moved the 2-tonne statue onto the podium of Haking Wong Building at the University of Hong Kong. Two weeks later, on June 16, it was re-erected on the spot, just 15 days before the handover of the colonial city to China.

As the pillar landed on the university campus, Jens Gaischiot commented that it would represent a touchstone of Hong Kong’s freedom of expression.

The university authorities decided to remove the pillar in October of 2021. It issued a letter to the host of the candlelight vigil, the Hong Kong Alliance in Support of Patriotic Democratic Movements in China (HK Alliance), asking for the removal the pillar on October 13, but the now-dissolved organization replied that it did not own the statue. At the same time, Jens Gaischiot warned that he reserves the right to claim damage should the authorities dismantle the pillar.

Despite internal legal advice against the act, the authorities sought external legal advice and risk assessment and ordered the removal action on December 22. According to the university’s statement, the legal advice cited the Crimes Ordinance written in the colonial era, rather than the national security law imposed by Beijing as the legal risk:

No party has ever obtained any approval from the University to display the statue on campus, and the University has the right to take appropriate actions to handle it at any time. The University is also very concerned about the potential safety issues resulting from the fragile statue. Latest legal advice given to the University cautioned that the continued display of the statue would pose legal risks to the University based on the Crimes Ordinance enacted under the Hong Kong colonial government.

AFP’s Hong Kong correspondent Su Xinqi is one of the reporters who bore witness to the dismantling process:

The #PillarOfShame has been dismantled into two parts , wrapped , boxed and sent away . All done before dawn. pic.twitter.com/950B2aKVQ0

Workers started to barricade the dismantling site 11 p.m. on December 22, just days before Christmas, when the majority of students have left the campus for the winter term break. Berlin-based journalist Clifford Coonan highlighted the significance of the timing:

As they tear down the Pillar of Shame, it's worth remembering the holiday period is a busy time for the Chinese government, as it knows the Western media is on holiday — Liu Xiaobo was sentenced on Christmas Day, Hu Jia arrested on Christmas Day and Wu Gan jailed on the holiday

Jens Gaischiot described the university’s action as a disgrace in a statement:

[I]t is a disgrace and an abuse and shows that Hong Kong has become a brutal place without laws and regulations such as protecting the population, the arts and private property… And it’s even more grotesque that they use the Western holiday, Christmas, to carry out the destruction of the artwork.

Reuter's correspondence Jessie Pang showed the empty space after the pillar was removed:

The original site of #PillarofShame now looks like this: pic.twitter.com/2p0b5po1sQ

The pillar is currently stored in the Kadoorie Center of the Hong Kong University in Yuen Long.

On Twitter, many described the sneaky act of the university as an act of shame. Twitter user Lily Wong is among one of these voices:

Pillar of Shame: Hong Kong's Tiananmen Square statue removed – the fact that removal was done overnight says it all. This is an act of shame that the whole world has witnessed. https://t.co/52T91Am5Lx

However, the disappearance of the pillar will not destroy people’s memory of the past, as pointed out by Nathan Ruser, research from Australian Strategic Policy Institute (ASPI):

Removing the Pillar of Shame from @HKUniversity does absolutely nothing to make people forget the massacre of student protesters, it just serves as a massive flag that the space for even passive remembrance has disappeared.

Alejandro Alvarez, a journalist and photographer, believes that the removal of the pillar marks a new chapter of the purge from political acts to the artistic expressions of them:

these images are telling.

the Pillar of Shame has been housed at HKU since 1998. if it's really coming down (seems likely, with machinery being heard and a cargo container nearby) it's another chapter in the purging of the city's opposition, from politics to art. pic.twitter.com/1uaIgLQ8uZ

Hong Kong was once the only place in China where people could openly commemorate the Tiananmen massacre. However, the annual candlelight vigil was outlawed the first time in 2020 citing pandemic health concerns, and banned again in 2021. HK Alliance was forced to dissolve and three key organizers, Albert Ho, Lee Cheuk-yan and Chow Hang-tung were arrested and charged for “incitement to subversion” with their bails rejected. The trio, among other key members, were convicted of inciting and participating in illegal assemblies in 2020 and began serving their prison terms earlier this month.