The convicted protester Tong Ying-kit could face life in prison 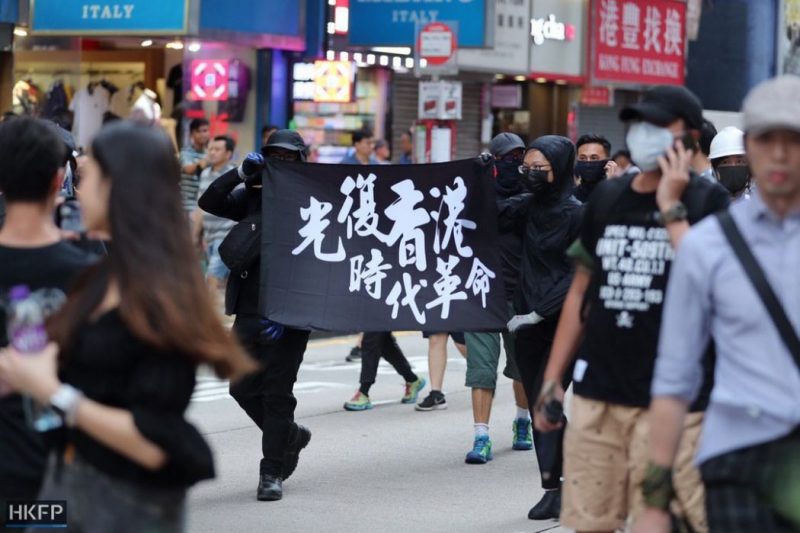 The popular protest slogan ‘Liberate Hong Kong, Revolution of Our Times’. Photo by May James of the Hong Kong Free Press. Used under a content partnership agreement.

The maximum sentence could be life in prison. The court adjourned the sentencing hearing to July 29, 2021.

Tong was arrested after his motorcycle crashed into three riot police officers. He was carrying a flag with a popular protest slogan ‘Liberate Hong Kong, Revolution of our Times’ on his motorcycle during an unauthorized protest on July 1, 2020, the date marked the anniversary of Hong Kong’s handover to China and was the first day after the NSL was enacted.

He was later charged with terrorism and inciting secession under NSL as well as dangerous driving causing grievous bodily harm. Tong pleaded not guilty to all charges.

It was the first trial under the Beijing-imposed NSL, which outlaws terrorism, secession, subversion and collusion with foreign forces. Many have been debating whether crashing a motorcycle into a police barricade could constitute an act of terrorism, and whether displaying a political slogan like ‘Liberate Hong Kong, Revolution of our Times’ during a protest could be considered ‘inciting secession’. A Twitter user posted a video showing Tong's motorcycle crash:

Back up.
No cops at the beginning, suddenly they charged at motorcyclist and he couldn't brake sharply.
An edited video is circulating and the motorcyclist is now in custody. pic.twitter.com/tu5XVbGSRA

Under the legal principle introduced by the NSL, Tong Ying Kit was denied bail and he has been under police custody for over one year. The Secretary for Justice, Teresa Cheng, refused to grant Tong a jury for the trial and instead the court was composed of three judges appointed by Chief Executive Carrie Lam. The judges were Justices Esther Toh, Anthea Pang and Wilson Chan.

During the 15-day trial between July 5–20, the prosecutor called on Lingnan University historian Lau Chi-pang to testify that the Chinese slogan ‘光復香港’ (Reclaim or liberate Hong Kong) could be interpreted as ‘recovering a regime or national territory that has fallen into the hands of the enemy or a foreign ethnic group’ while ‘時代革命’ (Revolution of Our Times) should be understood as a literal call for regime change.

On the other hand, the defence called on political scientist Eliza Lee and media professor Francis Lee to testify. Eliza Lee explained that the slogan was created by Hong Kong activist Edward Leung in 2016 to convey Leung’s political vision to ‘recover an old order that was lost, and unite freedom-loving people of all ages to bring about historical change’ while Francis Lee presented his research findings to show that the slogan is ‘ambiguous and open to multiple interpretations’ and not necessarily a call for Hong Kong independence.

The defence's request to set the legal standard of proof ‘beyond reasonable doubt’ was ignored, as the special High Court eventually passed a  ruling based on ‘all the relevant circumstances’, such as the timing of the protests and the undisputed understanding that the slogan was ‘capable of’ inciting others to commit secession.

Independent journalist Aaron Mc Nicholas looked into the verdict and highlighted the court’s rationality in the rule:

The court rejected the possibility that Tong could have had an innocent understanding of the slogan, since his WhatsApp conversations on July 1, 2020, showed that he was discussing a “safe spot” to move to in the event of trouble. https://t.co/ofAjHUloGX pic.twitter.com/9GjbbCK7Rr

As for the terrorism charge, the court accepted the prosecutor’s argument that the act of driving into police check line involved ‘serious violence against persons’ and ‘seriously jeopardised public safety or security’ and the guilty judgement was based on ‘the effect of intimidating the public’ rather than the grave harm that Tong’s action had caused or intended to cause to society.

Galileo Cheng, a citizen journalist who has closely followed the case and live-tweeted the trial further explained the court’s logic:

Thus, the interpretation of terrorist activities of #NSL by Court of First instance becoming:

To instill a sense of fear amongst the law-abiding members of the public, in particular, apprehension of a breakdown of a safe and peaceful society into a lawless one.

The ruling will likely set a precedent for future cases involving the NSL.

To convict Tong Ying-kit of ‘secession’ for displaying a flag bearing a widely used political slogan is a violation of international law, under which expression must not be criminalized unless it poses a concrete threat. This feels like the beginning of the end for freedom of expression in Hong Kong.

It's a political show trial.
The right to a jury trial is denied. The government handpicked the judges. The judicial system in Hong Kong is weaponized to suppress.