"Calling it a 'Pandemic of Patriarchy,' the protesters demanded the government increase the health budget so that women may get better healthcare." 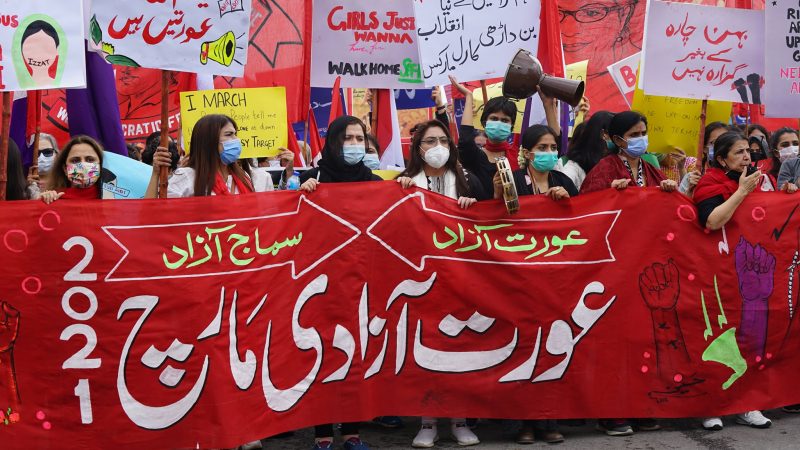 Women protested on International Women’s Day in Pakistan to reclaim their space in society, speak up for their rights, and demand justice from the system that has failed them because of patriarchal structures. This year, the Aurat March (Women’s March) protests also focused on the damage caused by the COVID-19 outbreak in Pakistan. Calling it a “Pandemic of Patriarchy,” the protesters demanded the government increase the health budget to 5 per cent of GDP so that women may get better healthcare.

For the fourth consecutive year, the Hum Aurtein feminist collective organised the protests across Pakistan, which took the form of marches, public art displays and performances highlighting challenges faced by women.

Among the issues the protests drew attention to was the significant increase in domestic violence and child abuse worldwide as families are families confined to their homes during the pandemic, with women deprived of proper healthcare or help—and that Pakistan was no different.

Aurat March Lahore is incredibly proud to share its #AuratMarch2021 manifesto, a “Feminist Manifesto on Healthcare”.

This document is a collective effort, put together after months of research & LISTENING. 1/5#PatriarchykaPandemic

Here is our 15 point agenda for this year! It is a condensed version of our complete charter of demands & focuses broadly on the theme of gender-based violence inflicted upon women, transgender & non-binary persons.#AuratMarch2021#PatriarchyKaPandemic pic.twitter.com/TApDaKfmz5

Islamabad focused on issues ranging from healthcare, economic justice and patriarchal violence to disability justice and the climate change crisis.

Our demands are linked to this year's theme of the crisis of care in the coronavirus pandemic. The issues we have highlighted range from healthcare, economic justice & patriarchal violence to disability justice & climate change crisis. pic.twitter.com/AeD9V9XJ2b

The Aurat March always touches upon pressing issues in Pakistan. Every year people come forward with personal accounts of friends and family who have been the objects of the male-dominated society.

It is easier to sit in cozy drawing rooms and nitpick on the social causes, in reality you can't even imagine stepping into the shoes of the victims rallying for justice!

This young man is from Chitral. He says Kalasha women are forcibly converted and married off. This is why he marches today. #AuratMarch #Karachi pic.twitter.com/uokFxGKADQ— Samaa Life&Style (@LifestyleSamaa) March 8, 2021

Art and protest in Lahore 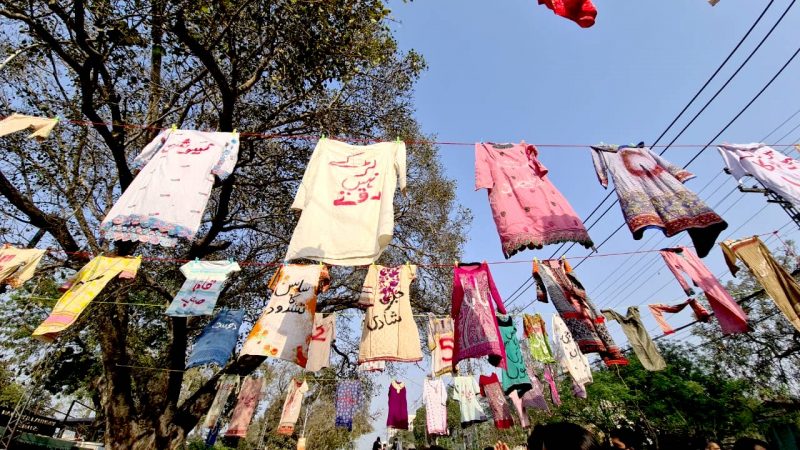 The Aurat March Lahore set up an art installation depicting the “patriarchal stains” on women's clothes, calling it “dirty laundry.” Messages from women and girls, mentioning the age at which they first encountered violence, harassment, emotional abuse or denial of freedoms, were displayed.

Artists and designers from across the country made feminist public art that told the stories of women, their ordeals, how they have suffered in society, highlighting the crux of the manifesto.

A #MeToo red cloth panel, with stories of abuse, harassment, violence, exposing the system that has failed them for ages, was also displayed.

TRIGGER WARNING// RAPE AND ASSAULT #AuratMarchLahore is unfolding its #metoo blanket. Women have shared their experiences of sexual violence and abuse. We're sharing small snippets from the blanket being carried by the marchers right now. (1)#PatriarchykaPandemic pic.twitter.com/cPZbhRJYyd

The protesters in Lahore also sang the Chilean feminist song “You are the Rapist” in Urdu, and Alina, a transgender woman, danced to a Sufi (mystic) folk song.

Women, girls, transgender and non-binary people, and also men of all ages, attended the march in Lahore, carrying anti-patriarchy slogans on placards.

Literally the best day ever!! pic.twitter.com/heXj3tp72U

Just days before the Aurat March was to be held, social media trends opposing it began going viral. One hashtag claimed that the Aurat March was foreign-funded and promoting Western agendas. People also said that the march was contrary to religious beliefs and that women already had rights in Islam.

Khalil Ur Rehman Qamar, a drama writer and director tweeted (the tweet was later deleted):

Aurat March is name of shamefulness. It is run by Western NGOs who are working against Islam. Agenda of feminists are to manipulate thought of Muslims women in the name of freedom, but we should need to reveal their real faces and people who are behind it #ForeignFundedAuratMarch

Conservative and right-wing organizations are aggressive opponents of the Aurat March feminist collective. Last year's Aurat Azadi March in Islamabad,  was disrupted when participants were pelted by bricks and stones by people at a counter-protest, the “Haya March.” This year, the women's wing of the Jamaat e Islami, a religious political party, organized a march in various cities across Pakistan. Their slogan was Familialism, not Feminism.

Media coverage of the Aurat March is usually limited to showing selective slogans and placards aimed at disparaging the movement. This year the organizers asked the media to register the names of reporters, preferably female, to cover the march. But this did not go well and YouTubers who wanted to cover the event called it as being “against freedom of the press.”

Being a woman & a journo, I disagree with this bar. Movements must let their natural course flow which also includes -ve propaganda against them. Never in history successful movements have put barriers. OTOH, journalists must exercise objectivity not sensationalism to cover #AuratMarch https://t.co/kO7oqKal3B

This (hyper) journalist with Daily Pakistan is threatening a volunteer of Aurat March Karachi. After he was seen asking insulting, controversial questions to the participants, he was politely asked to leave.
His name is Osama and has worked with various media outlets. pic.twitter.com/f8DcsGPkCv