The women's march were held in different Pakistani cities 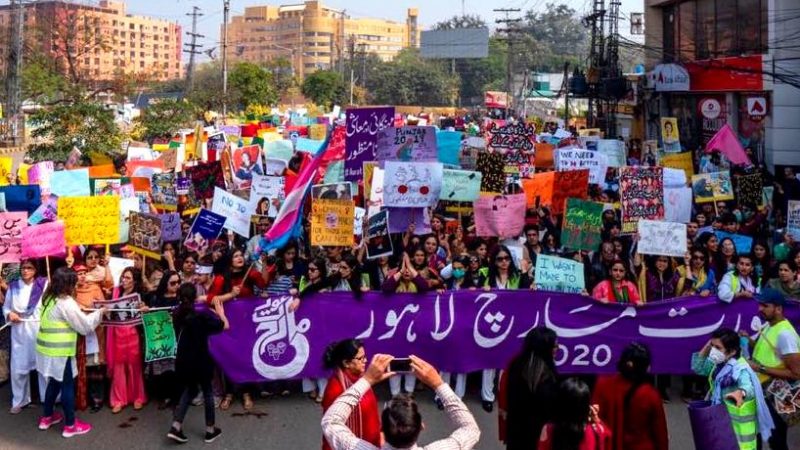 For the third time since 2018, a collective of Pakistani feminist organizations called Hum Aurtein (We are Women) organized the Aurat March (women's march) to mark International Women’s Day on Sunday, March 8, 2020. Despite threats by ultra-conservative religious groups to disrupt the proceedings, marches took place this year in the cities of Lahore, Karachi, Islamabad, Multan, Quetta, Peshawar and Sukkur, albeit under strict security cover.

Several thousands of women, transgender people, children and men turned out to show their support and highlight the plight of women, who in Pakistan are subject to torture and injustice and lack socio-political and economical rights. Participants carried placards with slogans demanding the basic rights they have been denied for so long.

One of the Aurat March organizers, Leena Ghani, tweeted:

I am in awe and still unable to take it all in. Thank you Lahore for making @auratmarchlahore herstorical! This is what happens when womxn come together! You can’t stop us!!
It’s time you join us, as we march into a brave new world! Upwards and onwards! ❤️✊?#AuratMarch2020 pic.twitter.com/cNsfkaCkos

Sahar Tariq shared a picture of her father participating in Islamabad holding a placard reading: “My daughter, her choice”:

Pakistan is a patriarchal society where women are generally not allowed to speak up. For many, the Aurat March is a safe space where they can voice their apprehensions; even the transgender community feels free to share their experiences and demand a decent living.

Today I marched for all the victims of sexual violence and abuse. I stand with you. I remember you.

This shirt is handmade with markers to highlight the age range of the victims. #AuratMarch2020 #AuratMarchLahore pic.twitter.com/WS0uC4yiTr

This year, religious groups went to great lengths to try to disrupt the march and have it banned forever. Petitions were filed in the Lahore, Sindh and Islamabad High Courts seeking an injunction against the march and related activities. None of the petitions was allowed by the respective courts. Maulana Fazl ur Rehman, president of a faction of the Jamiat Ulema-e-Islam (Council of Islamic Scholars), went so far as to threaten to stop the march by force.

I have protested and demonstrated countless times in this city but never have I seen so many people from the city coming out for a cause. The women of Islamabad you were wonderful yesterday. Anyone who wants to continue building & organising. Get in touch! pic.twitter.com/kzKymnRiz8

Syed also reported on an attack on the Islamabad procession by member of a right-wing religious party:

This is how the attacked us. Before this point they were sending “laanat” on us and then made signs of wanting to inflict sexual violence on us. They already had stones & lathis on them! pic.twitter.com/mfQAy4tGEK

Tell us again how Aurat March is a threat to this country. The threat comes from these rabid mullahs who are willing to injure and kill those who stand up peacefully for their rights. The attack on the Aurat March today in Islamabad is an affirmation of that threat. https://t.co/TcAGLyI6U9

Present at the Karachi march was Dua Mangi, a 20-year-old law student who was kidnapped in November 2020. Haris Fatah Soomro, the male friend who was with Mangi at the time of the incident, was shot and wounded, and Mangi was subsequently slut-shamed for having been with a male companion. 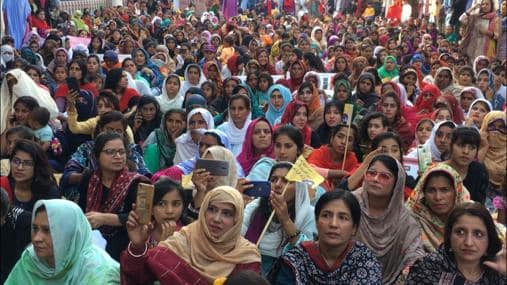 Women in Sukkur organized a gathering a day earlier in defiance of religious parties’ threats, and then held the city's first Aurat March on 8 March.

Sukkur is located in northern Sindh, which is usually heavily influenced by conservative religious communities. Women in this area wear burkas and chaddars to cover themselves. The Aurat March was the first of its kind to be held in Sukkur, where there is a high prevalence of gender-based violence.

Global Voices talked to Arfana Mallah, a professor and activist from Sindh, who said that “religious factions had threatened women of Sukkur, due to which many were not willing to be a part of this gathering. But after assurance from the police and management, women took part in Aurat March. Women in this region have been suppressed and killed in the name of patriarchy for so long that now it's a must that women should come out for their rights.”

Multan, a historic city in Southern Punjab, also held its first Aurat March. Despite being a conservative and religiously-oriented city, a large number of women took part in the march and celebrated the day with zeal, carrying placards to give voice to feelings which have been long ignored. A minor clash occurred when a man addressed participants with abusive language, resulting in an argument that was defused by the law enforcers.

So we were enjoying our march, didn’t abuse anyone, respected and followed all the rules devised by administration of multan but this man had the audacity to come and say that these women are “bayghairat” andhttps://t.co/KAh16OOTNa

To counter the Aurat March, some religious groups organized Haya (Modesty) Rallies in Lahore, Gujranwala, Faisalabad and Islamabad, in order to promote the idea that Islam has already empowered women and brand the Aurat March a foreign-funded activity designed to to malign Pakistan and brainwash women.

One group of people staged a Mard March (Men's March), and tried to enter the venue of the Aurat March carrying banners in support of playwright Khalil ur Rehman Qamar, who in early March had an ugly spat on TV with the well-known feminist analyst Marvi Simid.

Security officers, however, stopped the men from disrupting the gathering. In 2019 there were also plans for a Mard March, but it did not materialize.