Conservatives who oppose the march harassed the marchers publicly 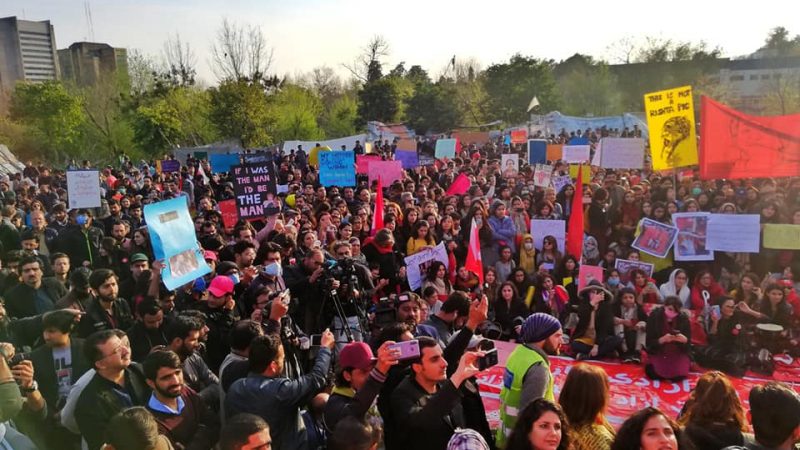 Staged for the first time in Karachi in 2018, the Aurat March (Women's March) in Pakistan on International Women's Day (March 8) has gained in popularity over the last three years. The march is organised in several Pakistani cities by Hum Aurtein (We are Women), a women's collective that highlights the plight of Pakistani women who are subject to torture, injustice and deprived of socio-political and economical rights.

The Aurat Azadi March, or Women's Freedom March (AAM) in Islamabad attracted the largest crowd this year, with over 3,000 supporters marching to raise their collective voice against all forms of patriarchal, capitalist and imperialist oppression in the country. They represented a diverse cross-section of society — from political workers and students to human rights activists and concerned citizens.

The peaceful protest, however, took a hazardous turn when a group of right-wing operatives opposed to the march launched a physical assault on march participants.

The right-wing agitators pelted the marchers with stones, bricks and shoes, beat them with sticks and threw chilli powder into their eyes. The sudden attack caused panic, but AAM volunteers and organisers quickly moved march participants away from the area where police were trying to contain the instigators of the violence.

Look at this video. This is what happened, the stones were thrown at us and people were trying to hold them off from coming to this side so more people can get hurt. The police is witness to this and I’m shocked that this wasn’t mentioned in the FIR. #AuratAzadiMarch2020 pic.twitter.com/UUzlOVFSZf

Some marchers and journalists were seriously injured. A female marcher was repeatedly beaten with a stick, while others shared pictures of bruises on social media.

One of the participants of the march who was hit by stones on their head and neck fell to the ground but the FIR has no mention of this! #AuratAzadiMarch2020
pic.twitter.com/MVzLjKifAo

I was with my kids in march and coming back to my car when a man sprinkled chilli powder on my face. How he brought chilli with him. Did no body check him @dcislamabad @AuratAzadiMarch @Tooba_Sd

This was not the only hurdle faced by the marchers. The procession was also halted by the Islamabad Police, even though all permissions had been acquired. Barriers were erected as the crowd ran for cover from the attacks.

After some debate, the barriers were removed and the marchers proceeded toward D Chowk (Democracy Chowk), a large town square located near the Parliament building, chanting slogans. The march ended with powerful theatre performances, including a short play, and the singing of the Aurat Anthem.

The play was a commentary on the challenges women face both within and outside the home, the harassment they face in both spheres, and how the trans community is treated in Pakistani society. The Aurat Anthem recounted how many different aspects of society and the state are complicit in the sexual violence women face.

To counter the Aurat March, participants from the right-wing groups Jamiat Ulema-e-Islam (F), Sunni Ittihad, and Jamia Hafsa organised their own march called the Haya March (Modesty March). Haya March participants chanted slogans condemning the AAM and spouted hate-filled rhetoric against the organisers, but the event attracted a much smaller crowd than the AAM. The crowd became aggressive, however, as women started marching toward D Chowk, and a tent was torn down by the agitators.

The AAM was also marred by harassers who infiltrated the crowd, and during and after the march numerous complaints were voiced about unsolicited photos being taken and pushing and indecent exposure by men from within the crowd. While some incidents were handled on the spot by security personnel and the ICT police, many went under the radar.

A first information report (FIR) was launched and the police had at the time of writing booked over 400 people, including 11 religious scholars, for violating section 144 (unlawful assembly). The report said that the accused allegedly intervened in the operations of police and misbehaved with officials.

On March 10, AAM organisers held a press conference to discuss the attack. Why were the opposers allowed to preach at a location across the road from the marchers when they are known to be prone to violence? asked members of the panel, which consisted of AAM organiser and President of of the Women's Democratic Front (WDF), Ismat Shahjahan, WFD member Dr. Farzana Bari, and AAM Organisers Tooba Syed and Anam Rathore.

“Were they declaring war against women and children at the march?” asked Tooba Syed during the press conference. “They were using our religion against us. I ask the government and city administration this question. This was in board daylight, they declared war against women, charged and chanted slogans against us. Who is responsible for all of this?”

Calling for an independent judicial inquiry into the attacks, the panel reiterated the demands of AAM, raised the issue of the lack of security provided by the administration and vowed that the struggle would continue.

Later, an AAM organiser told Global Voices that they also questioned Islamabad's Deputy Police Commissioner as to why the pelting of stones and other aspects of the attack were not included in the FIR. The Deputy Commissioner asked them to send him a letter stating their concerns so that an official inquiry could be made on their behalf.

As Mosharraf Zaidi noted in a March 11 op-ed in The News:

The large turnout and relatively safe conduct of the Aurat March is a single-moment. But the real story will be lost in the moment. The real story is the crisis of masculinity that the assertion of basic, fundamental rights has exposed across the spectrum of class, gender and consumption. The real story is the cultural wars that have emerged in an already Digital Pakistan – for which neither the state nor society are prepared.