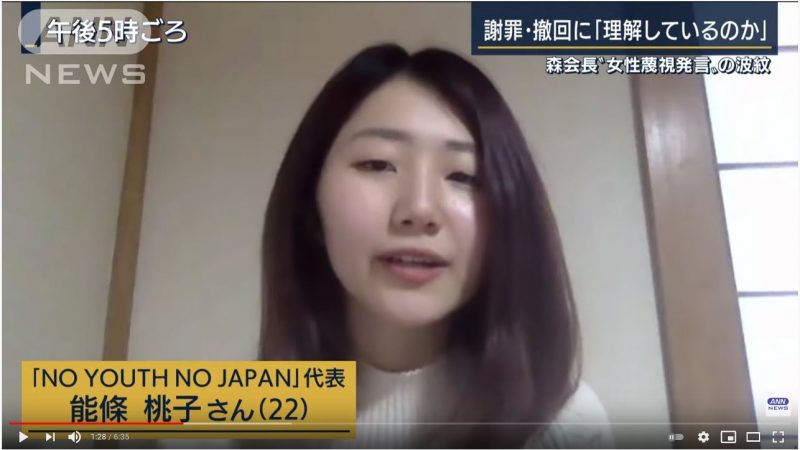 Caption: Nojo Momoko (22) of No Youth No Japan. In an interview on national television, Nojo asked, “Does Japan Olympic Committee chair Mori really understand what the problem is?” Screencap from ANN News official YouTube channel.

Sexist comments made by a former prime minister and current president of the Japan Olympic Organizing Committee drew a strong backlash in Japan and around the world.

Not only did the controversy threaten to torpedo, once and for all, Tokyo's ill-fated summer Olympic games, but it also highlighted the discrimination women still endure in Japan.

During a press conference on February 3, Olympic Committee chair Mori Yoshiro (83) remarked that women “talk too much“:

Meetings of boards of directors with a lot of women take so much time. […] Women have a strong sense of rivalry. If one (female) member raises her hand to speak, all the others feel the need to speak, too.

The off-the-cuff remarks ignited a firestorm. The hashtags #DontBeSilent, #GenderEquality and #男女平等 (also “gender equality”) trended on Twitter, with many people sharing their outrage at Mori's comments.

Several European embassies in Japan included the hashtags as they tweeted pictures of staff raising their hands in protest of Mori's remarks.

Nojo Momoko, the 22-year-old representative of No Youth, No Japan, a group dedicated to encouraging youth to become more active in politics, launched an online petition signed by more than 140,000 people so far in just one week.

We request that Tokyo 2020 Chairman Mori’s recent behavior are properly addressed and steps taken to ensure that similar behavior will not be tolerated in the future.#DontBeSilent #genderequity #男女平等https://t.co/UebUa4GSjm @change_jp

In the face of immediate criticism, Mori first defended his comments by saying he “doesn't speak to women much.” He offered a complete retraction but appeared to resist stepping down from his role as Japan Olympic Committee chair.

These were not Mori's first prominent public comments that were demeaning towards women. Following the recent uproar, the former head of Japan's Rugby Union, a woman, disclosed that Mori had directed sexist remarks to her in 2013.

In 2014, as newly installed head of the Japan Olympic Committee (JOC), Mori criticized Asada Mao, a figure skating superstar beloved in Japan, for failing to complete a triple axel at the 2014 winter Olympics in Sochi, Russia.

During his short term as prime minister in 2000, Mori made so many gaffes — some of them evocative of wartime ultra-nationalist rhetoric — that there is a section of his Wikipedia entry devoted to them.

Mori's government lasted for just one year before he resigned with an 8 percent public approval rating. After retiring in 2012, Mori would eventually be named “supreme advisor” of the Japan Sports Association. A former rugby player, Mori was chosen to lead the Japan Olympic Committee (JOC) in 2014.

Under Mori's leadership, the JOC seems to be in no danger of being forced to listen to women. Of the 25 JOC board members, just five are women. This is despite a JOC policy target, based on a governance code for sports organizations, that at least 40 percent of its directors should be women.

In fact, Mori appears unaware of how many women actually sat on the JOC board:

JOC chair Mori’s sexist comments get even worse. Asahi: he also said “the current 7 female JOC members know their place.” (There are only 5; he can’t even count women correctly.) The other JOC members laughed right along with him. Is this kind of Olympics we want, @iocmedia? pic.twitter.com/erypDk1nCw

While Mori's remarks have been characterized as an “obsolete patriarchal leadership style,” the support for Mori by men in prominent leadership positions suggests that sexist, anti-women attitudes are in fact quite normal and are the main reason why Japan is so commonly referred to as an “underdeveloped country for women.”

Powerful men closed ranks to protect Mori from criticism. For example, Prime Minister Suga Yoshihide (72) initially declined to comment, claiming he was unfamiliar with Mori's remarks. But as the backlash continued to mount, the prime minister admitted that Mori's comments were “not desirable for (Japan's) national interests,” while stopping short of asking the JOC chair to resign.

Mori also received support from many other notable Japanese men, including influential politician Nikai Toshihiro (81), and Nakanishi Hiroaki (74), who serves as the chair of both the giant conglomerate Hitachi, and the industry lobby group Japan Business Federation (Keidenran).

Nakanishi implied that the reaction to Mori's remarks was an example of “cancel culture”:

Keidanren Nakanishi: “Honestly speaking, I feel that in Japanese society, a lot of ppl understand Mori's remarks deep down in their heart.

If you are honest enough to put it into words, you get ganged up on on the Net. I feel a bit frightened.”https://t.co/Xtdcj6b2q8

Observers pointed out that Mori made his misogynistic comments in the presence of senior Japan Olympic Committee officials, who chuckled in response.

[top] From the New York Times…

[bottom] This (above tweet) is how the Times should have reported the story.

It was revealed that Mori offered to resign because of his remarks, but the JOC instead insulated him from criticism, fearing his resignation would imperil the Games. The International Olympic Commission (IOC) also at first refused to criticize Mori for his remarks.

As nearly 400 Olympic volunteers and two torch bearers quit in protest, a former Olympic athlete pointed out that Mori's comments  may have violated the IOC's code of ethics:

President Mori appears to have not read, or understood, this clause…

Time for the IOC to step in https://t.co/NSPhiEayWL

The comments also exposed the unpopularity of the Tokyo Summer Olympics, which had already been postponed from 2020 to 2021. A survey conducted on February 6, three days after Mori's remarks, found that only 14.5 percent of Japanese people say the Olympics should be held as planned.

As the Japanese government spends 15 billion USD on games that still have no clear COVID-19 mitigation strategies, an increasingly impoverished class of gig workers in Japan struggles to survive. Job cuts in Japan during the COVID-19 pandemic have also disproportionality affected women.

Even women who enjoy prestigious and seemingly powerful careers may be at a disadvantage in Japan.

Mari Miura, a professor at Sophia University's Faculty of Law who specializes in gender and political science, notes that the women Mori disparaged as “talking too much” are likely purposefully excluded from the decision-making process:

Mori thinks that in comparison to men, who know when not to speak, women are more likely to engage in discussion in formal meetings. […] However, the real discussions are held at meetings [among men] behind the scenes such as at dinners. [In formal meetings], men then agree [without discussion] what has already been officially decided.

Entrenched sexism also dissuades younger women from speaking out. Aradhna Krishna, a well-known marketing innovator who is professor at the Ross School of Business, laments that Mori's remarks, and the tacit acceptance by men in power, are an example of why women's voices are often absent:

As profs., we try to have women speak up more in class. Why are many so quiet? The sentiments of Tokyo’s olympics chief provide one expln. He announced that women talk too much and that their speaking time should be limited. Methinks HE needs a Gag-order. https://t.co/7kH5V4x2Yt