Armenia plunges into crisis after deal ends fighting in Karabakh

Some in Armenia see the peace deal as a humiliation 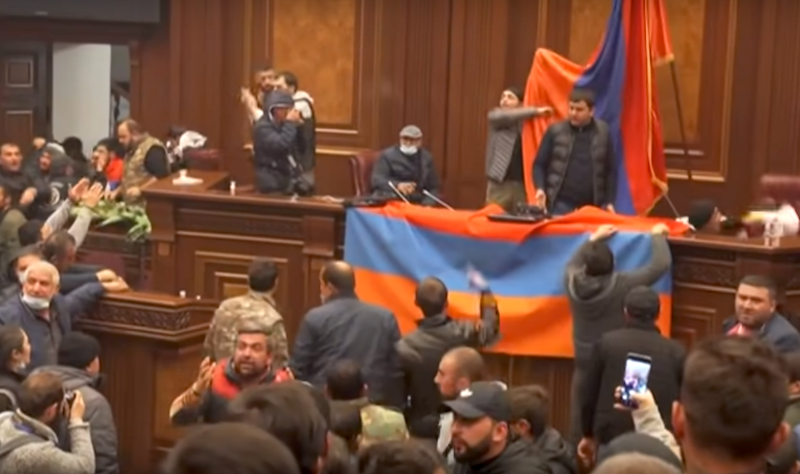 Armenia and Azerbaijan have agreed to cease hostilities, putting an end to fighting in Nagorno-Karabakh.

“I took a very difficult decision for myself and for us all”, stated Armenia's Prime Minister Nikol Pashinyan in a Facebook livestream in the early hours of November 10. “I took this decision as a result of a deep analysis of the military situation and assessments by people who know it best”.

This war has gone badly for Armenia. It has reversed most if not all of the gains of the first Karabakh War, fought against the backdrop of the collapse of the Soviet Union. By 1994, that war left Karabakh itself, as well as several surrounding regions of Azerbaijan, under the control of the ethnic Armenian population as a de-facto state known as the Republic of Artsakh. Hundreds of thousands of ethnic Azerbaijanis and Kurds fled or were expelled into territory controlled by the Azerbaijani government.

The war which erupted on September 27 was Baku's latest bid at reconquering Karabakh, and the most serious fighting since the 1994 ceasefire. An Azerbaijani armoured offensive first took swathes of low-lying territory along the border with Iran, before turning north to more mountainous territory in the heart of Nagorno-Karabakh. By early November, Azerbaijani soldiers were close severing the Karabakh's only remaining road link with its Armenian allies via the town of Lachin — a road which thousands of civilians have used to flee Nagorno-Karabakh as its cities came under intense bombardment from the Azerbaijani military.

Nowhere was this more pronounced than in Stepanakert, the capital of Nagorno-Karabakh. Accordingly, a turning point in the war came when Azerbaijani forces looked poised to capture Shusha, an imposing hilltop city which overlooks Stepanakert. On November 9, Azerbaijan's Ministry of Defence released a video showing Azerbaijani soldiers outside the mayoralty building in Shusha. Meanwhile Azerbaijanis, particularly those displaced from the city, celebrated in the streets of Baku.

These developments prompted de-facto President of Artsakh Arayik Harutyunuyan to support Pashinyan in a public statement on November 10. The peace deal, he stated, was a necessary evil given the parlous state of the Armenian armed forces in Karabakh and the likelihood that an agreement later on would be even less favourable.

The deal brokered by Russia essentially amounts to a capitulation, demanding the withdrawal of Armenian forces from regions surrounding Nagorno-Karabakh in three stages until December 2020. Importantly, 2,000 Russian soldiers are to be deployed to the region, along the road connecting Armenia to Nagorno-Karabakh, and in those three districts of Nagorno-Karabakh which remain under Armenian control. The status of those Armenian-controlled territories is not addressed in the text of the deal, and will presumably be established in future negotiations. Furthermore, Azerbaijan will also be guaranteed use of roads across southern Armenia, offering a land connection to its exclave of Nakhchivan.

Quick map of what parts of #Artsakh/#Karabakh Armenians keep (yellow), what's already militarily seized & kept by Azerbaijan (green/blue) and the rest, which is surrendered to Azerbaijan; terms also include returning the Armenian-occupied Qazakh enclaves and a route to Nakhchivan pic.twitter.com/qRmwaZTLwH

Russian peacekeepers are already on their way to Nagorno-Karabakh. Their formal presence in the territory is now being seen as an important sign of redoubled Russian influence in the South Caucasus — an influence which Armenians may come to resent after Russia, which is formally their military ally under the CSTO, did not provide the military aid as they had hoped. Turkey's enthusiastic support for Azerbaijan's war effort has also entrenched Ankara as an actor in the region, with multiple sources suggesting that the presence of Turkish peacekeepers would be regulated in a separate document with Azerbaijan.

But for many in Armenia, the deal is seen as an utter humiliation.

Not long after it was announced, thousands of people flocked to Republic Square in the capital Yerevan and broke into government buildings. The crowd soon entered the parliament building and, in a search for Pashinyan, briefly entered the prime minister's residence. The Speaker of Parliament Ararat Mirzoyan, a key ally of Pashinyan, was dragged from his car and severely beaten.

Some of the prime minister's colleagues appear to be distancing themselves from Pashinyan. Armen Sarkissian, the President of Armenia, claimed in an official statement this morning that he had not been aware of the deal until he had learnt about it from the media.

Pashinyan has tried to strike a tone of contrition in recent Facebook livestreams — his favourite mode of communication with ordinary citizens. However, Armenian society appears deeply divided. On Armenian-language social media networks, the word ամոթ (“shame” in Armenian) can be seen beside his name. But so, too, can #IStandWithNikol from supporters.

A common refrain on Armenian social media is now one of betrayal — that as government spokespeople cried Հաղթելու ենք (“We will be victorious”), the situation on the frontline was far less rosy than they were prepared to admit.

So while Armenia's opposition rallied behind the flag during the conflict in Karabakh, they now appear to be mobilising against the government. On November 9, some 17 opposition parties released a statement demanding Pashinyan's resignation as prime minister. All of these parties are extra-parliamentary with one important exception: Prosperous Armenia (PAP), led by the influential oligarch Gagik Tsarukyan. The PAP was one of only two opposition parties to enter parliament in the 2018 elections, alongside Bright Armenia. Although the latter did not sign the November 9 statement, several of its lawmakers have also called for Pashinyan's resignation.

Several of these parties represent the former elite which was overthrown in Armenia's 2018 Velvet Revolution, which swept Pashinyan to power on a mandate of tackling corruption and impunity. But Pashinyan's vigour in pursuing that goal surprised and delighted many — particularly when anti-corruption probes targeted oligarchs such as Tsarukyan and an investigation into the violent suppression of protests in 2008 led to the detention of former President Robert Kocharyan. But these moves also earnt Pashinyan powerful domestic enemies. Furthermore, they fuelled the enduring perception that Moscow was perturbed by the prospect of Pashinyan's success in cleaning house — and may have been less eager to come to his aid on the frontline.

With fears of opposition schemes afoot, observers of Armenian politics such as the sociologist Dr. Artyom Tonoyan now wonder whether a new struggle will begin for the legacy of the Velvet Revolution:

Whatever else may happen, one thing is for damn sure red lights flashing on Armenia's experiment with democracy. It is in peril and may not survive this. I hope I am wrong. I pray I am wrong.

Although many in Armenia are deeply dismayed by the deal, they appear equally dismissive of those who seized government buildings last night. In the opinion of Samson Martirosyan, a journalist for the independent website Hetq, they represent a disgraced old guard:

As I understand it, at the beginning those on [Republic Square] were earnestly expressing their pain and sorrow. But the vandalism was committed by the disgraceful hangers-on of Prosperous Armenia, the Republicans [former ruling party], the Dashnaktsutyun, and Kocharyan. Most people were actually silent last night, mourning the victims.

Several thousand civilians and soldiers have been killed in what has become known as the Second Nagorno-Karabakh War. Whatever their reservations, Armenians who have lost friends and family in the conflict will be relieved with an end to the bloodshed.

But the absence of war is not a lasting peace. Over the past three decades, the conflict over Nagorno-Karabakh has made and broken leaders in Armenia and Azerbaijan, whatever their political allegiances or the political systems which constrain them. Will Pashinyan be next?