If mass strikes spread, they could increase pressure on the authorities 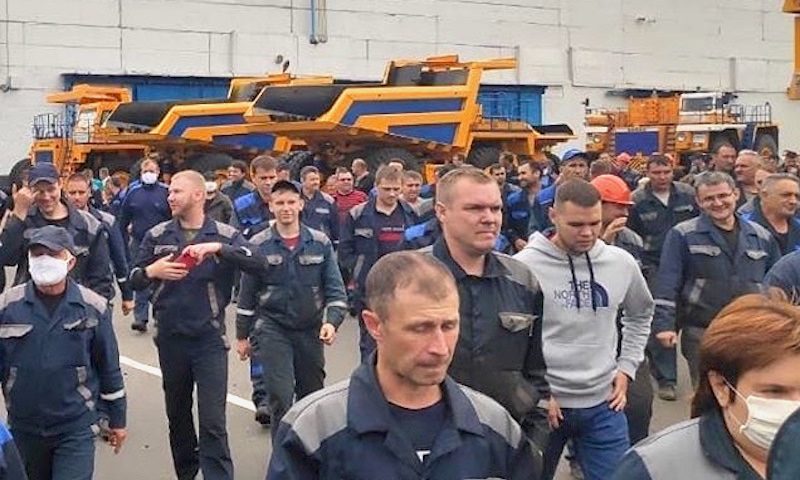 Workers stage a strike at the BelAz plant in Belarus, August 13, 2020. Photo by bnpunion / Instagram.

Taking to the streets in Belarus today is a brave thing to do. Riot police have used extreme violence against citizens, detaining over 6,000. Those citizens are protesting an attempt by longtime President Alexander Lukashenka, who has ruled the country since 1994, to remain in power for a sixth term after a dubious presidential election on August 9. They refuse to accept that Lukashenka received, as official figures have it, 80 percent of the vote compared to just nine percent for his challenger Svetlana Tsikhanouskaya, who has since fled to neighbouring Lithuania. At least two people have died; the detention centres are full, and there are credible accusations of torture and mistreatment.

Joining a picket line is also a brave thing to do in Belarus, which has strict laws constraining industrial action. The country essentially has “no guarantee of labour rights,” noted the International Trade Union Confederation (ITUC) in a recent statement on the turmoil. But Belarusian workers are not deterred; the first unrest began on August 10 at the immense metallurgical works in the town of Zhlobin. That same day, a call went out on the Мая краiна Беларусь (“My country Belarus”) Telegram channel, urging workers to demand that their bosses support a call for new elections and an end to police violence.

Over the days since, these have escalated across the country, and a variety of industries. In the capital of Minsk, trolleybus drivers went on strike in protest at the detention of one of their colleagues at a protest. Workers at a sugar factory in Zhabinka have gone on strike, as have engineers at the Minsk tractor factory.

The authorities have not stood idle. Police vans and paddy wagons have been seen outside several premises. Arrests followed. On August 11, Nikolai Zimin, the former president of Belarus's mining and chemical workers’ union, and Maxim Sereda, chairman of the Independent Miners’ Trade Union, were sentenced to several days’ imprisonment at a court in Soligorsk, where miners have been striking. In recent days, Lukashenka has dismissed protesters as “sheep” and as provocateurs in the pay of foreign powers. In a meeting on August 10, he described them as “criminals” and unemployed:

The [social] base of all these so-called protesters is people with a criminal past or those who are now unemployed. No work? OK, “let's go for a jaunt down the streets and avenues.” That's why I ask and warn, in good faith: if you don't work, you have to go and find work.

But it seems that many workers see things very differently. Although Belarus’ officially sanctioned trade unions are largely subordinate to the interests of the authorities, the country does have an independent trade union movement, represented by the Belarusian Congress of Democratic Trade Unions (BKDP). This movement has survived repression and intimidation and still has a presence in some workplaces. Its executive committee issued a full-throated statement on August 12 with a very clear position:

The Belarusian people have not recognised Lukashenka as the legitimately elected president, and mass protests have broken out across the country. The ruling regime which has so viciously seized power, shocking the whole world, has launched reprisals against participants of peaceful protests. The unprecedented brutality of the security services has led to casualties.

We demand the immediate cessation of repressions, violence, and murders of the citizens of this country, the swift release of all those illegally detained, the closure of all criminal cases connected with participation in mass protests, and the release of all political prisoners.

The strikes now underway in the country show the growing political activity of working people. This regime, illegally clinging onto power, is leading this country towards economic collapse: Towards the bankruptcy and closure of businesses, the loss of jobs, and the impoverishment of the people.

This same letter did not call on workers to strike, explaining that doing so would pose a real risk of mass layoffs. However, it is also fair to say that the logic of this labour activism is somewhat different from traditional strikes in the narrowest sense of the concept: Workers are demanding that their managers, in the name of their places of work, formally denounce Lukashenka and his government.

This act has potent political significance in a country like Belarus, which has one of the highest rates of public sector employment in the world. Unlike Russia, Belarus did not undergo “shock doctrine” privatisation of the 1990s, leaving many key industries in state ownership. This won Lukashenka some plaudits for comparative social stability, even as he constructed a rigidly authoritarian state. Yet that offering began to wane in recent years, which saw moves to reduce some social welfare and even levy a tax on the unemployed, which inflamed a wave of protests. Tadeusz Giczan, a Ph.D. researcher on Belarus at University College London, told Global Voices that working people had largely started to lose their faith in this once-powerful social contract:

Lukashenko lost the support of the “ordinary people” after his 2017 tax against “social parasites”. But most importantly, the economy hasn't been growing since 2010 and there are no government plans to change that. The discontent has been growing for quite some time and erupted right now due to a number of indirect reasons, such as the mishandling of the COVID-19 crisis and the emergence of strong opposition leaders.

Unlike Ukraine, such large factories and workplaces are generally not in the hands of powerful oligarchs able to jockey independently for political power. Instead, appointed managers are accountable to the state above — and now to their employees below. Here is an example of the kind of petition they are facing, circulated by workers of the Belkard metalworking plant in the western city of Hrodna:

Right now, around 200 workers of Belkard JSC, the large producer of components for cars, have gone onto company premises to demand that the directors appeal to the local authorities and the Ministry of the Interior to demand that an end to brutality and the use of force, as well as baseless detentions of people at the hands of the security services and police.

Furthermore, workers of Belkard demand that all detained citizens be freed and that the general prosecutor conduct an assessment into the accuracy of the tallying of votes in every electoral district in Hrodna.

As far as can be judged from media reports, demands like these are now being voiced in the country's largest enterprises, state-owned and private alike. Employees of the Azot Chemical Plant in Hrodna have circulated a similar letter, supported by the country's independent trade union. A potential game-changer is the strike at BelAz, one of the country's largest and best-known enterprises which produces heavy industrial vehicles. The company has around 970 million euros in yearly revenue and clients throughout the world.

Videos now circulate on social media showing tense meetings between workers and their bosses. The former make their loyalties clear:

This activism does not stop with industrial workers. One of the most vivid videos of recent days has shown members of the Belarus National Philharmonic, singing while holding placards which read “my voice has been stolen”:

As the situation in Belarus deteriorates, many observers now fear that Lukashenka has alienated any section of the opposition which could have once been prepared to negotiate with him. Thus petitions to the authorities from managers could be one of the few channels of dialogue left, argues Volodia Artiukh, a researcher from Ukraine who specialises in labour relations in Belarus who recently wrote on the social composition of the protests for openDemocracy:

What I wrote about organised labour as the only agent capable of articulating and pressing clear demands and forcing the authorities to listen, can be illustrated with a video from a meeting of BelAZ plant workers with the mayor of their city that happened today afternoon. Several hundred workers gathered at the plant gate and met with their director and the mayor of Zhodin, who promptly arrived. The conversation was heated but respectful. The mayor looked confused and timid. Workers demanded release of their colleagues and relatives from jails, expulsion of special police force from their city (“Why do we need wages if we are beaten up?”), recounting of votes. They insist their city is safe, they control the situation. The mayor couldn't make any clear promises, of course, but he agreed to meet with the workers outside of the factory in the evening to discuss their demands. He was cheered with “Thank you!” and “Mayor with the people” chants. The plant never stopped, but after watching the video I am less skeptical about the possibility of a real protracted strike with walkouts. So far this is the only channel through which the protesters can force the authorities into a sort of a dialogue on a local level. If the central authorities cut it, worse for them.

In a conversation with Global Voices, Artiukh cautioned against overestimating the scale of these strikes, but stressed that they were quite unprecedented and brave moves in the Belarusian context. Indeed, due to the internet block in Belarus during the election and protests, it has been hard to establish the scale of these workplace protests. As the country goes back online, the real scale has become more visible — and it is significant. If striking workers are able to benefit from the national strike fund announced on August 13, their numbers could grow larger still.

Meanwhile, the number of businesses and enterprises whose workers are declaring solidarity with the opposition continues to grow. On the evening of August 13, workers at MGTS (the Minsk municipal telecommunications network) announced a strike.

Belarusian workplaces are as much a site of struggle as the country's streets and squares — in fact, they may be just as crucial in coming days.