Did participation drop after institution of new public assembly law? 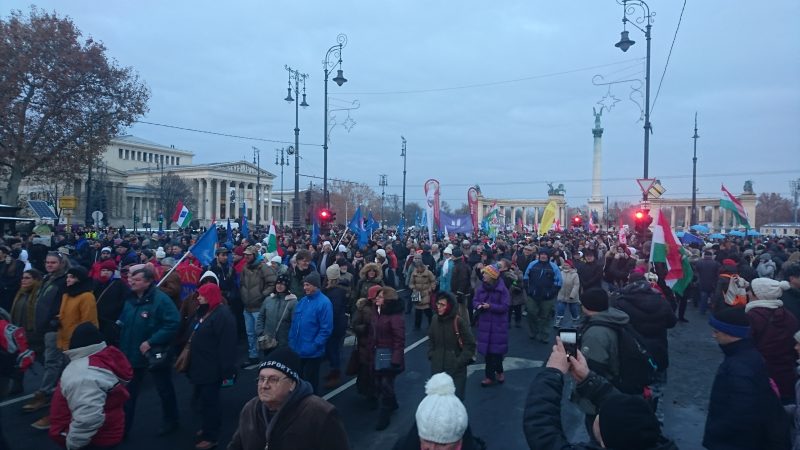 A protest against so-called “slavery law” in Budapest, Hungary on December 16, 2018. Photo by Atlatszo.hu/Áronl Halász, CC BY-NC-SA 2.5. Click on image for full album.

This story was first published by the Hungarian investigative journalism non-profit, Atlatszo. An edited version is republished here as part of a content-sharing agreement with Global Voices.

Even though more public demonstrations and rallies took place in Hungary in 2019, there's been a drop in participation.

If you want to stage a protest in Hungary, you must first notify the police as to its time and location. Drawing on these archived notifications, the national headquarters of the Hungarian police service furnished the human rights NGO Hungarian Civil Liberties Union (HCLU) with data showing the trend of decreased attendance.

Atlatszo independently identified these trends by comparing similar data sets from 2015 to 2018 — which the organization had used in previous analyses — in order to gain insight into whether participation dropped after the country's new law governing public assembly came into force on October 1, 2018.

Prior to its adoption, human rights defenders demanded that the law be withdrawn because they found its scope — such as the ability to limit freedom of assembly — repressive. Eva S. Balogh, history professor and editor of the blog Hungarian Spectrum, warned that “the rules are written in such a way that the police will find it easy to ban any demonstration.”

The new law brought about two changes affecting the outcome of the data analysis. Firstly, because the old law did not require prior notification to police for political rallies, the data sets obtained through Freedom of Information (FOI) requests by 2018 didn't contain information on events from the national election campaign period in April 2018. After the adoption of the new law, the number of events that were covered increased, because it also contained data on election rallies from campaigns for the European parliament, as well as local elections that took place in May and September of 2019.

Secondly, people could no longer notify the police about an upcoming public gathering via email; they now had to submit a more complicated online form, located on the police website.

The two graphs below show the data for 5,957 public gatherings to which the police were alerted; they took place between November 2015 and October 2019, and had a total of 2,077,621 expected attendees. The first graph shows a remarkable increase in the number of events after the new law took effect, with higher density of events per period, while the second graph shows a decrease in the number of participants.

The analysis noted that several events with extremely high numbers of participants — such as the 200,000-strong Peace March (Békemenet) and the I Would Like to Teach Movement (Tanítanék Mozgalom), which expected a turnout of 50,000 — acted as outliers, resulting in spikes of over 200,000 in March of 2019.

Pruning the outlier data and using median (the value in the middle of a sequence of numbers) for the rest, provided a realistic picture of the average attendance in all the other types of protests, which turned out to be quite small. The median number of such participants in Budapest was 50; in the county capitals it was 30, and in other towns, 20.

The data shows that while the number of announced protests around these themes hasn’t decreased dramatically, the expected number of participants diminished in 2019. With some exemptions — like the series of protests against the so-called “slavery law” in January 2019, or the demonstrations demanding that Hungary joined the European Public Prosecutor's Office — pressing issues like education, health care, poverty and freedom of the press, though extensively covered by local and international media, failed to channel into large anti-government protests in 2019.

One possible explanation is that dissatisfied people “protested by their votes” in the municipal elections held in October 2019. The election results brought surprising gains for the opposition, including wrestling political control of the capital, Budapest, away from the right-wing, populist party Fidesz, led by Prime Minister Viktor Orban.

Unsurprisingly, the data showed that most of the demonstrations were held in Budapest, as well as in bigger cities that serve as county capitals. In the past four years, 43 percent of the protests were held in Budapest, which 76 percent of participants attended. Any protests that expected a turnout of 5,000 or more took place in Budapest. The largest demonstration outside the capital, ranked at 104 in the overall list, was in Szeged, Hungary's third-largest city.

Built around the police data, this dynamic map shows the density of demonstrations across Hungary, indicating entire regions with no demonstrations at all in the past four years. This may partly be due to the low density of the settlements, especially in the rural Western regions.

First, while the new law made it more difficult to organize assemblies, we can see that their number has increased. One plausible explanation for the decreasing number of attendees can be the more rigorous regulations. The police require more organizers and security guards for large protests, and that’s why the organizers estimate smaller turnouts. We only have data for the past four years at the moment, so can’t see the trends for longer periods.

The number of participants is not just a question of the [new law]; it can be a mirror of social and political circumstances. With the aim of promoting the right of assembly, the Hungarian Civil Liberties Union created the site tiltakozz.hu, where everyone can access information on the regulatory framework affecting public assembly and how to organise gatherings.