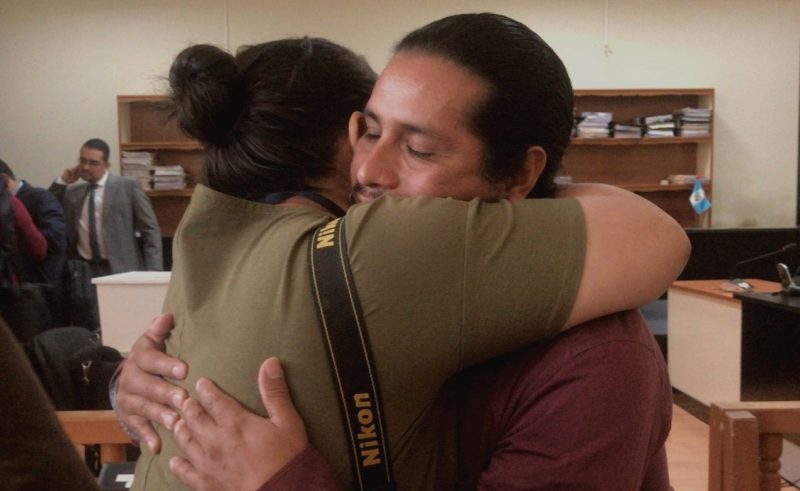 Court of Major Risk “B” released Francisco Lucas Pedro who was detained since December 21, 2019. Photo by Nanci Sinto. Used with permission.

A court in Guatemala City released indigenous journalist and activist Francisco Lucas Pedro on January 3 after he spent 13 days in detention since his arrest in the northeastern department of Huehuetenango. According to the police, he is accused of terrorism and arson, but human rights groups say the arrest was illegal.

Back in 2012, a criminal court had issued an arrest warrant against Lucas based on a complaint made by World Bank-funded Ecoener Hidralia Energía. This is the Spanish firm behind Hidro Santa Cruz, the company that wanted to build a controversial water dam on the Q'am B'alam river, considered sacred by the Q'anjob'al people.

Lucas was an active participant in the civic movement against the dam, whose construction the company eventually canceled following eight years of protests, court battles, and international pressure. Ecoener Hidralia Energía left Guatemala in 2016.

When he was freed, Lucas told reporters that the arrest affected his physical and mental health.

In total, 21 land defenders had been charged in the Hidro Santa Cruz case. Two of these people, Saúl Méndez and Rogelio Velásquez, were sentenced to 33 years in prison for conspiring to commit murder in 2014. They were released in 2016 after winning an appeal. In this case, the appeals judges wrote that “we cannot allow for, nor support a negligent, ineffective and inefficient investigation, one that is based on unsubstantiated evidence…[The Public Prosecutor] was unable to obtain any kind of evidence that attributed the actions to the accused,” according to excerpts reported by Centro de Medios Independientes de Guatemala (CMI Guatemala).

Better known by his Mayan name, Palas Luin, Lucas is a member of the Winaq indigenous political movement, is an expert accountant and works for the local outlet Prensa Comunitaria. At the time of the arrest, he was reporting on the trial of two Hidro Santa Cruz plant workers who are accused of murdering a local community member and injuring two others in 2012, according to Prensa Comunitaria. 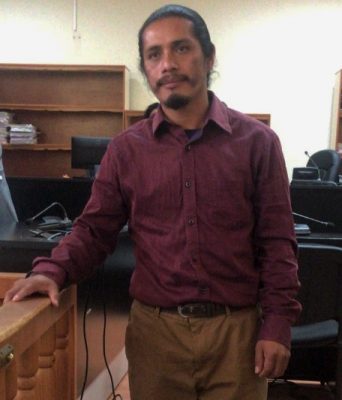 Court of Major Risk “B” released Francisco Lucas Pedro who was detained since December 21, 2019. Photo by Nanci Sinto. Used with permission.

The UN Special Rapporteur on the situation of human rights defenders, Michel Forst, believes Lucas was another victim in a string of recent judicial cases against environmental defenders in the Central American country.

Between 2017 and 2019, 106 human rights leaders, and in particular indigenous people, were unjustly detained, according to OACNUDH and the Guatemalan Office of Human Rights. According to these institutions, the victims are “criminalized”, which means that “criminal law is misused” against them, as mentioned in their December 2019 report.

According to Global Witness, “Guatemala was the deadliest nation for land defenders per head of population with 16 confirmed killings” in 2018, as reported by France24. Guatemala saw a sharp rise in attacks against land defenders that year, too.

OACNUDH and the Office for Human Rights also mention in the report that the “attacks against defenders have negative impacts at various levels, including the individual, family and collective/community spheres (especially in the case of indigenous peoples), and generate, as a result, silencing and paralyzing effects in their work.”

Guatemalan society is polarized on issues such as those. When OACNUDH tweeted its support to Lucas, people replied skeptically to his innocence.

For example, Twitter users Hugo Castañeda and Luisa Ferreiro replied, respectively, that “any crime is allowed if you call yourself a human rights defender…” and “it's amazing how they support the guerrillas, how disgusting.”

Others, using the hashtag “#ChicoLibre”, showed support for Lucas. Victorino Tejaxún, for example, tweeted his belief that Mr. Lucas was unjustly criminalized.

Francisco Lucas Libre! The malicious use of criminal law to criminalize human rights defenders is once again evident. #ChicoLibre

I add my voice to denounce the criminalization of Francisco Lucas, defender of the Q'anjob'al Mayan People. He joins the long list of human rights defenders who have been criminalized in Guatemala. #ChicoLibre

For Nansi Rodriguez, a contributor covering Guatemala for the weekly newsletter Central American News, the arrest was devastating. Every week, she relies on Prensa Comunitaria –which describes itself as doing “community, feminist and autonomous journalism” – as a valuable and irreplaceable source of news.

Prensa Libre, one of the largest newspapers in Guatemala, did not report on the arrest.

Editor's note: Melissa Vida, the author of this story, is the editor of the weekly newsletter Central American News.