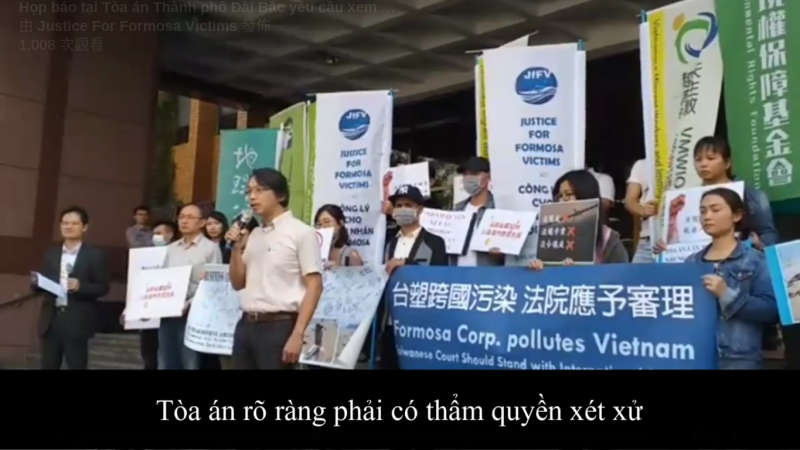 Screenshot from a video on civic coalition press conference outside Taipei district court on October 24, 2019. Via Justice for Formosa Victims.

This post was written in collaboration with members of the Global Voices Chinese Lingua team.

On 14 October 2019 the Taipei District Court dismissed a lawsuit filed by nearly 8,000 Vietnamese fishermen against Taiwan-based Formosa Plastics Group (FPG) over a 2016 marine disaster in Vietnam. The court said that it had no jurisdiction to rule on the case, but the plaintiff's lawyers filed an appeal on October 24.

The marine disaster, which took place on 6 April 2016, is seen as the most serious environmental disaster in Vietnamese history. The incident, caused by the discharge of toxic waste into the sea by FPG subsidiary Ha Tinh Steel Corporation, led to the death of massive amounts of fish and marine life in central Vietnam.

The fishing industry in the affected areas has declined dramatically after the marine disaster and it estimated that complete recovery would take about a decade.

FPG accepted responsibility for the disaster on 30 June 2016 and agreed to give US$500 million in compensation to the Vietnamese government for disaster relief work. Yet, the Vietnamese government mainly gave compensation to those who live in Ha Tinh. Those who live in other parts of central Vietnam, such as Quang Binh, Nghe An, and Quang Tri, have not received any money. 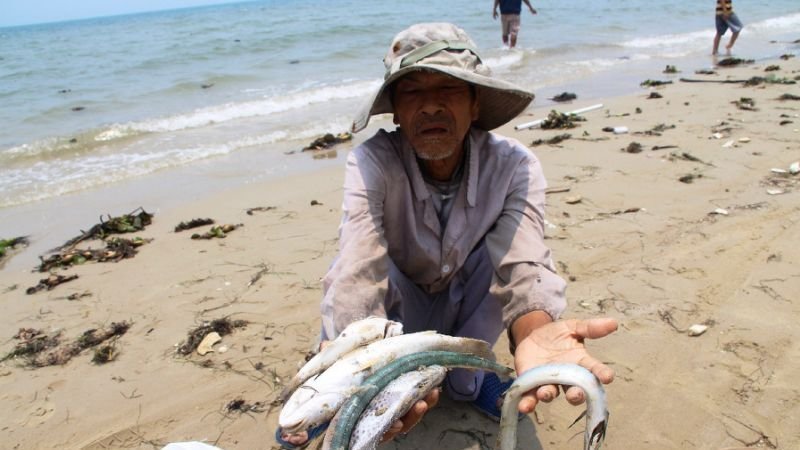 With the assistance of environmental and human rights organizations in Taiwan and Vietnam, lawyers in Taiwan were able to represent 7,875 Vietnamese plaintiffs and present the lawsuit against FPG at the Taipei district court on 11 June 2019, demanding US$4 million dollars in compensation for the first group of 51 plaintiffs.

Although the Taipei District Court had accepted NT$1.2 million (US$39,234) in payment for the case on June 13, four months later, it rejected the case on the grounds that the suit does not fall within its jurisdiction.

Both human rights and environmental lawyers expressed their disappointment with the ruling outside the Taipei district court on October 24 and vowed to bring the jurisdiction rule to the High Court. In a statement released by the Taiwan Association for Human Rights, the organization pointed out that the case should not be confined within an exclusive jurisdiction as the Taiwan-based defendant, FPG, is the key investor and stakeholder of its subsidiary Ha Tinh Steel Corporation in Vietnam.

Hsin-Wen Huang, one of the lawyers, pointed out that although the marine disaster took place in Vietnam, the Taiwanese court should take into consideration the human rights aspect of the case:

The fact that the court has completely neglected the violent crackdown, unjust arrest and imprisonment of the victims of the disaster and concluded that the case falls into Vietnam's jurisdiction is against the very principle of fairness.

In fact, more than 500 victims of the marine disaster had attempted to file the case in the Vietnamese courts in October 2016 but were rejected on the grounds that the plaintiffs had failed to prove their factual damages. When the victims started to present factual evidence of the damages, they were physically attacked by government-sponsored thugs, arrested and received heavy sentences for anti-state and etc. Vietnamese government's violation of civil rights and freedom has been condemned by the UN, including the HRC and the OHCHR, and documented by a range of independent NGOs. The marine disaster and human rights violations between April 2016 to October 2017 was well documented by Vietnamese independent media outlet, The Vietnamese:

…the marine life disaster involved a humane and political crisis when the Vietnamese government fails to ensure relevant compensation for the victims; they even go further by brutally suppressing voices of dissent. Widespread human rights violations have made 2016 and 2017 dark years for democracy and freedom in Vietnam, characterized by arbitrary detentions, police violence targeted at civilians, and increasing imprisonment of peaceful activists.

Since October 2016 [till October 2017], dozens of activists have been arrested and faced charges related to their activities to protest at Formosa and demand environmental rights.

Huang also pointed out that the defendant, FPG, should be responsible for the disaster:

Aside from Japan Steel, Ha Tinh Steel Corporation in Vietnam was jointly invested by FPG, Formosa Chemicals, TASCO Group – majority are Taiwanese corporations. And FPG is the biggest share holder who established the Vietnamese subsidiary in the first place. FPG is well-known for its centralized decision making style, all investments were reviewed and approved by its administrative core. The construction contract, management and environmental protection policy of Ha Tinh Steel Corporation were coordinated by FPG. Hence related evidence could be obtained in Taiwan. Taiwan should have jurisdiction in the case…

The FPG has a long history of pollution wrongdoing, both within Taiwan and outside of Taiwan. In recent years, FPG and its international subsidiaries have faced major fines and lawsuits in the United States, notably in Texas, Louisiana, and Mississippi after discharging poisonous chemicals into the land and underground water sources.

After the Taipei District Court ruled the lack of jurisdiction, the International Federation for Human Rights (FIDH) passed an urgent resolution and called on the Taiwanese court to reconsider:

…reconsider the Formosa case and hear the litigation to provide better protection for the interests of the plaintiffs, who are vulnerable, and ensure a practice that is more in line with the protection of human rights under international law. Asserting jurisdiction in this litigation by the court in Taiwan will achieve equity between the parties, fulfil the need for a just and impartial judgment, and ensure the speediness of the proceedings and the idea of litigation economics.

Justice for Formosa Victims (JFFV) also started an online petition to ask the Taiwanese court to proceed with this lawsuit. There have been more than 2300 people who have signed this petition.

The lawsuit is now pending for a High Court ruling over jurisdiction controversy.