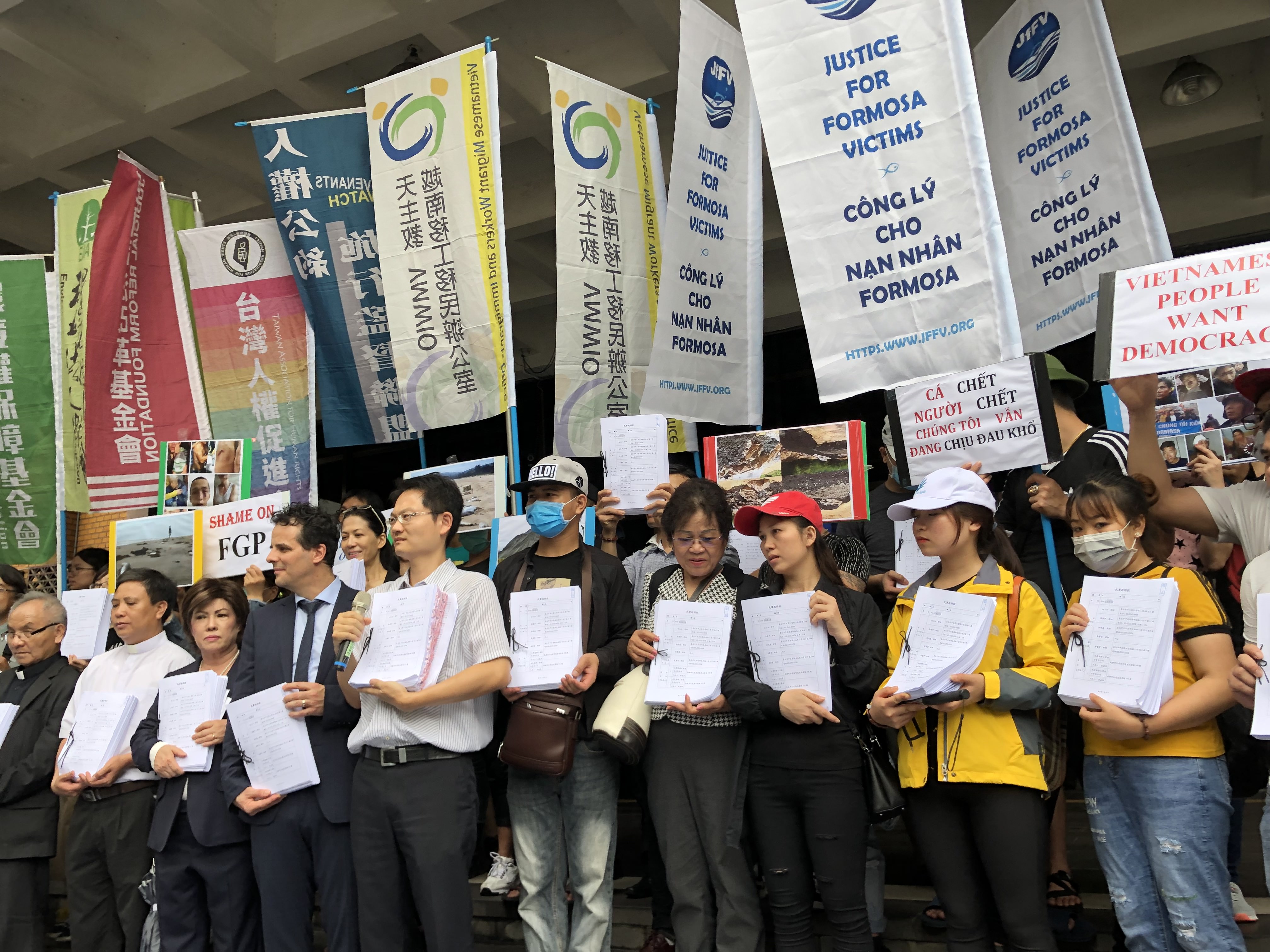 In a landmark move, victims of the 2016 marine disaster that affected the coastal communities in central Vietnam filed a transnational lawsuit against the Taiwanese corporation responsible for the environmental damage, Formosa Plastics Group (FPG), on Jun 11, 2019. If successful, this case could pave the way for new norms related to Taiwanese corporate responsibility for environmental protection in third-party countries.

With the assistance of environmental and human rights organizations in Taiwan, Vietnam, US, France and Canada, the legal representatives of the Vietnamese plaintiffs, a group composed of 7,875 victims of the marine disaster, presented the lawsuit against FPG at the Taipei district court on June 11.

The marine disaster, which took place on 6 April 2016, is seen as the most serious environmental disaster in Vietnamese history. The incident, caused by the discharge of toxic waste into the sea by FPG subsidiary Ha Tinh Steel Corporation, led to the death of massive amounts of fish and marine life in central Vietnam.

FPG accepted responsibility for the disaster on 30 June 2016 and agreed to give 500 million USD in compensation to the Vietnamese government for disaster relief work. However, the Vietnamese authorities have not released any information about the number of victims who have received any compensation. And for those who were compensated, they only received around US$ 2,430 dollars per household — an amount that can only support a person's expenses for one year, based on GDP per capital in Vietnam. Many affected community members have been forced to work in other cities or other countries. Other community members claim to have never received any compensation at all.

The victims tried to bring the case to local courts in Vietnam but were rejected, and many activists who reported on the pollution were arrested and jailed. In a recent case, 39-year-old shrimp farmer Nguyen Ngoc Anh was given a 6-year jail sentence for “making, storing, releasing, and circulating information and documents against the state.” Nguyen is one of the activists protesting against FPG over the 2016 marine disaster.

For the past three years, Taiwanese lawyers (with the help of Christian churches in Vietnam) have identified 7,875 plaintiffs and gathered evidence to prepare for this transnational litigation. Even though the number of victims is thought to be far more than 7,875, a civil liability case must be filed within three years after the liable party (in this case FPG) admits its negligence. The Taiwanese lawyers have to present the case in court before June 30, 2019, if they want it to be admissible. The lawyers are asking the judges to apply Vietnamese civil and environmental laws in the transnational lawsuit, and are asking for 4 million USD in compensation on behalf of their plaintiffs. 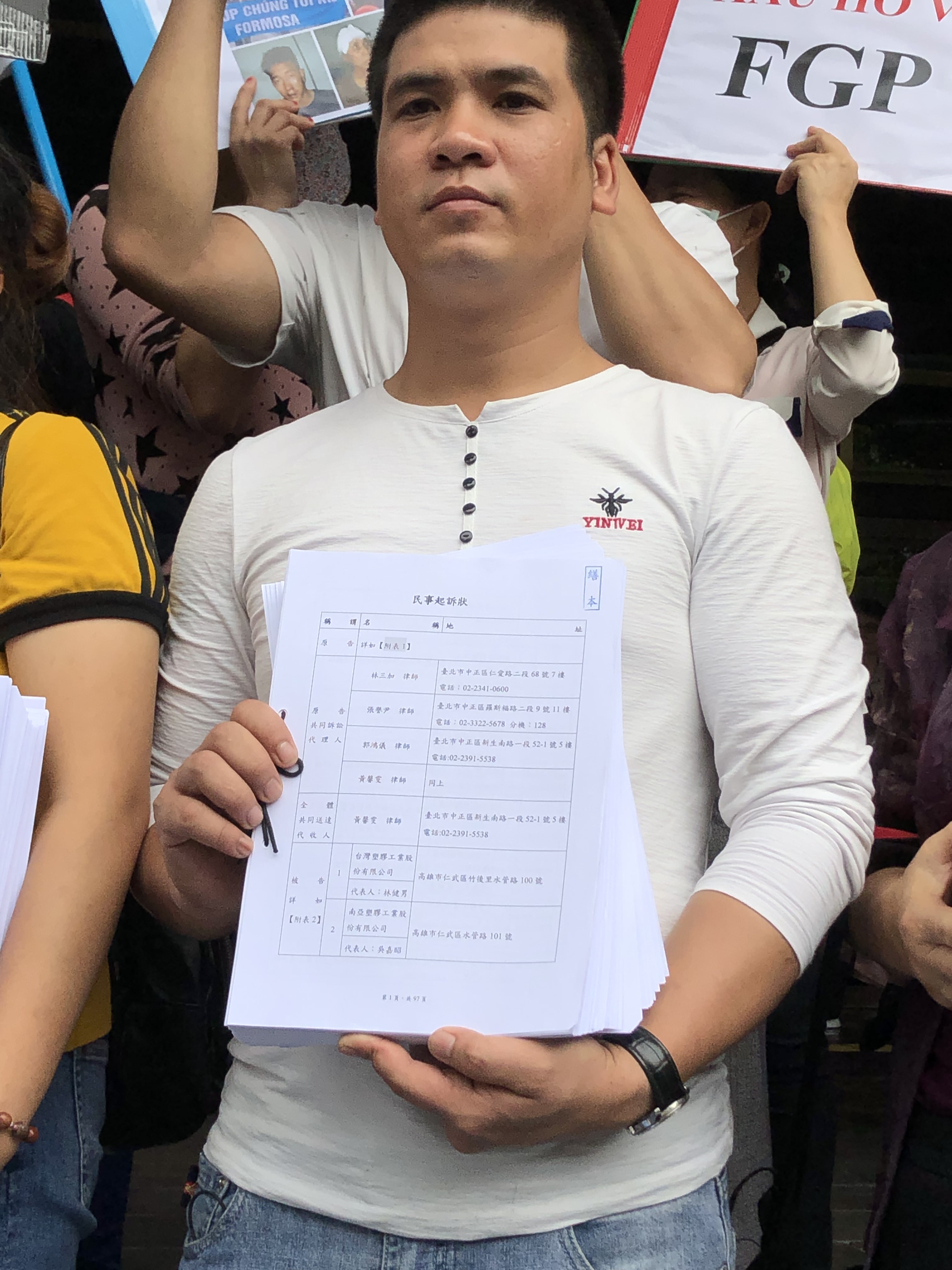 FPG's subsidiary, Ha Tinh Steel Corporation, is the largest foreign investor in Vietnam. Even after the marine disaster, FPG has continued to expand its steel mill investment in Vietnam. In May 2017, the first furnace of the steel mill in Ha Tinh started to operate and one year later the second furnace started to operate. Very soon the third furnace will start operating, according to an FPG press release.

Although the Vietnam Environment Administration claimed that the pollution from the steel mill in Ha Tinh has been carefully monitored after the disaster, there hasn't been any monitoring data released to the public yet. On the other hand, there were reports about how the fishery industry in the affected areas has declined dramatically after the marine disaster. In 2018, a report published by the BBC stated that fish were found dead in Ha Tinh again.

Apart from fisheries, local industries related to seafood like fish sauce factories or restaurants have also been seriously affected.

After the marine disaster in 2016, Mr. Chou Chun Fan from FPG said Vietnamese should choose between catching fish and shrimp or hosting a modern steel industry. Nevertheless, when the people chose “fish and shrimp” and protested against this steel mill, they were arrested and jailed.

For the Vietnamese plaintiffs, this lawsuit is not only about monetary compensation, but about justice, truth, democracy, and freedom of speech. It is about the relationship between humans and their environment.

After the marine disaster, the poem written by a non-professional poet Trần Thị Lam was widely downloaded in Vietnam because it touches many Vietnamese:

My country is so sad, isn't it?
Silver sea, green forest, blue rice fields
The forest is gone and the sea is dead
The boats remember the distant waves…