Brazilians took to the streets to protest Bolsonaro's education cuts 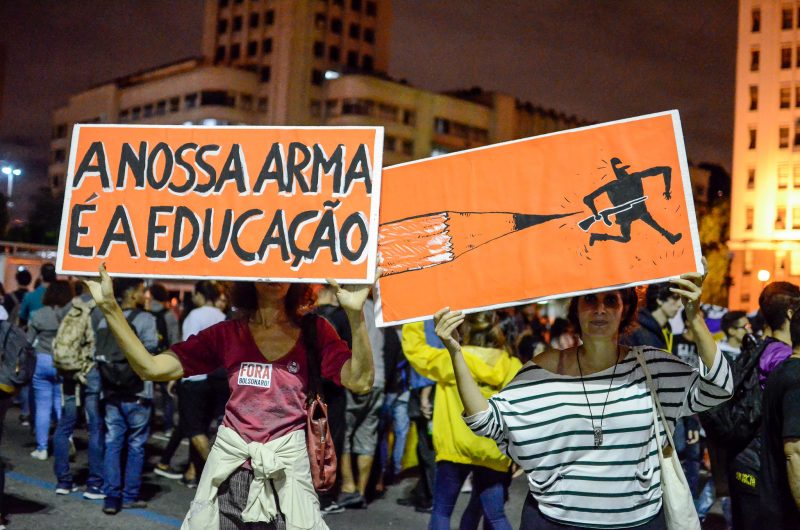 On May 15, thousands of Brazilians took to the streets in all 26 states and the Federal District against the Bolsonaro government's slashing of federal funds to education that will affect dozens of universities and schools.

At the end of April, Brazil's government announced cuts of 30 percent on a so-called discretionary budget, which goes towards expenses such as electricity, water, general maintenance, and research. When considering the total federal budget for higher education, the cuts would amount to around 3,5 percent. Besides, the government has suspended funds for 3,500 publicly-funded postgraduate scholarships.

From Paulista Avenue in São Paulo, a traditional gathering spot for protests, to far away indigenous lands in Alto Rio Negro, near the border with Colombia, people went out to defend their public education. In Viçosa, Minas Gerais, a crowd of around 5,000 people marched with umbrellas under heavy rain.

Brazil has 69 federal universities and a large number of state universities, all offering undergraduate and postgraduate education completely free of tuition, and several community-oriented services such as extension courses, legal assistance offices, and hospitals.

Initially, the cuts would apply to only three federal universities, but they were later extended to the entire federal network. Bolsonaro's Education Minister Abraham Weintraub says that they're not “cuts” but a “contingency of expenses.”

Weintraub has justified the cuts because public universities are “places of mayhem.” When asked by reporters to name examples of such “mayhem,” he mentioned the presence of social movements in campuses, and “parties with naked people.”

Weintraub was appointed as minister in early April after his short-lived predecessor's administration became involved in a series of controversies. The new minister often voices rightwing conspiracy theories, such as that crack cocaine was introduced in Brazil as part of a communist plot, and that he wants to erase “cultural Marxism” from universities.

Some university deans have said that the cuts might impede them from “opening their doors” as early as the second semester of 2019. The Federal Prosecutor's Office has sent a report to the attorney general claiming the cuts violate Brazil's Constitution.

Researchers at the Federal University of Minas Gerais (UFMG) who study WhatsApp groups in Brazil have detected conversations around universities on that messaging app in the days following the budget cut's announcement. The study has developed a tool that monitors WhatsApp groups and is widely used by fact-checking agencies in Brazil. Lead researcher Fabrício Benevuto said on a Facebook post on May 8:

[The images include] monographies/dissertation/events mocked by their titles and topics. There are images of naked people in parties (that aren't even in universities) and protests and memes that say university students take 12 years to graduate because they're on drugs all the time. It's clearly an orchestrated effort. A professional's job. It's the same style of the electoral campaign. Who finances this factory of disinformation?

An article by website Ciência na Rua (“science in the streets” in Portuguese) claims that public universities produce 95 percent of scientific research in Brazil. A study by the United States’ consultancy Clarivate Analytics in 2018 points out that on the top 20 universities with the most prominent research production, 15 are part of the federal network.

On the day of the protests, Minister Weintraub was summoned to testify about the budget cuts in the lower house of Congress.

“Bolsonaro is the enemy of Education”

Meanwhile, Bolsonaro was in Texas, in the United States, where he met former US president George W. Bush. When asked about the protests, the president said:

It’s natural [that protests happen], now, the majority of people there are militants with nothing inside their heads. If you ask the result of 7 times 8, they won’t know. If you ask about the composition of water, they won’t know, they know nothing. They are useful idiots, imbeciles, and are being manipulated by a canny minority that commands many federal universities in Brazil.