A consistent voice that spoke bitter truth to power

Screenshot of Professor Pius Adesanmi who lost his life in the Ethiopian Airlines Flight 302 crash on March 10, 2019.

Death arrives among all that sound / like a shoe with no foot in it, / like a suit with no man in it …

Pius Adesanmi — Nigerian-born Canadian professor, poet, literary critic and columnist — was among the 157 passengers aboard the Ethiopia Airlines Boeing 737 MAX 8 that crashed on March 10, 2019, just outside of the Ethiopian capital of Addis Ababa, with no survivors. Adesanmi was on his way to Nairobi as a guest speaker at the African Union's Economic, Social and Cultural Council meeting in Nairobi, Kenya.

Adesanmi joined Carleton University, Ottawa, Canada, in 2006 as a professor of literature and African studies and until his death served as Carleton’s director of the Institute of African Studies. 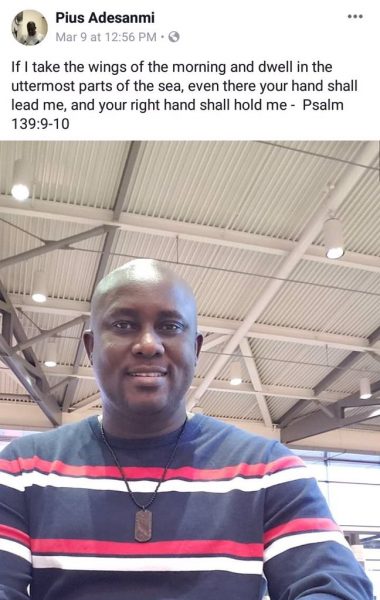 In July last year, Adesanmi survived a car accident while on a visit to Nigeria. He told SaharaReporters that “It was a miracle I survived. I nearly bled to death. No help for over four hours.”

His last post on Facebook sounded prophetic: “If I take the wings of the morning and dwell in the uttermost parts of the sea, even there your hand shall lead me, and your right hand shall hold me— Psalm 139:9-10.”

He traced his love for French back to his childhood when in 1978 his father became the principal of Saint Augustine’s College — a prominent Catholic secondary school in Kabba, old Kwara State.

Most of the Catholic missionaries hailed from Quebec, the French-speaking province of Canada. According to Adesanmi: “These priests detected my aptitude for language and learning and I went to live with them as an altar boy. … [T]he language around them was French and that was the beginning of my journey into the French world. …”

Professor Adesanmi was a towering scholar in postcolonial research. His book, “You’re Not a Country, Africa,” was the winner of the 2010 inaugural Penguin Prize for African writing in nonfiction. He engaged prolifically with Nigeria’s political story through his weekly columns — an affront to those in power and a consistent voice that spoke harsh and bitter truth to power. Adesanmi held no hostages.

Adesanmi bridged the gap between literature and political commentary in his book
“Naija No Dey Carry Last” (2015). This essay collection brimmed “full of questions, on which every Nigerian must reflect in order to end the endless repetitions of horror in Nigeria’s history,” Echezonnachukwu Ndukain explained. He employed “satire to create political awareness and national memory,” writer Udo Okoronkwo-Chukwu said.

As a public intellectual, Adesanmi had an ambidextrous gift for turning scholarship and creative writing into service for the common good. He used all his media platforms — Facebook, Twitter (@pius_adesanmi) timeline and his newspaper column — to engage issues arising from Nigeria’s murky socio-political milieu.

Nigerians mourn the loss of Professor Adesanmi with thoughts and memories pouring in via Twitter:

Could he have known? A mind as fine as sapphire and as clear as crystal. I say with pride that I knew him (He was my student in his undergraduate days) and I mourn the vanishing of this gem! Jee nke oma! https://t.co/Ei1zgiuOMv

I understand now why men go out drinking and pay for warmth in strange places. Because if we cry, if we cry, the elders fine us. Oh Pius, It is taboo to mourn you, I was supposed to go first. Son, where is my drink? I can’t do this sober. Onugo of my ancestors, what have we done? pic.twitter.com/BJBjTD29Vw

‘His wit was endearing as was his humor. His sarcasm spared no one!’

He was a scholar whose intellection was informed by a deep humanism and a strong belief that the human condition was capable of improvement through the application of reason and the pursuit of balance. His wit was endearing as was his humour. His sarcasm spared no one! A big loss. —Noel Ihebuzor, former Assistant Representative, UNICEF Nigeria

‘It’s hard to speak of Pius in the past tense.’

A towering intellectual with a mind that cut through issues like a scalpel who still remained curious about the issues of a younger would-be thinker, he inspired and supported me with kindness and warmth. It breaks my heart to have to come to terms with this loss. I remember … our meetings in Abuja and online — in Cyberia as he called it. It is his intellectual curiosity and dexterity with ideas, applying them in a way that have no doubt about his innate moral force — lost now so early — that brings tears to my eyes … Rest well, oga Pius. – Richard Ali, poet and publisher, Nigeria

‘Pius walked out and will not be back. May you find your way home, aburo.’

He came from my mum's village and may have been a cousin or so. I never tried to find out. We rarely agreed, as I always differed on basics with academics [who] left [Nigeria] and [I] felt there was nothing to be gained from [Nigeria] anymore … but if [Pius] spoke that way, he certainly never acted it. … [He always contributed by returning time and again and sometimes at his expense to contribute to discourse and training … My heart breaks for his aged mother whom he loved unashamedly. His wife and daughter Tishe, whose conversations were fodder for many of his write-ups as [Tishe] grew in the public domain. From his writings, I gleaned they had just moved house. They were settling in nicely. But Pius walked out and will not be back. Sigh. May you find your way home, aburo [younger brother]. — Dr. Adenike Olatunji-Akioye, Sub Dean, Faculty of Veterinary Medicine, University of Ibadan

‘A very visible member of the intellectual ferment in Ibadan …’

Pius Adesanmi — scholar, thinker and poet — made several valuable contributions to African and world discourses. I knew him from his days as a postgraduate student at the University of Ibadan in the mid '90s. He was a very visible member of the intellectual ferment in Ibadan at the time and a student of Harry Garuba. … From the days of Krazitivity, a Yahoo listserve of Nigerian writers spread across the world, to the emergence of Facebook and Twitter, Pius made many thoughtful and polemical interventions. His demise at the prime of life is a great shock indeed. Pius entered into African and World arguments armed with an arsenal of really sophisticated tools and we are going to miss his acuity and the access he gave the African public to a wealth of ideas which never even once succumbed to the agenda of colonialists. — Tade Ipadeola, poet and 2013 winner of Nigeria Prize for Literature

‘His message was simple: Africa needed a new set of young, vibrant and determined scholars.’

His concern about African scholarship was second to none. His message was simple: Africa needed a new set of young, vibrant and determined academic scholars. He did everything to ensure that the next generation of academic intellectuals did not fall into the same issues faced by scholars within the continent. … He understood the African academic terrain, perfectly. Interestingly, he knew a bit about everything. His global views on issues coupled with wide experience assisted him greatly when advising young scholars from several disciplines within and outside the African continent. Egbon (elder brother), in you, I saw hope for the future, In you I saw possibilities, in you I drew strength and courage. You fought for Africa, and died in Africa. Rest on, my intellectual soldier! — Daniel Nwogwugwu, Bowen University, Iwo