He was versed in discourse and Africa's streets 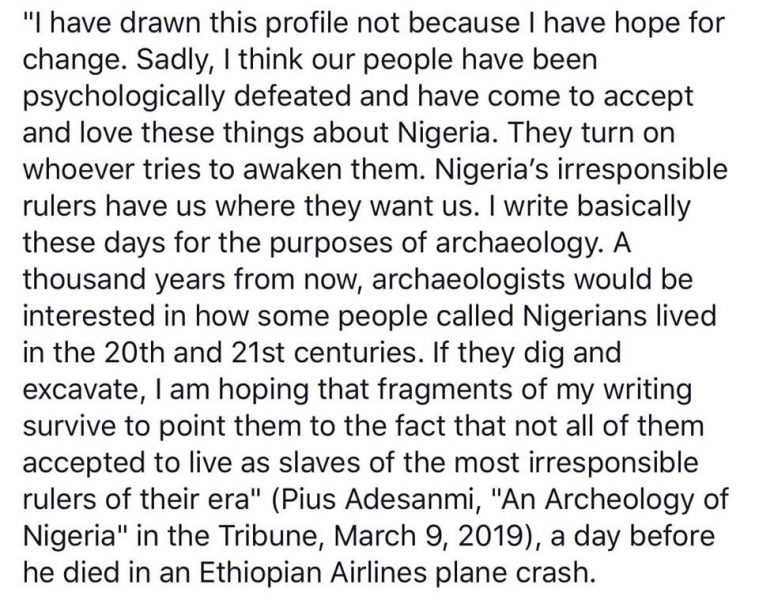 Screenshot of the concluding paragraph in “An Archaeology of Nigeria” by Pius Adesanmi via Nigerian Tribune, March 9, 2019.

It was a sober gathering — tributes, poetry and candlelight procession. On March 13, 2019, at the University of Ibadan, Nigeria, hundreds gathered in honour of Pius Adesanmi, the Nigerian postcolonial scholar and poet who died in the Ethiopian Airlines Flight 302 plane crash on March 10. There were no survivors.

A tree has fallen and the birds are homeless.
Sober and very emotionally charged gathering of friends of #PiusAdesanmi in the University of Ibadan. pic.twitter.com/KZXjxcqQBY

Observing the people who attended the memorial, Adesanmi touched each person's life that he encountered. Professor Remi Raji from the University of Ibadan asserted: “Pius has lived like a 90-year-old sage, even though he just turned 47,” in terms of his enormous impact on the world.

Adesanmi often expressed his frustration with Nigeria's almost rudderless leadership and passive citizenship. And like many who stand consistently on the side of the weak and oppressed, the propensity of losing hope is high. Reading the concluding paragraph of Adesanmi's “An Archaeology of Nigeria,” which he wrote a day before he died, it seems that he might have reached that stage.

But Adesanmi was wrong. The global outpouring of grief has shown that he did not fight in vain. His work influenced and continues to impact the lives of so many, and his legacy will thrive because his ideas resonate with so many in African academic and literary circles as well as internationally:

The Parable Of The Shower Head, One of my favorites by Prof. @pius_adesanmi RIP #PiusAdesanmi pic.twitter.com/1OIGFiBQjD

Friends, colleagues, fans of Adesanmi have continued to mourn his death. This is the second part of a series of tributes — shared exclusively with Global Voices — to one of Africa's finest public intellectuals.

‘If there is one thing that we can do to honour him, we Africans should not accept mediocrity in any form.’

Prof Adensami's passing is a gigantic loss not only to Nigeria and Canada, but to all of us, in every nation on our continent and the world. If there is one thing that we can do to honour him, is to remember Prof's parable of the shower head, and ensure that we as Africans do not accept mediocrity in any form, not from our leaders and certainly not from ourselves. Lala Ngoxolo [Sleep peacefully in Zulu]. — Angela Quintal, Africa Program Coordinator, Committee to Protect Journalists

‘A believer in popularising researched knowledge and disseminating complex thoughts.’ 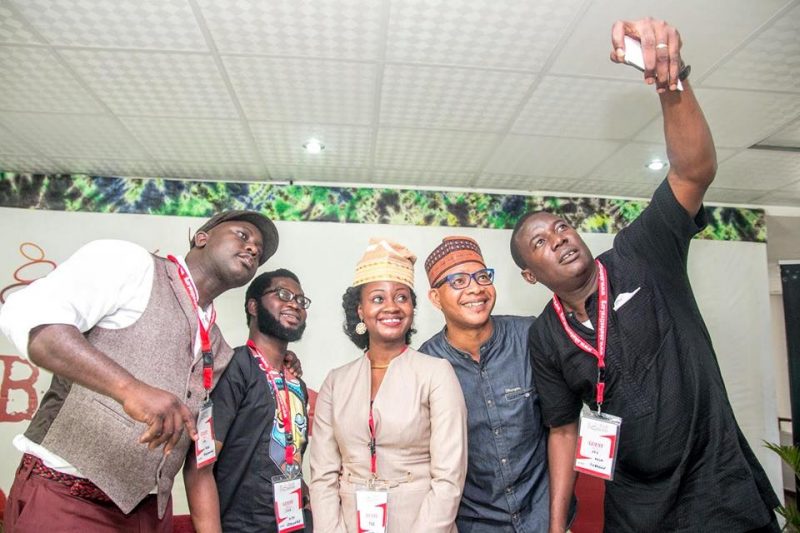 Pius Adesanmi was the antithesis to the conventional notion of a Nigerian academic. Contrary to the norm of the stuffy professor, he was energetic, self-deprecating, humorous, and willing to engage humans at different levels of literacy both online and offline. More importantly, he was a believer in popularising researched knowledge, disseminating complex thoughts in engaging and accessible ways. For me, he was an enabler and support system, a mentor who never hesitated to reference my thoughts despite his greater experience and expertise. The loss from his death cannot be exaggerated. The world has lost a rare type of human, Nigeria has lost a rare type of intellectual, and I have lost a rare type of friendship.   — Ayo Sogunro, writer and human rights lawyer

‘The paths chose you.’

Like I noted in my tribute poem: “The paths chose you — in memory of Pius Adesanmi,” Payo, as friends fondly called him, was a friend who chose his paths. Many paths, as you can see with the diverse people who mourn and also allowed his paths to choose him. He kept fidelity to friendship, sometimes chastising of those friends he disagreed with; but all of this he did with love of humanity that his being epitomized.  — Abdul Mahmud, human right activist and lawyer

‘He was as versed in the discourse of several disciplines as he was in the language of the streets, the tongue of Nigeria’s — nay Africa’s — bruised humanity’ 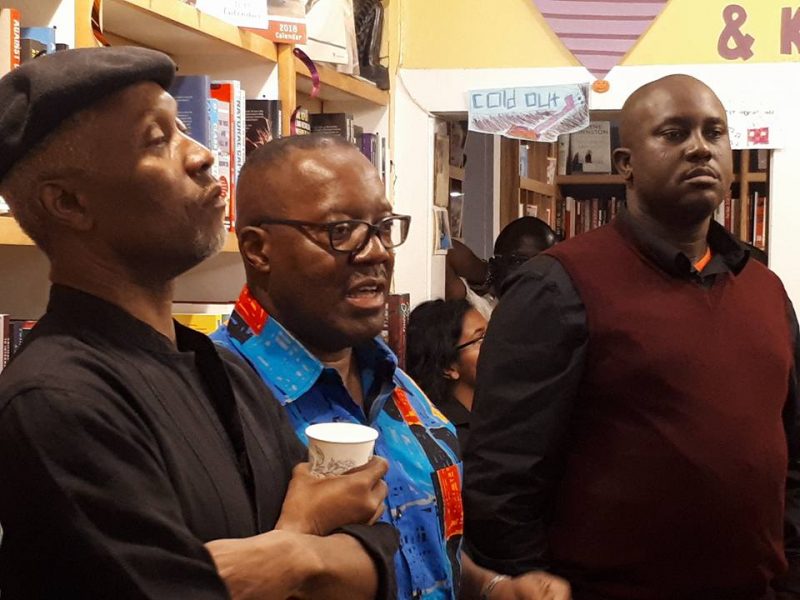 I remember Pius Adesanmi, Payo, as I called him — for his big-heartedness, his big laughter, his awe-inspiring kaleidoscopic intelligence, and his inexhaustible bag of jokes. Pius’ heart ached for a better run, humane Nigeria — a yearning that became an obsession, evident in his eloquent speeches and punditry. He was an accomplished scholar who was as versed in the discourse of several disciplines as he was in the language of the streets, the tongue of Nigeria’s—nay Africa’s—bruised humanity. Apart from his extraordinary scholarship — or, more to the point, integral to it — he was accomplished at friendship. Payo exuded a joyful humanity that was quite infectious and a delight to behold or experience. With his passing the world, for me, has become a dimmer place.   — Professor Okey Ndibe, writer and Shearing Fellow at the Black Mountain Institute at University of Nevada, Las Vegas

‘Pius wanted to get at the root of individuals’ behaviour …’

… One evening Pius called, he was angry and he wasn’t going to hide his angst. ‘Kilo man se iwo ati Sowore, ema lo si Nigeria eni sofun eyan, Olorun maje ka ri ko se dada?’ [Why do you and Ṣòwòrẹ́ do so, you will go to Nigeria and won't tell, may God forbid bad luck?] This was a reference to myself and Omoyele Sowore just showing up in Nigeria without letting friends and family know. Pius was of the opinion we took unnecessary risks and should at least let him know. I got the message and made it a point of duty to always inform him about my itinerary. Pius also kept to his side of the bargain.

Pius Adesanmi had no time for trivial conversations but he wanted to understand the reason behind people’s behaviour. His question usually goes like this: “Ba wo ni ore wa se wa se beyen?” [Can you explain the behaviour of our friend?] Pius wanted to get at the root of individuals’ behaviour: be it friends in government, our activist friends or his fellow writers. Pius was always at a loss why people misbehave. Pius loved Nigeria, he loved Africa. — Kayode Ogundamisi, political activist

‘Had that plane not dropped out of the sky, he would have gone on to become a juggernaut of African thought.’

In May 2011, I taught a seminar at Carleton University, Ottawa, where Pius Adesanmi was a professor of literature and African studies … The book I talked through with his students was Chinua Achebe’s ‘Arrow of God.’ It was Pius’ idea; he was going to be away on that day and I was the visiting lecturer taking charge of his class. He had emailed ahead to say he would tell his students that an “alejo pataki” (a very important visitor) was coming. He believed that much in me. He was generous with his intellect and scholarship, and with his art and spirit. …

Pius was that rarest of persons, his heart was filled to bursting with love and affection for those around him. He was thoughtful and insightful, brimming with kindness and decency. Had that plane not dropped out of the sky, he would have gone on to become a juggernaut of African thought. I had no doubt about this. I already had a measure of his searing intellect, his intimidating achievements. Many have spoken of his love for God and country. But Pius Adesanmi — the human being – to get a glimpse of that was a special privilege, indeed. — Molara Wood, writer, journalist and critique