How an Uyghur activist felt the long arm of the Chinese Communist party, in Canada

For two decades Rukiye Turdush thought she had left China behind but, last month, the country finally caught up with her. 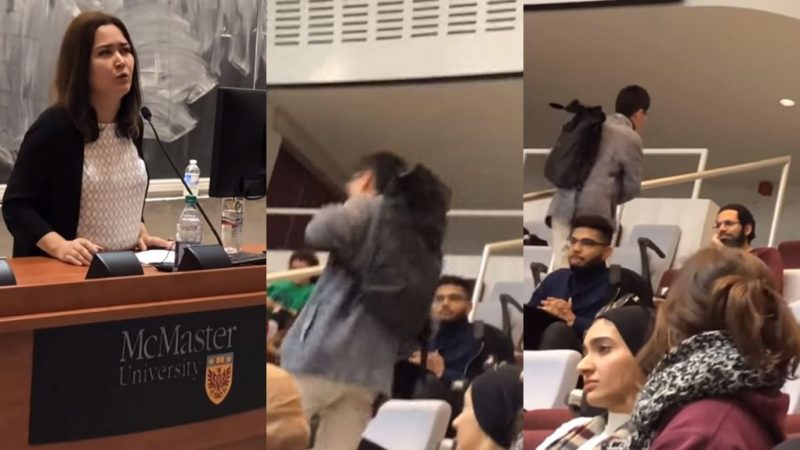 The man who filmed Rukiye Turdush was captured on video as he left. Youtube screen capture.

The following post is originally written by Holmes Chan and published on Hong Kong Free Press on 3 of March, 2019. The trimmed version is republished on Global Voices under a content partnership agreement.

For two decades Rukiye Turdush thought she had left China behind but, last month, the country finally caught up with her.

The Uyghur-Canadian activist was speaking at Ontario’s McMaster University on February 11 when she was interrupted by a shouting Chinese student. She was addressing the plight of over a million Muslim Uighurs, who have been detained en masse alongside other ethnic minorities by the Chinese government in Xinjiang and allegedly subjected to human rights abuses.

What began as a brief confrontation soon hit the national headlines, after it was revealed that Chinese students at the university were in contact with Beijing’s embassy in Canada.

For Turdush, 48, the impact is also personal: the incident brought back memories of her traumatic departure from China in the 1990s, and cast doubt on the future of the Uyghur community in Canada which she has helped shape.

From Xinjiang to Canada

Turdush’s journey to Canada was prompted in part by her brother’s death in 1992. At the time, Uyghurs in Xinjiang – also known locally as East Turkestan – were on the receiving end of aggressive population and economic policies enacted by the Communist Party of China, which prioritised Han Chinese interests to an extreme. She explained:

The people were dissatisfied with [Han Chinese immigration] because they see the dominance of land and economic segregation…My brother protested with a few friends… I heard later on that hundreds of soldiers came fighting those five, six protesters and my brother didn’t run away and was killed on the scene.

Just before she emigrate to Canada in 1999, she had encountered another brush with China’s discriminatory and abusive policies towards Uyghurs.

On the night before her flight, she was carrying her infant son and found herself repeatedly turned away from hotels in Beijing because of her ethnicity. Eventually, she found a place to stay but was abruptly woken up in the early hours by soldiers in uniform.

“Chinese soldiers – not the police – burst into the hotel room and my baby started to scream,” she said. Soldiers held her at gunpoint, searched the room and then evicted her, she said. “Even now, many years later, if I hear loud noises at night I wake up, I’m shaking.”

After arriving in Canada, Turdush studied international relations and social work, eventually getting a licence as a counsellor. Nowadays she works as a part-time social worker, and also spends time on activism, research and community-building.

She said the Uyghur community in Canada used to focus on culture rather than politics – but that all changed in 2017,

Since 2017 [the Chinese government] started to arrest everyone in East Turkestan so, right now, everybody – everybody – is involved in politics… even those who don’t usually speak out against China have found their extended family being targeted. I asked my dad, how many of them are inside, and he said, you have to count how many are outside, because all of them are inside.

University standoff over talks on mass incarceration of Uyghurs

Turdush’s appearance at McMaster University in Ontario came immediately after the emergence of #MeTooUyghur, an online campaign that demands accountability for missing family members.

The Chinese government had just put out a video debunking the reported “death” of notable Uyghur musician Abdurehim Heyit, and the Uyghur community was hoping to pressure China into more transparency.

Online activism was not new to Turdush, as she had been making YouTube videos on the plight of Uyghurs for years. She also had experience with speaking engagements, so when students from McMaster University invited her to a campus talk, she agreed.

Her presentation at McMaster on February 11 was an overview of the mass incarceration of Uyghurs in Xinjiang – citing satellite photos and other academic and journalistic sources. During her talk, Turdush said she spotted a Han Chinese audience member, who she believed to be a student, filming her and making faces.

She said she did not object to being filmed as it was not a closed-door event, but the man had a “sarcastic smile” and “hateful expression” that left her uncomfortable.

When it was time for the hour-long question-and-answer session, she asked the Chinese student if he had any questions, to which he said “no.” Turdush then asked the man what he thought about the presentation.

“He just [repeated] two words: ‘you, McMaster,'” Turdush recalled, which she took to mean that the man disapproved of her speaking at the university.

“I said, ‘You see, this is the typical Chinese behaviour that is controlled or brainwashed by the government’… and then he said the f-word,” she added. After the man left, Turdush resumed the talk.

A Washington Post report later published interactions within a WeChat group of Chinese students at McMaster, where a user known as “Mr Shark” drew the students’ attention to a brochure of Turdush’s talk.

According to the report, people in the chat expressed condemnation and disbelief, with some saying that they should contact the Chinese consulate. However, Mr Shark told the Post:

We study-abroad students don’t know anything about politics, we just know our personal interest and our sense of belonging to our nation… If other people hurt us, smear us, we have to counter-attack.

The day after the event, the Chinese Students and Scholars Association – along with some other McMaster student groups – issued a joint statement decrying the talk as “promoting ethnic hatred” and separatism. It also asked that the university uphold its “duty of supervision” and ensure that, in the future, Chinese students’ “dignity won’t be infringed.”

Turdush said she had strong suspicions about the Chinese government’s involvement, which stemmed from how closely the students’ statement resembled the official line:

The language of the statement has a lot of echoes of the Chinese Communist Party. It’s usually the CCP that uses that kind of language, like: the people are happy over there [in Xinjiang], they have a good relationship, living in harmony.

The Chinese embassy in Canada denied any involvement, but nevertheless praised the students’ actions as “just and patriotic.” It further defended the students’ behaviour on the grounds of free speech.

The incident may have started as a debate over free speech, but as it turned out, there was also the looming threat of physical action.

The National Post in Canada reported that a person in the Chinese students’ WeChat group tried to identify Turdush’s son, who she had previously said was a student at McMaster. The user wrote: “Find out about her son.”

A McMaster University spokesperson has declined to confirm whether Turdush’s son was a student, but said that “student health and well-being is a top priority for the university.”

As the media spotlight fades following the incident, Turdush said that the university has a duty to follow up on the incident, if for no other reason than to ensure that its standards for academic freedom were not compromised by Chinese influence.

It is important to pay attention to China’s efforts to export authoritarianism, and push back its attempts to legitimise human rights abuses against Uyghurs, she said.