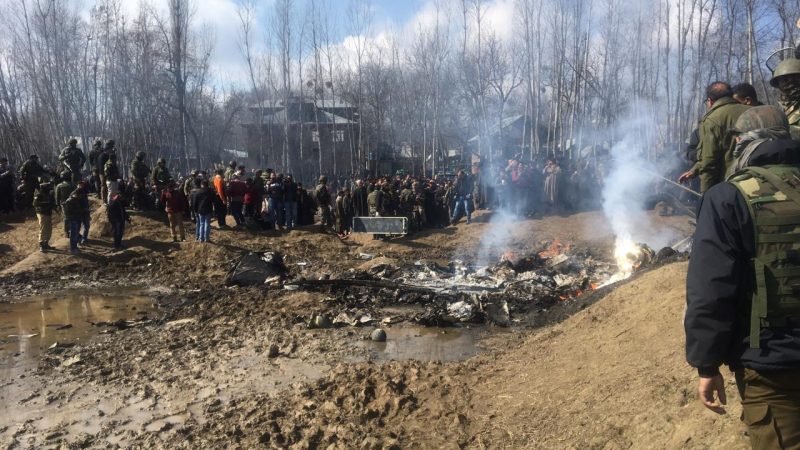 The action by Pakistan follows a February 26 airstrike by the Indian Air Force (IAF) on a training camp of the Jaish-e-Mohammad (JeM) group in Balakot in Northwestern Pakistan. The strike was itself in retaliation for the suicide bombing of a convoy in Pulwama, a district in Indian-administered Jammu and Kashmir, that killed 40 Indian paramilitary police.

The current situation represents the biggest escalation of tensions between the two South Asian nuclear-armed rivals in over three decades. The aerial attack on Balakot was the first time in five decades that Indian military aircraft have entered Pakistani airspace, and the extent of the casualties and impact has been hotly contested, with Reuters bureaus in the two countries offering differing accounts.

According to reports, the PAF jets were pushed back by Indian Air Force (IAF) aircraft patrolling the area, with both sides reportedly losing aircraft in the skirmish.

In response to PAF strikes this morning as released by MoFA, IAF crossed LOC. PAF shot down two Indian aircrafts inside Pakistani airspace. One of the aircraft fell inside AJ&K while other fell inside IOK. One Indian pilot arrested by troops on ground while two in the area.

One of the Pakistani jets reportedly dropped bombs near an Indian army post, an action the Pakistani foreign ministry later defended as “strikes at non-military target, avoiding human loss, to demonstrate right, capability for self-defence”.

India immediately closed five airports near the border of Pakistan, including Srinagar, Jammu and Leh, and suspended civilian traffic, diverting all the flights bound to these airports.

Pakistan also stopped its domestic and international flight operations from Lahore, Multan, Faisalabad, Sialkot and Islamabad airports. The Flightradar24.com image below indicates the state of the airspace above the two nations at around 4:00 PM Pakistan Standard Time: 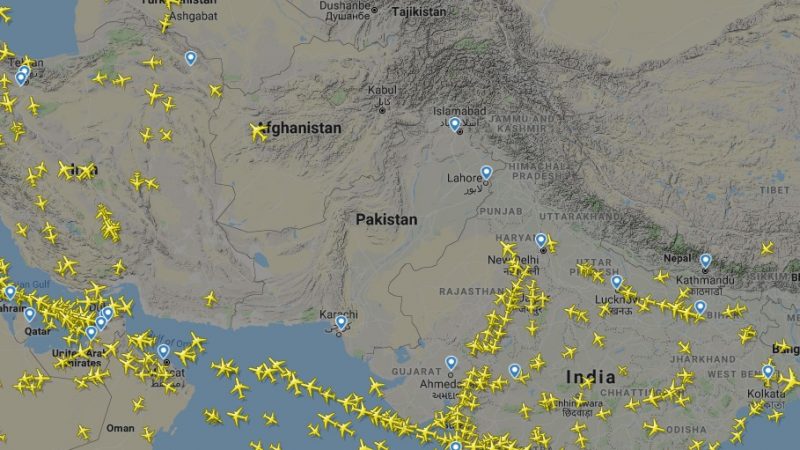 According to reports, residents of the border areas have been instructed to remain inside their homes and not venture outside. The Indian Railways service has issued a security alert across its network.

In the wake of the Pakistan Air Force actions on February 27, Pakistan's prime minister Imran Khan offered to engage in dialogue with India to de-escalate the situation.

“We understand the grief that you have suffered in Pulwama and are ready for a probe and dialogue, Khan said, according to reports. “Let's sit together and settle this with talks,” he added.

With general elections in India just weeks away, however, Indian prime minister Narendra Modi, who, with his Bharatiya Janata Party (BJP), is battling for re-election amidst high unemployment and a slowdown in the economy, has been trumpeting the success of the strike on Balakot. Speaking at a rally, Modi reiterated that under him India was in safe hands, without specific reference to the February 26 attack.

Today's strong action shows the will and resolve of a New India.
Our New India will not spare any acts of terror and their perpetrators and patrons.

Foreign policy analyst Kabir Taneja expressed the opinion on Facebook that the attack on Balakot was mostly “symbolic in nature”:

Will this end terrorism? No. Will it contain it in long term? Probably not. But a lot more was achieved in signaling and significantly altering the shackles of counter-terror policies than just destroying a campsite on a hilltop.

But social media in both India and Pakistan exploded with memes and jingoism celebrating both the ‘success’ and ‘failure’ of the Balakot attack. While many Indians hailed it as a victory, lauding Indian Air Force (IAF), Pakistani netizens questioned the validity of those claims. Already embattled residents of India-administered Kashmir lamented the continued stress.

Indian journalist Barkha Dutt, who is frequently trolled by right-wingers, came out in favour of the IAF strike on Balakot:

I am an Indian journalist who cut my teeth reporting war from the front line. I have no faux neutrality about my country being engaged in a decades old low grade war by Pakistan backed terror groups. My full support to @IAF_MCC for this. This is not war mongering. Its justice https://t.co/CQQcoxrCEA

Dutt faced backlash from Pakistani twiterati such as Ammar Rashid, a political activist:

Do you truly believe the violence is just reducible to the actions of the Pak state? That otherwise Kashmir would be happily integrated into India?

I fully condemn & call out my state's reckless support of militancy. Can you condemn the repressive role yours has played?

For all those mindlessly advocating war (that includes you @BDUTT) as if this is some game, listen to the voices of the people who live near the border. It is them and the soldiers on both sides who will pay the heavy price if this continues to escalate. #balakot https://t.co/FyPTTJGT5e

Other rational voices questioned the ‘news studio-based war cries’ and advocated peace. Shah Faesal, former Director of Education in Indian-administered Kashmir raised the question of who would gain from the confict:

How can yesterday's mourners become cheerleaders of today's violence?

This war-mongering, glorification of violence, arguments for necessity of violence for political ends, false distinctions between state and non-state violence, are all against the basic values of humanity.

It's sad to see India go down the route of nationalism this way. It has produced civil servants, academics and scholars far more capable than anything Pakistan has. Nehru and Gandhi; combine the collective intelligence of Pakistani leaders and they wont compare to those two.

The former chief minister of Jammu and Kashmir Mehbooba Mufti lamented the war cries and its impact on Kashmiri citizens:

Todays IAF strikes were followed by mass war hysteria on twitter & news channels. Most of these people are ignorant who have suspended the use of common sense. But its disconcerting that educated privileged people are cheering on at the prospect of a war. This is true jahaalat.

Since the #Pulwamaattack, Kashmiris faced the brunt – outside were mob attacks and inside been living in an atmosphere of war. Now with today, the fear, anxiety, loss of hope of any possible peaceful future vanishing, #Kashmir continues to face more, knowing it isn't over yet.