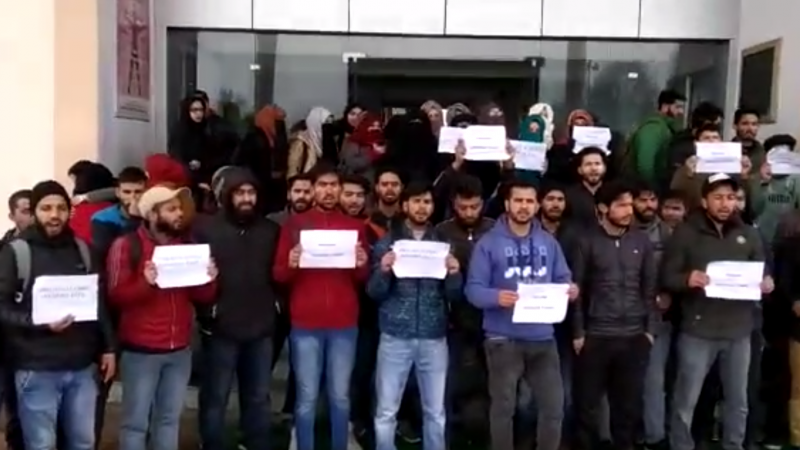 Students protests in Sopore, Srinagar against attacks on Kashmiris outside valley. Screenshot from Youtube Video by Kashmir Despatch.

Amid multiple protests across India over a recent terrorist attack in Srinagar's Pulwama village that killed over 40 soldiers, hundreds of Kashmiri students and businesses facing attacks from right-wing groups returned to the valley from a number of other Indian cities.

The backlash, stemming from last week's terror attack by a suicide bomber who used a car-bomb to kill Indian military soldiers near Srinagar on 14th of February 2019, has triggered a spate of fake news hoaxes and anti-Kashmiri propaganda which has led to the persecution of citizens from Indian-administered Kashmir.

As per a report from Free Press Kashmir, on 14th February, Kashmiris were attacked in Jammu's Janipur area. A government official hailing from Kashmir blamed police officials for lack of empathy:

“At 9 o clock in the morning, their shift changed. At 9.15 am, we were attacked from all the sides. A mob of thousands of Jammu locals came, damaged our vehicles and even injured us. We begged the police. We even touched their feet asking them to save us. But, theywere running away from us. The kids and women with us were wailing and it didn’t melt their heart.”

The Indian government claims and numerous reports state that the terrorist attack was carried out by local militant Adil Ahmad from a terrorist group, Jaish-e-Mohammad (JeM), which India also claims receives sanctuary in Pakistan. Indian political outfits and Prime Minister Narendra Modi who belongs to the right-wing Bharatiya Janata Party (BJP) promised to isolate Pakistan internationally for supporting the militant groups. But, in a rebuttal, Pakistan Prime Minister Imran Khan denied these claims and warned his neighbor that the country would respond if attacked — acts that could lead to an all-out war between the nuclear-armed rivals.

Meanwhile, the governor of the northeastern state of Meghalaya, Tathagata Roy, took to Twitter and asked people to refrain from visiting Kashmir and ‘boycott everything Kashmiri’ thereby fanning the flames of anti-Kashmir sentiment.

An appeal from a retired colonel of the Indian Army: Don’t visit Kashmir,don’t go to Amarnath for the next 2 years. Don’t buy articles from Kashmir emporia or Kashmiri tradesman who come every winter. Boycott everything Kashmiri.
I am inclined to agree

Lawyers and experts questioned this tweet as multiple journalists and activists have previously punished under India's sedition law, but this tweet went unabated and without any action from the government:

Governor of Meghalaya has committed sedition

Notice the silence from Arnab & other BJP supporters

These ppl are not patriotic they are opportunistic

The attack, which made headlines amidst Saudi Crown Prince Mohammed bin Salman‘s visit to India following a meeting with Pakistani Prime Minister Imran Khan has polarized social media with an influx of fake news videos, vengeful posts against Kashmiris and opened a cauldron of political hate speech ahead of India's general elections scheduled in spring.

India and Pakistan have fought three times over Kashmir, highlighting the region's complex history and its struggle for sovereignty and independence that was promised with a referendum after the birth of India and Pakistan in 1947. Instead, both countries divided Kashmir and multiple human rights cases of abuse, sexual assault and enforced disappearances, have marred the region while citizens seek a ‘referendum’ as outlined by this detailed Global Voices report.

Read: The Kashmiri People Versus the Indian State

Priya Dutt, a politician from Mumbai expressed anguish over reports of violence against Kashmiris:

News of kashmiri students being attacked by mobs in Dehradun is saddened me , Kashmir is our state and the Kashmiri people our brethren, this is not the time to be divided and fight our own, that is what they want, we must stand as one and protect eachother. India is ONE

Those attacking or abusing #Kashmiris citizens in heartland are NOT being patriotic. They are in fact the ones being anti national. Because they are playing into what terrorists want – to polarize, communalize and divide . Focus on the adversary. STOP THIS #KashmirTerrorAttack

Kashmiri activist Shehla Rashid has been using Twitter to aid students who were harassed by college officials or goons to evacuate and travel back safely to their home region. She also highlighted how right-wing trolls were making the process more difficult.

I'm getting DMs from BJP men with obviously fake appeals: "Mam, Brahmans are attacking us Muslims. Please help.", "Mam, we are being attacked by extremist Hindus."

Sorry, but Kashmiris do not text like this!! Please stop making fun of a moment of national grief. pic.twitter.com/O14pGJrTJ5

Painful instances were captured in videos of Kashmiri students being attacked.

A Kashmiri is repeatedly saying, 'Hamari kya galti hai', when attacked by a mob.
I can't get it out of my head. https://t.co/vhMbDrVaTz

Just watched some horrible videos containing violence, threats, abuse and vandalism against Kashmiris in Haryana, Bihar, Jammu and elsewhere. I have decided against sharing the video footage. In one such video a Kashmiri mela is attacked by a group of goons in Bihar.

Not only are kashmiri students attacked in India, small time traders are harassed and whatsapp forwards going around to boycott Kashmiris, throw them out of rented apartments. @OmarAbdullah @MehboobaMufti @JmuKmrPolice pic.twitter.com/uVyxkDcYz4

Meanwhile, fake images and doctored videos were shared on social media after the incident, fanning flames of hatred. A Google employee was shocked at the scale of fake news while Facebook too stepped in to counter the surge.

I've never seen anything like this before – the scale of fake content circulating on one story https://t.co/Ce2Yh7IdVW

India's Central Reserve Police Force had to step in and ask Indians to stop spreading fake news on social media:

ADVISORY: It has been noticed that on social media some miscreants are trying to circulate fake pictures of body parts of our Martyrs to invoke hatred while we stand united. Please DO NOT circulate/share/like such photographs or posts. Report such content at webpro@crpf.gov.in

In a Tweet, Faesal sought help to safeguard Kashmiris scattered across India with lack of legal support:

Are there any HR lawyers who can help students detained in Solan HP, Dehradun, Bangalore?
Please inbox.
Kashmiri students have the right to legal aid.
Constitution gives it to them.
And no one in this country can deny this right to them.
Matter urgent.

Seeing all this, I’m forced to cancel my planned trip to Delhi. I missed the city having worked/studied there for years, but now its better to be home, for now. https://t.co/pt4SvXqW3q

It is time to mourn and grieve but this tragedy also calls for introspection. The last couple of years our national security has been reduced to using our armed forces for political propaganda and pre-election rhetoric. Our country needs a policy not ministers declaring josh.

On Tuesday, Indian agencies reported that they killed JeM commander Abdul Ghazi, the alleged mastermind of the attack. But the operations also killed more soldiers, police officers and civilians as Kashmir struggles to return to normalcy.