‘Serene and committed.’ This legendary Afghan educator's legacy will burn brightly through generations 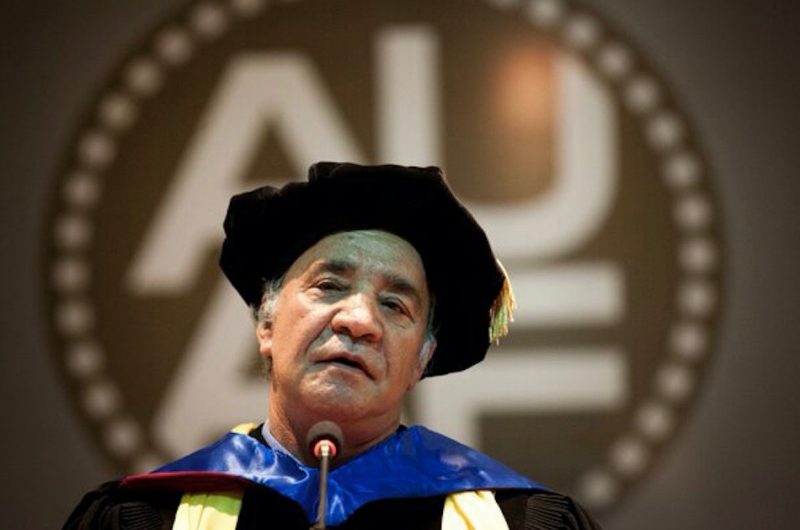 Dr. Mohamamd Sharif Fayez. Used with permission of the American University of Afghanistan.

A few weeks ago, on a bracingly cold day in Kabul, a horde of freshman students packed into a large auditorium for their orientation at Afghanistan’s leading private university, the American University of Afghanistan (AUAF).

“Ladies and gentlemen, please welcome,” the emcee roared, clearing his throat, “Dr. Mohammad Sharif Fayez, the founder of the American University of Afghanistan!”

Even as Dr. Fayez inched slowly towards the stage, betraying his physical frailty, he commanded the complete attention of the young audience.

When he spoke, it was in a voice that was measured and tender.

“Before beginning my speech, I would like to ask you a question. What is Academic Freedom?”

“Academic freedom,” Dr. Fayez continued, “is freedom of inquiry in an academic environment that you [students] should have the freedom to communicate ideas or facts without the fear of being targeted for repression. That you are free to express your opinion without fear from institutional censorship or discipline. That you are free to question your professor whenever you think otherwise.”

Dr. Mohammad Sharif Fayez, a relentless educator, academic figure, and poet, who was the former Minister of Higher Education and founder of AUAF, was pronounced dead at 73 on February 8. He is survived by his wife and two children.

The news of Dr. Fayez's death brought with it a wave of grief and mourning for a statesman whose contribution to the gains made in Afghan education since 2001 is probably impossible to overestimate.

A story of turbulence and triumph

His acclaimed doctoral dissertation epitomised his life's work bridging Eastern and Western cultures of learning. In it he demonstrated the influence of Rumi, a Persian poet of the 13th century, on the 19th century American writer Walt Whitman.

In a 96-page memoir published in 2014 (An Undesirable Element: An Afghan Memoir) Dr. Fayez wrote about the turbulence of his return to Afghanistan following his studies abroad. Less than a year after he took up a teaching job at Kabul University, the Soviet Union invaded Afghanistan, forcing him to join thousands of others fleeing to Iran.

Once there, his arrival coincided with the onset of the Islamic Revolution under the leadership of Grand Ayatollah Rohullah Khomeini. After five years of scrapping for survival, he gratefully an offer from his Arizona alma mater to serve as a visiting scholar.

During these most difficult times — the Afghan-Soviet war of the late 1980s, the Afghan civil war of the early 1990s, and the Taliban government in the  1990s — Dr. Fayez emerged as one of the most prominent voices of resistance among the Afghan diaspora. He authored hundreds of articles and advocated tirelessly for human rights in his homeland.

When the Taliban was unseated by a US-led invasion in 2001, Dr. Fayez became the new government's first Minister of Higher Education.

Reviled by conservatives and championed by progressives, he quickly went about overhauling an education system that had been reduced to a shell by decades of war and the extreme conservatism of the Taliban.

His reforms restored co-education to the country and saw six new universities established, including the flagship American University of Afghanistan (AUAF). Few politicians of the era can claim achievements comparable in scale.

A legacy to inspire

Following the tragic news of his passing politicians, scholars, activists, writers and students rushed to honour Dr. Fayez and his extraordinary legacy.

President Ashraf Ghani described Dr. Fayez as “a brilliant professor, who played a significant role in enlightening the society and adorning the young generation of science and knowledge.”

AUAF President Dr. Kenneth Holland mourned the loss of “one of the university's greatest friends”, whose vision would “live on through one of his precious children, the American University of Afghanistan.”

Dr. Rangin Dadfar Spanta, a close friend of Dr. Fayez and a former National Security Advisor, wrote in a statement that the academic's “writing was powerful and his love for Persian appreciable. He was one of the [great] Jami scholars of our country. This is a huge loss for Afghanistan, a country too poor when it comes to such figures.”

Spanta was among a number of diaspora Afghans Dr. Fayez enthusiastically implored to return to the country to help with his higher education revamp.

“He brought me back to Afghanistan to teach at Kabul University…I stayed, and yet he left us all alone. I am deeply saddened,” Dr. Spanta said in his statement.

Despite their young age, many of Dr. Fayez's students at the AUAF have already gone on to take leadership roles in Afghan government and civil society, becoming amplifiers of his progressive vision.

Madadi wrote on Facebook: “Sharif Fayez was one of the best people of this country — a serene, deep, and committed man who worked hard in silence. He used to think more and speak less. He loved and valued questioning.”

My own encounters with Dr. Fayez on campus were fleeting but unforgettable. On one occasion he engaged me outside his office as he was hurrying to a meeting.

“What do you want to do later, in your career?” he asked during the brief exchange.

I told him that I was fascinated by political science, and wanted to continue studying it.

“Great, then you should. I see you doing something great, not settling for anything small,” he replied warmly, before continuing along his path.

They were a few kind words — the sort he had probably told plenty of others — but charged with enough inspiration to last for generations.

Editor's note: Maisam Iltaf is a regular Global Voices contributor who works and studies at the American University of Afghanistan.