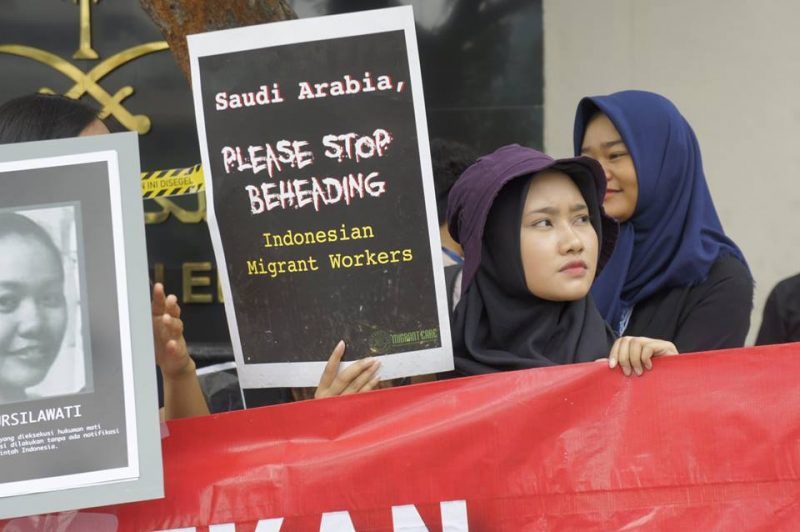 Activists carrying posters, inlcuding one with a photo of Tuty Tursilawati, who was executed in Saudi Arabia on on October 29, 2018. Photo courtesy of Migrant Care. Used with permission.

On October 29, 2018, the Saudi Arabian government executed Tuty Tursilawati, an Indonesian overseas worker, without sending a consular notification to inform the Indonesian government of its intention.

According to the Indonesian Migrant Workers Union, which has been investigating her case since 2010, Tursilawati was imprisoned after she murdered her employer's father, whom she alleged had sexually abused her. At the time, she has been working with the family for eight months, but had only received a salary for the first two months of employment.

After committing the murder, Tursilawati fled to Mecca with some stolen jewelry and money. En route, she told the NGO that assisted her, she was gang-raped and robbed by nine men.

Sad news once again arrived from Saudi Arabia. Tuty Tursilawati, Indonesian migrant worker from Majalengka, was executed on October 29, 2018. The execution was carried out without prior notification to the Indonesian government. #RIPTuty #stophukumanmati [stop the death penalty]

I condemn the execution of Tuty Tursilawati. Not only the Saudi government failed to notify [our consulate], but also because capital punishment doubtfully would prevent crime. My other question is, did she get a fair trial?

Anyone who's willing to work overseas doesn't want to hurt their master. [Nobody wants] to act violently, if it's not for self defense, to defend their honor, and life. To me, Tuty is a hero who struggled for her destiny and her family's. Just like the late Siti Zaenab's [another Indonesian migrant worker who was executed in 2015] who dreamt to make ends meet for her children and family. When will Saudi Arabia learn to respect humanity … killing means violating someone's right to live. [I'm] saddened and angered, because capital punishment is still implemented in my country.  #stopcapitalpunishment

Farewell, Tuti. What would be the most effective way to stop this from repeating? And could the Indonesian government or anyone do something serious [such as a strong demand], so that her death will not be in vain?

Saudi Arabia has repeatedly executed Indonesian overseas workers in recent years. According to the Indonesian Ministry of Foreign Affairs, around 103 Indonesians were handed death sentences in Saudi Arabia between 2011 and 2018.

Tuty was not the first Indonesian migrant worker to be executed by the Saudi government in 2018. Earlier this year, the Kingdom also executed Muhammad Zaini Masrin, an Indonesian man who said he was forced to sign a confession saying he had killed his employer. Sentenced in 2004, he spent 14 years in jail before being executed. The Indonesian consulate in Jeddah learned about Masrin's ordeal only after his sentence was announced.

At a press conference, Al Shuaibi offered a tone-deaf explanation, suggesting that Tuty's execution was intended to absolve her of the sin she committed. The ambassador also dismissed claims that Tuty acted in self-defence, saying that the person she murdered was an elder. He also pointed out that Tuty's crime was a “had ghilah”, or pre-meditated, so releasing her would not have been possible, even if the murdered man's family had agreed to forgive her.

In 2015, Indonesia stopped sending migrant workers to Saudi Arabia in light of the reported abuses against domestic helpers, but the official moratorium didn't stop illegal traffickers from sending undocumented workers or workers with false identification documents. Indonesian Minister of Manpower Hanif Dhakiri said recently that the moratorium is still in effect and Jakarta has no plans to lift the ban.

Adel al-Jubeir, the Saudi minister of foreign affairs, had visited Jakarta for a meeting with his counterpart, Minister Retno Marsudi, one week before the execution. But it is unclear whether Tuty's execution and the cases of other Indonesian migrant workers were discussed during the meeting.

In the wake of condemnations of Tuty's execution, Indonesia wants Saudi Arabia to sign a mandatory consular notification (MCN) agreement. This would allow Indonesia to be informed of citizens needing legal assistance in Saudi Arabia. Currently, only three countries have signed MCN agreements with Indonesia — Australia, Philippines and Brunei.

Global human rights defenders have criticized the Kafala (sponsorship) system as a “gateway to slavery”. Kafala is practiced in the Arab Gulf countries as well as in Lebanon and Jordan.

I often talk about #Saudi repression of women’s rights which I call gender apartheid, enforced by guardianship system. It’s even worse for domestic workers who are doubly marginalized as women & as migrant workers effectively trapped by the kafala/sponsorship employment system.

Under the Kafala system, employers and recruitment agencies have the right to confiscate the passports of workers and make decisions that deeply affect their workers’ fates and well-being.