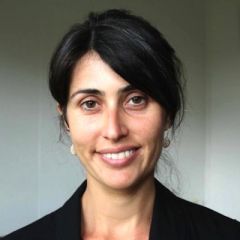 Samir, originally from Syria, sits inside his home in a makeshift Syrian Refugee Camp in the Bekaa Valley of Lebanon. Photo by Darrian Traynor. Used with permission.

“The camp is better now than it was,” Abu Iday told Global Voices. As the informal leader of a small gathering of Syrian refugees at Al-Rihaniya Shelter Centre in Akkar in northern Lebanon, Iday adds: “Although it’s still like a prison.”

Resettlement is the only hope for a better life for Lebanon's roughly one million Syrian refugees, but it often involves unpredictable waiting in dire circumstances.

While some electricity exists, refugees must collect water across the road and use communal toilets. Roughly 1,000 inhabitants live in makeshift tents provided by the United Nations High Commissioner for Refugees (UNHCR), despite living at the site for several years. Residents can theoretically leave the centre but they must pass through security checks.

Syrian refugees in Lebanon commonly experience this type of “Waiting for Godot” story. While most aspire to return to Syria, many have deserted from compulsory military service or have had previous run-ins with the current regime, which complicates the possibility of a return — even if the war ends.

Most Syrian refugees in Lebanon do not possess a security identification card, restricting their freedom of mobility despite the supposed benefits of UNHCR’s official policy on providing alternatives to refugee camps. In reality, many refugees do not receive aid without an official address and must pay extortionate rent for substandard accommodation or small plots of land to place their tents. Locations, where refugee families congregate (from a few up to hundreds), are known simply as “gatherings.”

A few years ago, families received rations of around 260,000 Lebanese British Pounds (about $175 United States Dollars-USD) per family, per month from the UNHCR. But the UNHCR’s funding reduced so drastically that refugees no longer receive cash, only a food parcel. Payment for medical care or gasoline for heaters (a necessity in the winter) must come from their own pockets. 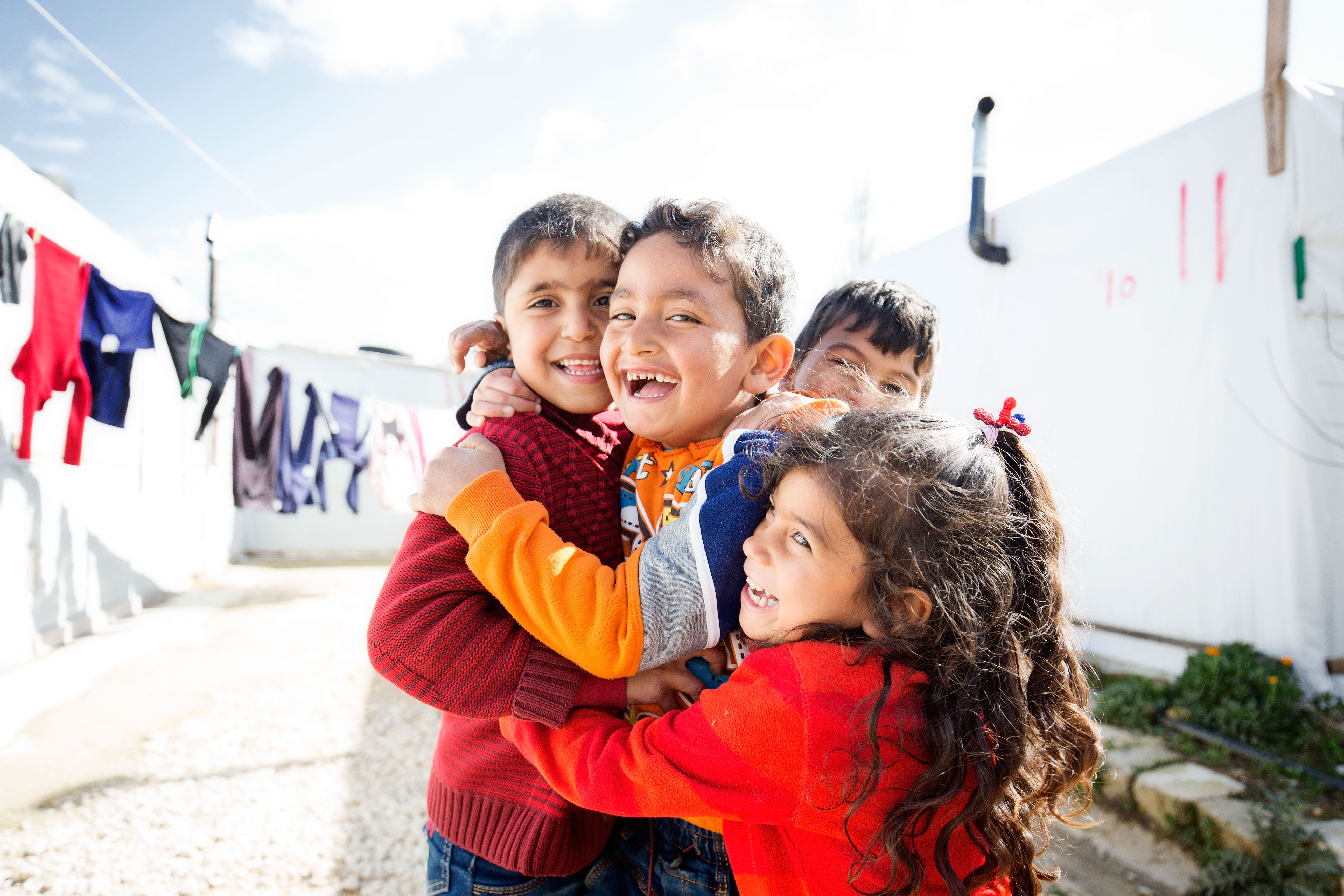 Children play in a makeshift Syrian Refugee Camp in the Bekaa Valley of Lebanon. Photo by Darrian Traynor. Used with permission.

Waiting for resettlement, one delay at a time

“We would go anywhere,” says Abu Adel, an Al-Rihaniya resident. Nearly 18 months ago, he and his family were invited to attend a resettlement interview by the UNHCR.

After two long days of interviews in the UNHCR offices in Tripoli where every detail of their lives in Syria was laid bare, the family was elated when authorities informed them that their story checked out and met all the criteria for resettlement in France.

After five months of waiting, Abu Adel finally received a call: “Apologies for the delay, but France did not accept your file.” Nearly a year later, the family is still under consideration for resettlement in other countries. 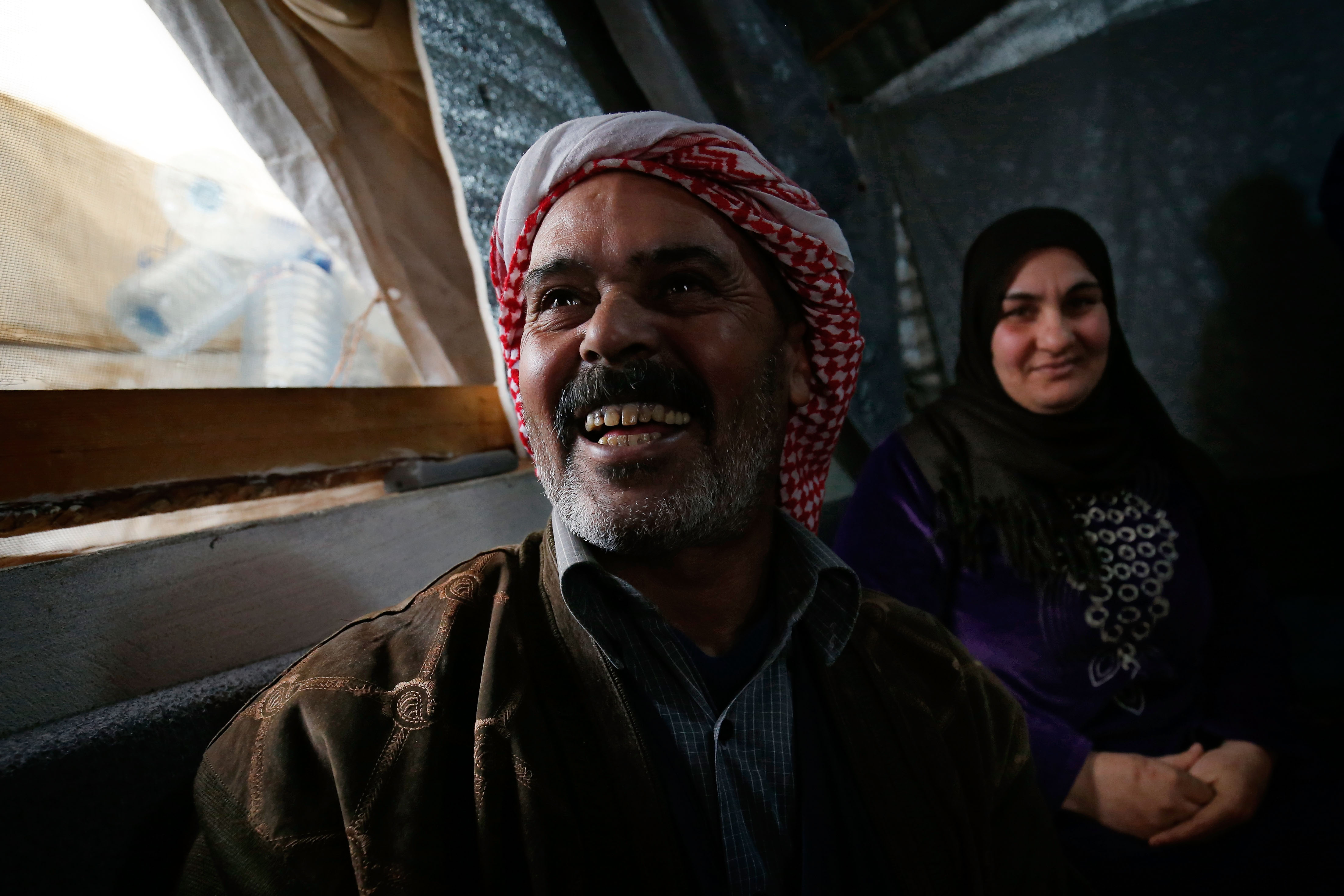 Abu Adel and his wife Umu Adel sit inside their tent in a makeshift Syrian Refugee Camp in the north of Lebanon. Photo by Darrian Traynor. Used with permission.

The resettlement process is often fraught with these kinds of vagaries.

Samir, originally from Hama, Syria, now lives in an informal gathering in the Bekaa Valley. On his wedding night in 2012, security forces of the government of Bashar al-Assad came to arrest him on suspicion that he was involved in the rebellion.

The soldiers took pity on Samir on his wedding night but warned that they would return the next day. After the nuptials, Samir and his wife Hiba fled to Lebanon. Almost five years later, in March 2017, the pair took part in a series of interviews with the UNHCR and also received approval for resettlement.

However, Samir has a 17-year old son from a previous marriage who lives with Samir and Hiba. As a minor, in order for the son to be resettled with them, Samir first needed to get approval from his son's mother who was also now a refugee living in the Zaatari camp in northern Jordan. Completing the paperwork proved too difficult.

A few weeks ago, Samir's son turned 18 and no longer needs his mother’s permission to travel. Samir and his family are hopeful that the UNHCR’s resettlement offer still stands.

Sara, an Iraqi refugee from Mosul also now living in Lebanon, tells a similar story about her brother Ahmed who was resettled in Australia about 18 months ago. Since then she’s been waiting in Lebanon to hear about her own family’s resettlement application under the family reunification scheme.

“Many people have been resettled,” she says. “We also applied to Australia but we’ve been waiting for over 18 months.”

A week ago, Sara heard that her brother received a rejection letter for her family’s application almost six months ago but because of his poor English, he hadn't properly understood the message.

Disappointed and frustrated, Sara is waiting to try again through another Australian government refugee resettlement channel – the revised Community Support Program (CSP). The program effectively makes refugees with valid claims pay for resettlement costing as much as $50,000 Australian Dollars ($36,500 USD) per person.

“The details of the revised CSP were meant to be finalised by July 2017,” said a staff member at the Brotherhood of Saint Laurence (an Australian-approved organisation accepting refugees), “but we didn’t hear any details about the program until March 2018.”

This delay prevented many refugees in Lebanon from applying elsewhere.

‘Hurry up and wait!’

Refugees like Sara, Samir, Abu Adel and thousands of others in Lebanon continue to ‘hurry up and wait’ in a series of delays and false promises.

Upon arrival in Lebanon, refugees feel pressured to register their status to begin the resettlement process only to wait for indefinite periods of time while highly bureaucratic procedures run their course.

Meanwhile, many refugees experience the hollow, infuriating emptiness of waiting that seems like a dark requirement of the resettlement process itself.