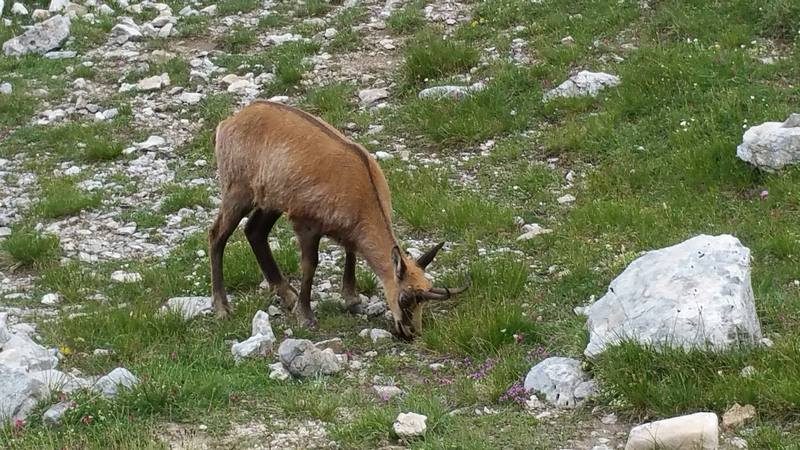 Grazing chamois in Pirin National Park: a rare and distant view, as these high-mountain animals fear nearby human activity. Photo by Miro Iv (2017), used with permission.

Protesters took to the streets in 29 international cities, accusing the Bulgarian government of corruption and violation of domestic and EU environmental law after it decided to allow further construction in Pirin National Park, a World Natural Heritage site.

In December 2017, the Cabinet passed a plan to allow construction activities in 48% of the park — a move that goes against legislation and is seen as a violation of its status as a protected space. After what many felt was the government's failed response to address the public outcry, environmentalists initiated an international outreach campaign in an effort to pressure authorities to uphold the law protecting the natural heritage site.

Pirin National Park was established to protect biodiversity in Bulgaria’s second highest mountain, an area considered to be one of the most well-preserved natural habitats in Europe. The park spans over 403 square kilometers (around 156 square miles) and contains breathtaking landscapes that range from rocky barren peaks to lush forests and glacier lakes to virgin rivers. It is home to numerous threatened flora and fauna species such as the golden eagle, brown bear and chamois. Locals tell stories that the Balkan lynx (an animal long thought to be extinct in the country) is still roaming in the park's territory. 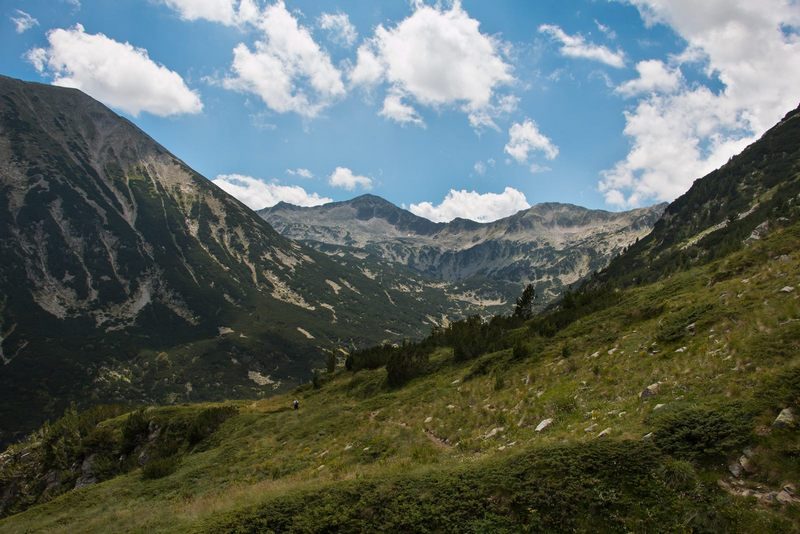 A tourist track within Pirin National Park. Old-growth forests in this pristine view are no longer protected from ski resort expansion. Photo by Yulian Nedelchev (2017), used with permission.

Due to its precious natural wonders, Pirin was declared a World Heritage Site by UNESCO in 1983. This status added to its world fame as a tourist destination, a trait valuable to many small and medium-sized businesses in the surrounding area. However, as the adjacent town of Bansko‘s ski resort began hosting winter sports competitions and attracting numerous foreign tourists with its low prices, the sporting complex started to rapidly expand in an unsustainable way.

Since 2001, the Bansko resort has expanded way over its allowed territory, funneling droves of tourists to the small town. Hotels, ski tracks and their supporting facilities have already encroached into the nearby national park by over 160 hectares, causing soil erosion, biodiversity loss and pollution to sources of drinking water. In 2010, UNESCO excluded the tourist area, spanning 0.6% of the park, from the World Heritage Site to become its buffer zone and continues to express concerns over the ski resort's expansion.

Due to the popularity of the area, Bansko ski resort has a huge accommodation base for a relatively small number of ski tracks and only a single gondola lift line, resulting in traffic jams and long queues of tourists waiting for their lift ticket. The unsustainable development of the ski resort has lead to a rapid increase and then drop in real estate prices. This financial bubble is growing as prospects of even more expansion become reality. In an effort to keep their prices up and sell more properties around Bansko, Ulen (the company that owns ski infrastructure) has spent years lobbying the Bulgarian government to expand concession areas in the national park and to lift restrictions on construction activities in the protected territory by amending its Management Plan (the ten-year framework of what is allowed within the park).

Bulgarian mainstream media, mostly owned by powerful oligarchs, downplayed the opposition from environmental NGOs by obscuring the issues of greatest concern by publishing stories which focus on issues that favor the resort such as the overloaded gondola lift line. Government officials backed this version by claiming the plan is being amended only to allow a second gondola line, although this is not actually mentioned in the actual legislation. The environmental minister unwittingly called the government's argument into question when he refused a change to the language which would specify that only one lift is allowed to be built, an amendment proposed by renowned altitude climber Boyan Petrov.

Mainstream media also focused on the economic benefits of development and income for the locals. Residents who members work in the concerned companies and their families expressed public support for the resort expansion, regardless of long-term effects on the environment.

Despite advice from environmental experts who warned against the development of a large ski area due to climate change and the predicted shortened winter season, the decision makers pressed on. Every year, the ski facility increasingly relies on snow cannons using local water supplies rather than on actual snowfall.

Despite the fact that new construction would downgrade the park's natural defenses against climate change, on its last session of 2017, the Bulgarian government expanded the territories open to construction from 0.6% to 48% of the park — including the zones set aside for the protection of forest ecosystems. Activists fear that this will open a gateway which will lead to the expansion of the ski area, threatening centuries-old forests with logging and further invasion of detrimental activities. 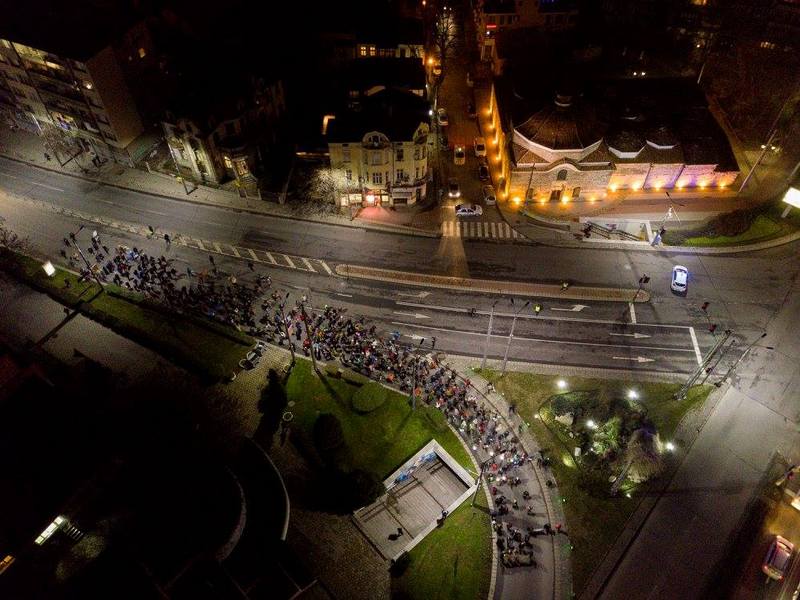 Citizens marching against the controversial amendment of Pirin National Park block a main street in Plovdiv, one of the 15 protesting cities on January 11th. Photo by Mitakis Fotos, 2018 [CC BY-NC-SA]

This decision has caused outrage in Bulgaria and thousands marched in protest in more than 20 major Bulgarian cities on January 4th, 11th and 18th this year — the greatest citizen mobilization since the anti-government protests of 2013. Protests also took place in 8 other European cities, and even as far as Sydney, Australia.

Prior to the controversial decision, the issue received international media attention:  The Guardian published an article, renowned Hollywood actor Jared Leto stood for Pirin, and The DiCaprio Foundation shared WWF's appeal to save the park which collected over 100,000 signatures. Earlier in 2017, UNESCO expressed concerns regarding Pirin's status as a World Heritage Site. Unfortunately, international pressure was not enough for the Bulgarian government to stand in protection of one of its three National Parks.

Alarmed citizens took to social media with the hashtag #SavePirin:

The oldest tree in Bulgaria. This rare pine grew for 1300 years in Pirin Mountain. It is as old as the Bulgarian state. Now the Bulgarian “patriotic” government insists on clearing of dozens new ski runs in this spectacular forest. #Bulgaria #savepirin #forest #trees pic.twitter.com/7rJEYoln9W

#SavePirin this is my home land full with the most amazing nature, full with miracles animal world. We people don't want everything to gone. SO this why today we are protesting. pic.twitter.com/FLDOxCmBI6

See you all very soon at the embassy (Mauerstrasse 11, 10117 Berlin) starting at 5pm. We're counting on you despite the whirling wind and the snowflakes. We'll do like the penguins to warm each other.

On your mark, get set, #SAVEPIRINhttps://t.co/y0s8lLhH7Q

If you're in BRUSSELS tonight – or LONDON, BERLIN, VIENNA, PRAGUE, HAMBURG, or OXFORD…

Get yourself down to a solidarity protest to demand preservation of Bulgaria's #nature in #Pirin national park & end to corruptionhttps://t.co/y6zIfsUEol#SavePirin #NatureAlert pic.twitter.com/OVIOHNfGUo

The protests also included action at the European Union level, in particular by the pan-European Green Party.

We stand in solidarity with the Bulgarian Greens @zelenite and environmentalists in Bulgaria and across Europe who are protesting against the government's decision to allow the expansion of a ski resort in the Pirin National Park ✊ #SavePirin @EU2018BG pic.twitter.com/en7e7VD6wO

As an indicator of the wide impact of this online debate, Bulgarian Prime Minister Boyko Borisov decided to respond to the Green Party's concerns via his Twitter profile. This prompted more reactions by Bulgarian citizens about the real meaning and consequences of the amendment:

No, it's not. You voted the text in. You should've read it first.

The protesters demand a withdrawal of the controversial decision and credible guarantees that park preservation and the rule of law will be protected — including the resignation of Environmental Minister Neno Dimov. Protests are planned for January 25th, with the expectation that new cities will join and demand protection for the park.