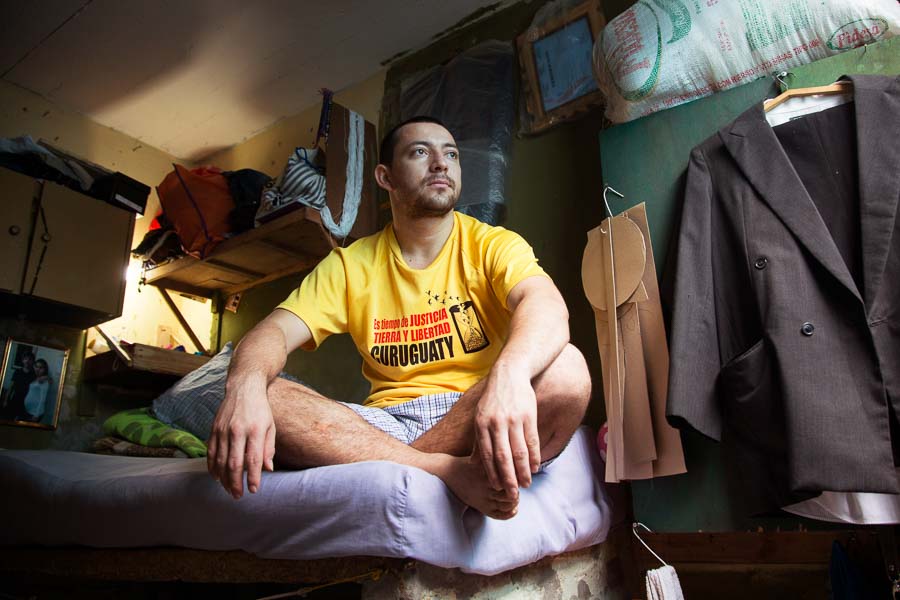 Before being imprisoned, Arnaldo Quintana worked the land with his mother and dreamed of being a football player. Foto: Santi Carneri. Used with permission.

There is a place in Asunción, Paraguay’s capital city, where 4,000 men live in a space designed for no more than 1,300. It is a place where damp pavilions hold men accused of assault, robbery, murder and drug trafficking alongside psychiatric patients and drug addicts. It is a place where shortages of food, water and electricity are commonplace. This place is the Tacumbú prison, where the fate of about 80 percent of its inmates is unknown because they have received neither trials nor sentences in Paraguay’s calcified justice system. However, in these walls, there are ten men who have received their sentence — the campesinos of Tacumbú. These men call themselves political prisoners and were condemned to the highest sentences prescribed by Paraguayan law, but the trials and the processes have been irregular and highly questioned.

Aside from their strict sentences, these campesinos (farmers) share many attributes: Their conduct is exemplary, they are widely respected by the rest of the prisoners, they all help teach the poorest prisoners, and they partake in daily tasks such as baking, cooking or carpentry. More importantly, however, they also share a common past: They were smallholder farmers in the rural departments of San Pedro, Canindeyú, and Caaguazú where they organized and led groups to defend land access and work for rural communities in the country with the least equitable distribution of land in the world — Paraguay.

Since the fall of Alfredo Stroessner's dictatorship in 1989, 115 rural community leaders have been killed in Paraguay and no one has been convicted for the murders. The country reached democracy but the power imbalances remained. The dictatorship years paved the way for today's inequality with policies that benefited the regime's machinery and their allies. As a result, the inequalities between peasants and landowners is abysmal (it is calculated that 2% of the population owns 85% of the land)

One famous example was the massacre of Curuguaty in early 2012, caused by a conflict over land rights in the department of Curuguaty. The case made a lasting impact in the country and even caused the impeachment of president Fernando Lugo. The details of the incident remain difficult to understand and the case drags in Paraguayan courts.

In the end, 11 peasants and 6 policemen were killed and the case became an emblematic example of the ways in which inequalities in land distribution and violence against peasants is spread in the country.

However, something else became evident: Curuguaty had seen a new form of repression coming to the fore. Land rights activists who aren't murdered outright are often silenced by Paraguay’s corrupt justice system. Between 2013 and 2015, 460 people were charged and 273 detained for land rights activism.

These cases are characterized by a disregard for the basic norms of due process such as preserving evidence and providing public defenders for the accused. The trials of the campesinos of Tacumbú were denounced by the European Parliament, the United Nations, Amnesty International, Oxfam, and Paraguayan organizations such as the Council of Indigenous Women and Farmers (Conamuri) and the Catholic church. 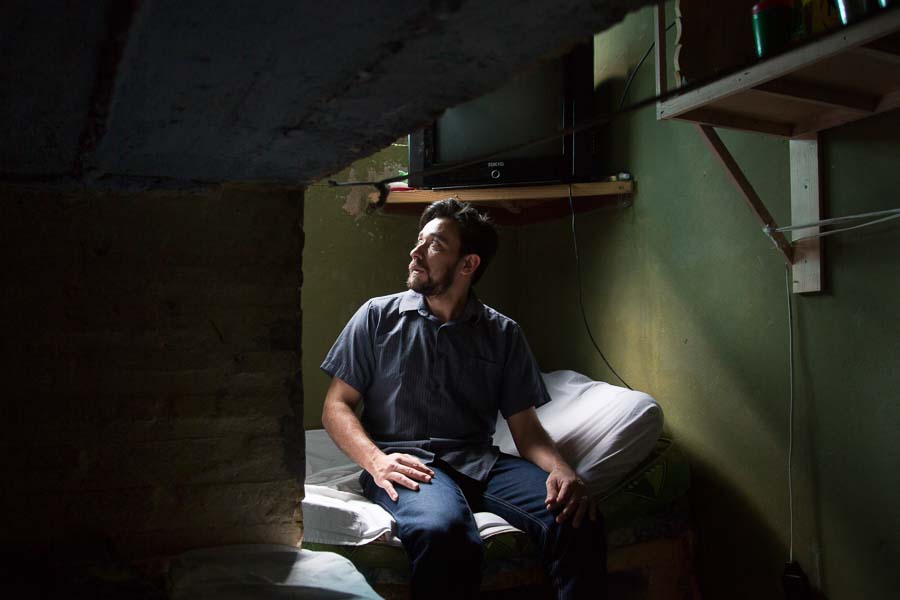 Néstor Castro was shot in the jaw during the Curuguaty Massacre and condemned to 18 years in jail. His brother was killed during the shooting. Photo by Santi Carneri.

Condemned to struggle for justice

According to Amnesty International, prisoners of conscience are those who “without having used violence or promoted its use are jailed … because of their beliefs, their ethnicity, sex, color or language.” In cases where prisoners have committed violent acts, the organization demands fair trials. 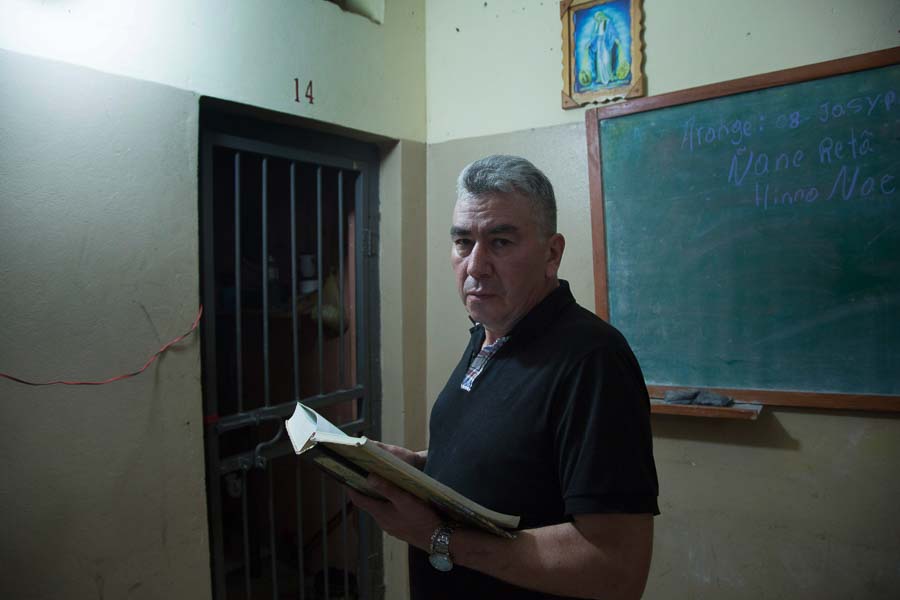 In Tacumbú, Arístides Vera teaches Guarani classes. His trial was conducted entirely in Spanish, which is not his native language. Photo by Santi Carneri.

The lawyer and general secretary of the Paraguayan Council on Human Rights (CODEHUPY) Óscar Ayala Amarilla says that the sentence of several of the prisoners depended on the testimony of a single person who had made contradictory statements. “They are condemned on the basis of a single testimony, which is a minimal piece of evidence without other documentation,” he says. “It’s controversial because it doesn’t achieve the standard of evidence necessary to condemn anyone in a normal judicial process.”

In the case of Curuguaty, the prosecution did not demonstrate that the shots that killed police officers were fired by the accused or even that they carried the weapons. In addition, the deaths of the farmers killed during the massacre were never investigated.

Rubén Villalba, condemned to 35 years in jail for the massacre, maintains that there is no proof to convict the campesinos of Tacumbú and criticizes the lack of investigation into the deaths of the farmers. “It was the politics of the oligarchy, the transnational companies. They killed us.”

Some of the other imprisoned campesinos were convicted for the kidnapping and murder of Cecilia Cubas in 2006. The case made waves in the country, as Cubas was the daughter of the ex-president Raúl Cubas and the kidnapping was tied to the rebel group known as the Paraguayan People's Army (EPP in Spanish). However, according to those serving time in prison, their judicial process was unfair and very much connected to their political activities. 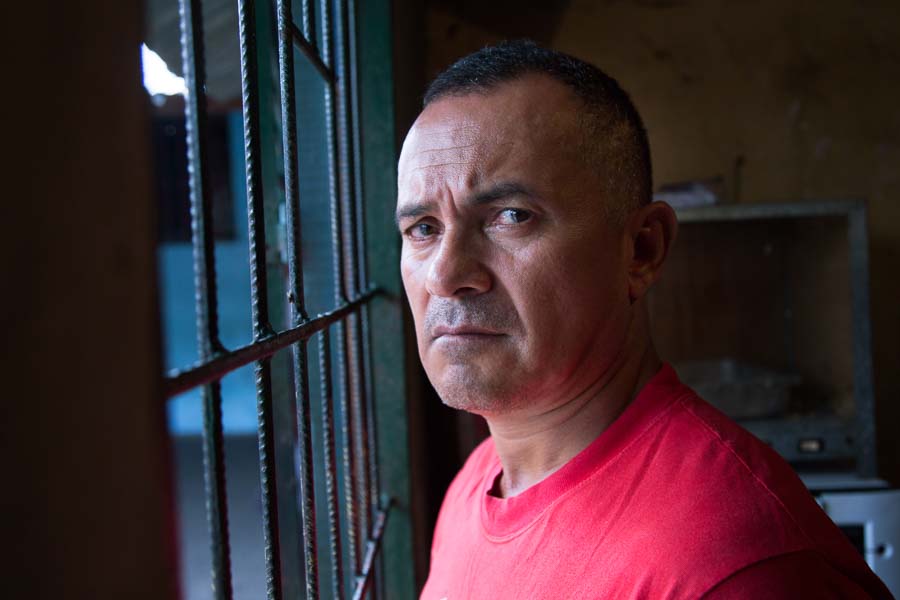 “I’m a farmer, a worker,” says Rubén Villalba. Before jail, he lived on tierras malhabidas, disputed property that should have been destined for land reform. He was sentenced to 35 years in prison in the Curuguaty case. Photo by Santi Carneri, used with permission.

Óscar Ayala, the human rights lawyer, agrees that the imprisoned farmers cannot be categorized as common prisoners. “We’re talking about people who have played and continue to play a key role related to rural activism and social justice, and this distinguishes them from any other prisoner.”

Margarita Durán Estragó, a historian, researcher and activist, missed only two sessions during the Curuguaty trial and document its flaws in a well-worn notebook. She believes the prosecution planted evidence and hid information to incriminate the farmers. “They accused the civilians and did not investigate the police. They even stopped the autopsies.”

For these prisoners in Tacumbú, the passing days slowly accumulate. They spend their time in the prison hallways, playing soccer and doing chores. As they wait for slow justice, they relive their past with activists and foreign journalists who visit to bear witness to their story.

After ten years behind bars, the six prisoners convicted for kidnapping Cecilia Cubas, published a group autobiography. In it, Aristídes Vera summarized his dream, a dream that sent him to jail just like the other campesinos of Tacumbú. “My origin is farming,” he wrote, “My dream of freedom is that the rural poor could have land, houses, health, education, and access to good roads to get their products to market. Liberty, for me, is that all men and women have the possibility to work and live with dignity. For this, I have fought all my life, and for this, I have been imprisoned. I am a political prisoner.”