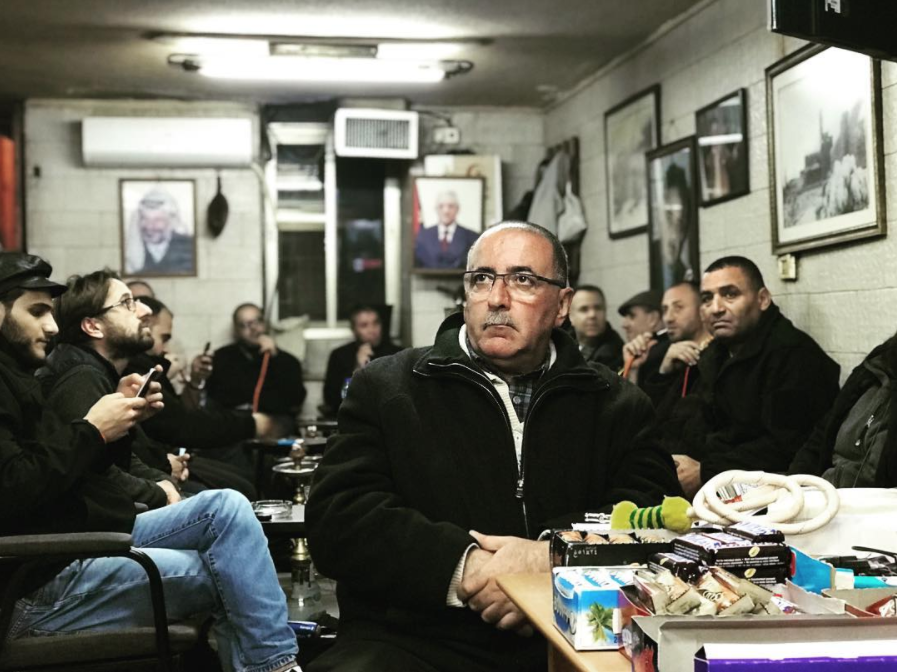 Palestinians watch Trump's speech on the news on December 6, 2017. Photo taken by Mariam Barghouti on Instagram and re-used with permission. Original caption reads: Watching Trumps speech. Face explains it: a little bit of mental cursing and a little bit of this is nothing new mixed with lament and meh.

US President Donald Trump's declaration that the country would move its embassy in Israel to the city of Jerusalem was met with shock throughout the world. Among Palestinians, however, it was outrage mixed with a distinctive lack of surprise.

Jerusalem is a controversial site of contention in the so-called Israeli-Palestinian peace process for the simple reason that both the State of Israel and the State of Palestine claim it as their capital. Under international law, East Jerusalem is considered to be occupied Palestinian territory — Israel captured the city, previously under Jordanian rule, during the 1967 Six-Day War — and all embassies to Israel, up until this recent development, were located in Tel Aviv.

Palestinians living in the city have long experienced discrimination under Israeli control. According to the series entitled “A City for All?” produced by the collective Visualizing Palestine, as of October 2017, 10,000 Palestinians born in Jerusalem “have no legal status because their parents hold different ID cards“. Despite being 37% of the current population of Jerusalem, Palestinians have received only 10% of the city's budget for their neighborhoods.

And between 2004 and 2016, “685 Palestinian homes in East Jerusalem were demolished…leaving 2,513 people homeless. Home demolitions are part of a broader Israeli policy to alter the demographic and geospatial makeup of Jerusalem, privileging Jewish settlers over the indigenous Palestinian population”: 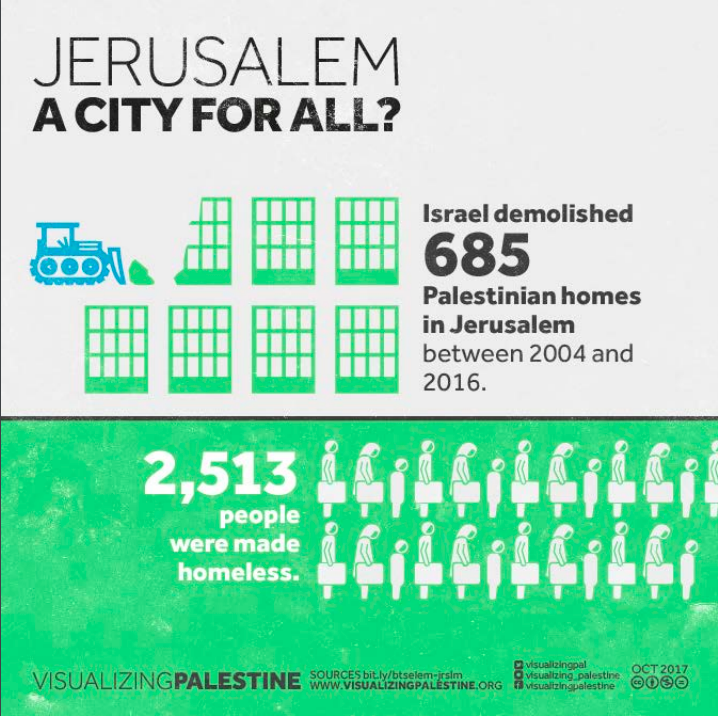 “685 Palestinian homes in East Jerusalem were demolished between 2004 and 2016, leaving 2,513 people homeless. Home demolitions are part of a broader Israeli policy to alter the demographic and geospatial makeup of Jerusalem, privileging Jewish settlers over the indigenous Palestinian population.” Caption from Visualizing Palestine. Used under a Creative Commons license.

Jerusalem is a microcosm of the treatment that Palestinians face across the territories. Throughout Israel's 50-year occupation of the West Bank and Gaza Strip, human rights groups, international organizations and governments have blasted Israel for human rights abuses, ranging from unlawful killings and forced displacement to discriminatory policies toward Palestinians.

With the US embassy decision, politicians across the world offered their rebukes. Turkish President Recep Tayyip Erdoğan, for example, declared that “Jerusalem is a red line for Muslims“. But over the years, condemnations haven't translated into any concrete change, especially when large sums of trade money with Israel have been on the line.

As for the US, Palestinians have long argued that the country's policies reflect an unmistakable pro-Israel bias. Despite the US claiming to be a neutral actor, its record at the United Nations, where it has used the veto in support of Israel several times (full list by the Jewish Virtual Library here), as well as the large amount in aid and weapons it sends to Israel every year (the most recent package in 2016 worth $38 billion over the course of a decade), speak for themselves.

In fact, so common was it to expect the US to use its veto in support of Israel that the Obama administration's 2016 decision to abstain from using it in a resolution condemning Israel's construction of settlements on Palestinian territory — declared illegal under international law — made headlines.

‘Who is America to declare the capital of Israel when it's Palestinian land?’

This perhaps explains why, while definitely outraged, Palestinians reacting on social media were not necessarily surprised by the US move.

At the time of writing, at least two Palestinians were killed and over 200 were injured during protests opposing the Jerusalem decision across East Jerusalem, the West Bank and Gaza. Israel launched at least one airstrike on Gaza, injuring at least 25 civilians.

Linah Al Saafin, a Palestinian producer at Al Jazeera, shared this image of a 14-year-old Palestinian boy being arrested by Israeli soldiers in Hebron, West Bank:

How many Israeli soldiers does it take to arrest a 14 year old Palestinian boy?
Photo taken yesterday in Hebron h/t @shejae3a pic.twitter.com/1eNM3CmfG8

Mariam Barghouti, a Palestinian activist and commentator who was herself arrested at the age of 20 by Israeli forces, wrote in an Al Jazeera op-ed that the US administration's announcement did not happen in a vacuum:

It's a culmination of international failure to address Israeli human rights violations, perpetual US support to Israel, the incompetency of Palestinian leadership to achieve any solutions through diplomatic efforts, and more recently the new friendship the US administration is building with some Arab states.

She also denounced the focus of much of the mainstream media on “reaction from Palestinian and Arab states” rather than the very rights of Palestinians continuously violated:

Ya'll the issue to Trump declaring #Jerusalem the capital of Israel should not be the fear of reaction from Palestinians & Arab states,rather the fact that an international administration is once again ignoring Palestinian existence and right to self determination. #Palestine

Barghouti finally pointed out that 2017 is the centenary of the Balfour Declaration, referring to a 1917 public statement issued by the British government during World War I announcing support for the establishment of a “national home for the Jewish people” in Palestine:

A Palestinian man tells me as I interview him: “Who is America to declare the capital of Israel when it's Palestinian land?”

We're marking 100 years of Balfour with another manifestation of it by @realDonaldTrump. #Palestine #Jerusalem 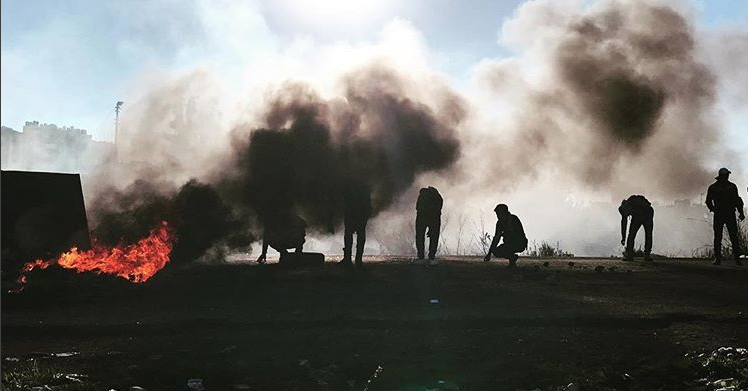 In a long status, Palestinian-Syrian journalist Eyad Hamid said that moving the embassy does not make much of a difference as it'd be akin to moving it from one occupied city, Jaffa, now part of Tel Aviv-Yafo where the current embassy is, to another, Jerusalem. Here is a brief extract:

Jerusalem-born and raised Leen Barghouti, who is currently a consultant to the Palestinian mission in Berlin, and previously a researcher at Georgetown University, viewed this as yet more proof of the Israeli government under President Benjamin Netanyahu isn't interested in peace:

There are not enough words to describe what on earth happened yesterday to my hometown Jerusalem, however it is clear the Israeli government is not interested in letting go of its domination, suppression and superiority. It is not interested in peace. Netanyahu's idea of peace is Palestinian servitude and submission. The US administration is basically rewarding theft, oppression, repression, violence and humiliation.

She then called on Palestinians to unite:

It's time now to unite and fight for our equal civil, cultural, religious and political rights. It's time to break our chains and retake our heritage that was stolen from us, it's time to fight for what is right rather than what is comfortable.

Palestinian analyst Yousef Munayyer said that it's a lose-lose situation for Palestinians:

If Palestinians respond to Trump's announcement with anger in the streets we will be told: see, who can make peace with those violent Arabs.

If they don't we will be told: See, the Jerusalem decision was the right move.

Both of these are wrong.

Palestinian writer Budour Hassan said that it's only natural for “a nation like the U.S. that has been built on colonization…to support another colonizer state in Israel”:

She added that official “anger” at the announcement is meaningless unless there's real action on the ground from Palestinians:

The Israeli government hasn't wasted much time since the announcement, with 14,000 new housing units planned for Jerusalem, including 4,000 across the “Green Line”, i.e. in the legal territory of the State of Palestine: