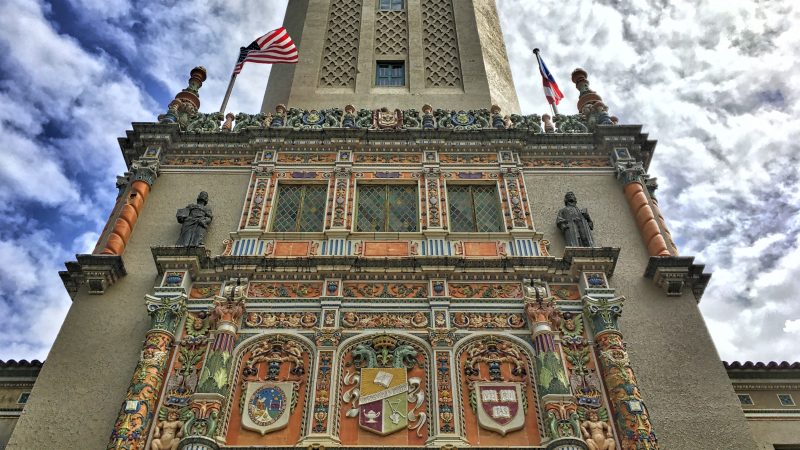 Long before hurricanes Irma and María utterly devastated Puerto Rico in September 2017, the most important public higher education institution on the archipelago was weathering a storm of its own: austerity. And some are now sounding the alarm that these natural disasters have given authorities an excuse to push through even more draconian measures at the University of Puerto Rico.

Puerto Rico, a US territory, currently struggles under the weight of a $74 billion debt, and $49 billion in pension obligations, the likes of which are a product of a decades-long recession, illegal bond issuances and trades, and an overly advertised tax haven. The legal framework that made these practices possible and established Puerto Rico as an exception to the US tax code was enacted by the US Congress. This has lead many to argue that Puerto Rico’s debt is inherently colonial.

To try to deal with Puerto Rico’s financial crisis, US lawmakers passed legislation called PROMESA, which, among many things, created an unelected oversight board and a process for restructuring the debt. President Barack Obama signed the bill into law in June 2016, and thus, the Fiscal Control Board was imposed on Puerto Rico — with very little say from the people of Puerto Rico, who, despite being US citizens, do not have voting representation in US Congress and cannot vote for president.

The Fiscal Control Board's reign has been characterized by austerity, and the University of Puerto Rico (UPR) figures among the public institutions it has singled out for steep budget cuts, campus and academic program eliminations and consolidations, tuition spikes, and payroll reductions — recommendations that UPR's administration and the local government seem largely intent on following. With rumors regarding the privatization of Puerto Rico's Electric Power Authority (PREPA) making their rounds as well, fear emerged that UPR could eventually head in the same direction.

A considerable portion of UPR's student body and faculty, however, were resisting these measures, a two-month-long student strike earlier this year an example of this struggle.

But then hurricanes Irma and María hit the archipelago with tremendous force, and the UPR campuses, all 11 of them, suffered considerable damage. After hurricane María, UPR assessed more than $118 million in losses system-wide; UPR-Humacao registered as the campus that suffered the most devastation, having been the closest to the area through which the eye of the hurricane entered Puerto Rico. Between hurricanes Irma and María, all campuses were closed for almost a month to more than five weeks.

Before UPR decided to reopen its campuses, a number of universities stateside, such as Tulane University and Brown University, as well as private universities in Puerto Rico, started hurricane-relief programs, offering students an opportunity to continue their academic semester and studies. When UPR finally reopened, campuses were still plagued by fungus infestations, power outages, non-potable water service, closed libraries and research centers, and damaged classrooms, offices and public spaces.

This combination of forces could represent a problem for UPR: it could lose a significant portion of its student body, and that could put UPR at greater risk than before of falling victim to what Canadian journalist Naomi Klein calls the shock doctrine: a “brutal tactic of using the public’s disorientation following a collective shock […] to push through radical pro-corporate measures”. Faculty members, like professor Maritza Stanchich from UPR-Río Piedras, argued as much on Facebook:

OJO, while perhaps for some this is well-intentioned, initiatives to offer students in hurricane-affected areas in-state tuition in states such as Florida might also embolden further shock-doctrine-style shake ups at UPR. Tulane, after all, was not in the same boat, so to speak, pre Katrina. Entiendo el impulso positivo de estas iniciativas estudiantiles, pero creo que sería ingenuo pensar que no se podía utilizar de manera nefasto para la UPR. [Editor's note: This was a public Facebook post uploaded on September 29, and there have been many exchanges about this since.]

CAREFUL, while perhaps for some this is well-intentioned, initiatives to offer students in hurricane-affected areas in-state tuition in states such as Florida might also embolden further shock-doctrine-style shake ups at UPR. Tulane, after all, was not in the same boat, so to speak, pre [Hurricane] Katrina [which devastated the US Gulf Coast in 2005]. I understand the positive intention of these student initiatives, but I think it would be naive to think that they couldn't be used in a disastrous way for UPR. [Editor's note: This was a public Facebook post uploaded on September 29, and there have been many exchanges about this since.]

UPR found itself in a lose-lose situation. It could decide not to continue with the semester because proper recovery would take time, but watch as a portion of its student body was snatched away by universities stateside and by private universities and colleges on the island itself. Or it could decide to reopen (which it did), but watch a portion of its student body leave anyways, due to the fact that the university hadn’t (and hasn't) been fully and properly rehabilitated.

But in the view of many students and staff, the hurricanes only exacerbated the situation. UPR was already in trouble thanks to years of corrupt and inept government administrations and the debt crisis, as Verónica del Carmen, a student from UPR-Río Piedras, noted:

I'm not registered at the university this year, so I don't have to go back on Monday. But I read you, I hear you, and I feel anxious, sad, nervous… But mostly, I feel pissed, because if I were registered I'd have to choose between working or studying. Between eating or taking the bus. I would probably be planning with friends which would be the shelter with water and the best space that we could go to rest and “study”. I think of the possibilities and get even more pissed. Both the government and the university's administration have more than enough excuses to continue the privatization of UPR and the access to education. Hurricane María's passing paved the way for them to finish implementing their plans. Closing campuses, increasing the cost of tuition, cutting grants and financial aid, letting buildings and student residences fall into ruin, in other words, that the UPR can only be for those who can afford it.

‘They're taking advantage of the tragic moment’

Recently, UPR’s Governing Board instructed that all deans should review all academic programs with the intention of substantially reducing the number of required credits, and present curricular alternatives so as to offer two-year programs of study (associate degrees).

At UPR-Mayagüez, where the rector was quick to implement the board's resolution, professor Jorge Schmidt and many other faculty members worry the decision prioritizes profit over academic excellence, and would debilitate UPR’s role as a leading academic and research center:

They're taking advantage of the tragic moment the country is going through to neutralize any possible opposition to their anti-academic measures that intend to convert UPR into a training center for technical jobs.

UPR is the most important public higher education institution in Puerto Rico. A total of 46.1% of the population lives below the poverty line (and the numbers will increase post-hurricane María), and economic accessibility is already a problem for many who study at or want to attend the University of Puerto Rico. If UPR is privatized, a considerable sector of the population may find that they no longer have access to an affordable education on the archipelago.