After Years of Cultural Appropriation, Mayan Weavers Want Legal Protection for Their Heritage 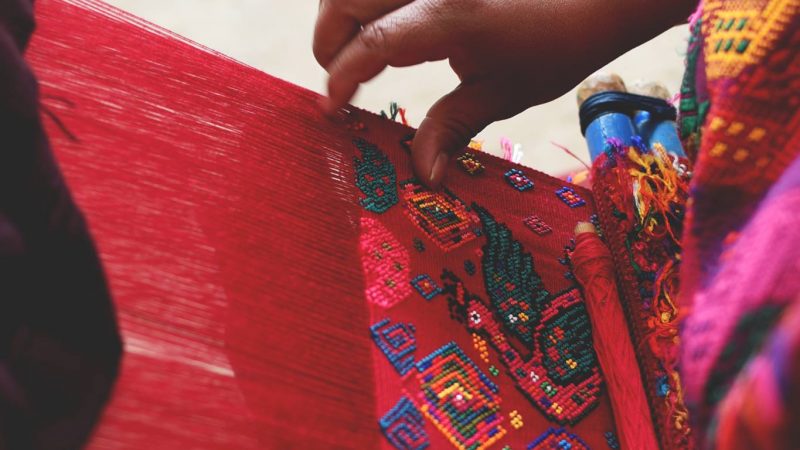 “The Guatemalan Maya have endured the theft and co-optation of their textiles for years, both from foreign corporations and domestic non-indigenous designers.” Photo taken at the Ut'z Bat'z collective by Julie Houde-Audet. Used with permission.

In 2011, Alejandra Barrillas, Guatemala’s entrant in the Miss Universe pageant, appeared on stage bedecked in what in the eyes of the rest of the world—and perhaps some Guatemalans as well—looked like perfectly appropriate Guatemalan indigenous attire. Guatemala’s indigenous Maya community, however, were outraged. As it turns out, the outfit worn by Barrillas on the direction of Guatemalan designer Giovanni Guzmán was a form of indigenous ceremonial clothing reserved exclusively for male elder leaders.

The Guatemalan Maya have endured the theft and co-optation of their textiles for years, both from foreign corporations and domestic non-indigenous designers. The community has a bone to pick, for instance, with designer Alida Boer, founder of Maria’s Bags, who uses Maya Indigenous designs without permission and sells her products online for upwards of US$600.

The Guatemalan government, meanwhile, has done little to protect the textiles and designs of their indigenous community; there is even a loophole in the country’s Intellectual Property Rights laws that excludes the intellectual property of the Maya. Yet this hasn’t stopped the government or the state tourism organization, Inguat, from using indigenous textiles and handicrafts to promote tourism. This behavior goes hand in hand with the overall neglect of the indigenous Guatemalans, who make up approximately 40 percent of the population but account for 80 percent of the country’s poor. 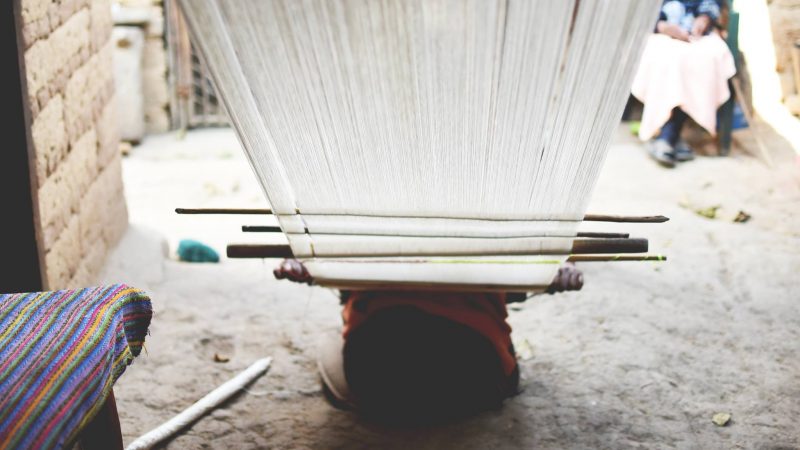 “They call for tourists to come to the country and they use us as bait. Our clothes, our culture, our work, but none of the money they make is returned to the Indigenous communities. This is what we’re denouncing with the patent.” Photo taken at the Ut'z Bat'z collective by Julie Houde-Audet. Used with permission.

Guatemala's Maya community also still live under the shadow of the Guatemalan Civil War that raged between 1960 and 1996 and massacred or disappeared 200,000 indigenous Mayas. Approximately 83 percent of the people killed during the war were Maya, and countless others were victims of human rights violations committed primarily by the Guatemalan government and the military. High-ranking members of the government at that time have since been accused of war crimes, including the former head of state, Efraín Ríos Montt, who was charged with genocide.

“They treat us like things and not like human beings,” says Angelina Aspuac, a weaver and spokesperson for the Women's Association for Development of Sacatepequez (AFEDES), “They call for tourists to come to the country and they use us as bait. Our clothes, our culture, our work, but none of the money they make is returned to the Indigenous communities. This is what we’re denouncing with the patent.” 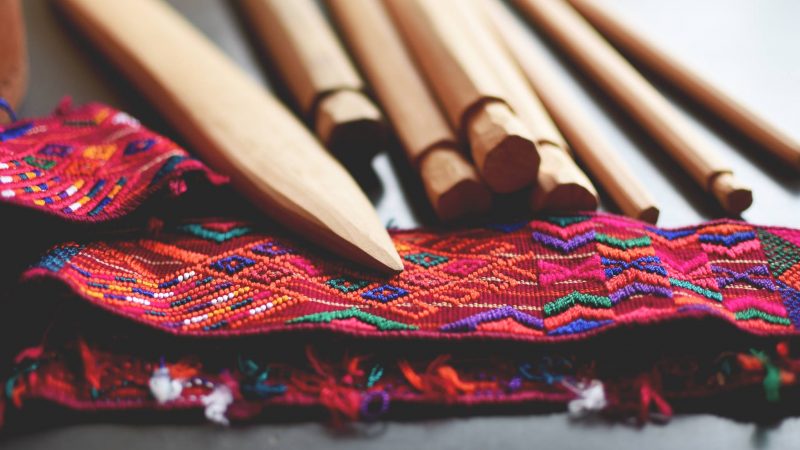 “The Maya weavers argue that, as artists, their crafts should be recognized as intellectual property.” Photo taken at the Ut'z Bat'z collective by Julie Houde-Audet. Used with permission.

The patent Aspuac is referring to is the centerpiece of a campaign launched in May 2016 by Maya weavers in Guatemala to take back their cultural heritage. A group comprising 30 organizations from 18 linguistic communities in Guatemala and headed by AFEDES, have filed a legal action before the country’s Constitutional Court. The Maya weavers argue that, as artists, their crafts should be recognized as intellectual property. The action claims that it is unconstitutional to exclude Maya textile creations from protection under Guatemalan intellectual property laws.

“As of right now there are no such articles protecting the collectivity of creation, and our work is not being valued,” says Aspuac, “Rather, there has been an appropriation and a commodification of the culture and the designs.”

Aspuac says that royalties received as a result of the patent would be divided among the community. The community will designate representatives to negotiate on their behalf with companies seeking to use their designs, and manage the distribution of funds back into the community. Aspuac and other leading members of the movement want to see the money invested in social projects like weaving schools and education for women and children. 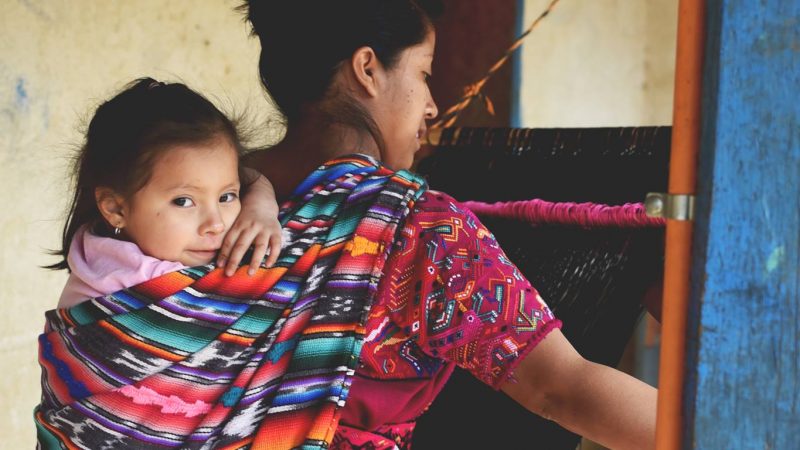 Photo taken at the Ut'z Bat'z collective by Julie Houde-Audet. Used with permission.

The hope is that with the patenting of their textiles and designs, the Maya community would have more autonomy and control over their heritage and culture, thus alleviating two of the major hardships the community faces: cultural appropriation and dispossession. Royalties received from the patent would also give the communities the chance to end a long-standing cycle of poverty.

The Maya Weavers are not alone in their struggle. In 2015, members of the Tlahuitoltepec community in Oaxaca, Mexico, accused French designer Isabel Marant of plagiarizing a 600-year-old Tlahuitoltepec design. In 2012, the Navajo Nation in the United States filed a lawsuit against Urban Outfitters for using their name in a number of products, including “Navajo hipster panties” and “Navajo print flask.” The prevalence of this kind of cultural appropriation and plagiarism led 189 delegates from indigenous communities from around the world to gather in Geneva in June 2017, and convene a special committee within the World Intellectual Property Organization (WIPO) to ban the appropriation of indigenous cultures around the world.

Perhaps most importantly for the Maya community, a patent would be an acknowledgement of the of the significance and value of their work. Maya textiles and clothing traditions, especially the huipil, a handwoven garment worn by Maya women, have a profound meaning to the weavers.

“You never make a huipil just because,” says Lucía, a Maya weaver in the Chichicastenango women’s cooperative Ut’z Bat’z. “They all have significance. For example, in Quiche, the designs have serpents, because they have curves like the curve of an M which also signifies the mountains where our ancestors were able to climb up and see their surroundings. The neck represents the sun, and the corners represent the four cardinal points.”

As Ambrocia Cuma, a Maya weaver and professor who teaches at Tulane University, puts it, “the huipiles for me are an identity. They are a trove of knowledge because they represent the everyday conversations of woman with nature.”