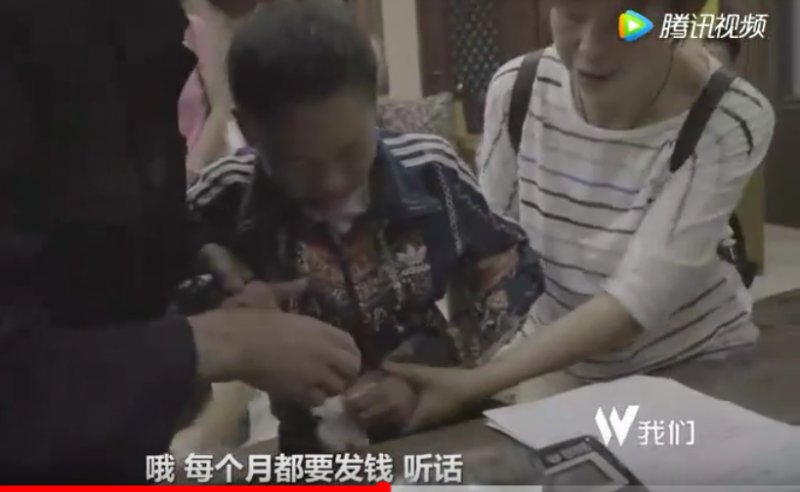 An adolescent was forced to sign a document ending his training at a fight club and sent back home. Screen capture from Beijing News video.

A video of underprivileged adolescent mixed martial arts (MMA) fighters duking it out in a ring, with a large crowd cheering them on, recently went viral on the Chinese web, triggering widespread debate about the morality of recruiting vulnerable children to take part in a violent sport.

In response, government officials — seemingly to save face — yanked some of the children from the club without prior warning, leaving the boys in tears and Chinese netizens worrying about the young ones’ futures.

The original report, entitled “MMA orphans: If you don’t fight, then you can go back home and eat potatoes,” was produced by online media outlet Pear Video. It shows a number of boys between the ages of 12 and 14 fighting. Some of their faces are bloodied.

They belong to EnBo Fight Club in Chengdu, Sichuan Province, founded by a man named En Bo, who used to serve in the Chinese Armed Police Force and won two championships in a district army fighting match.

The video reports that EnBo Fight Club takes in about 400 children of the Yi people, an ethnic minority from Liang Shan Autonomous Prefecture. Rates of drug abuse, HIV and poverty are high in the region. Most of the EnBo children have lost either one or both of their parents, and would have to work hard labor at home.

In the club, they eat foods that might not otherwise be available to them, like beef and eggs. One of the employees from EnBo mentions that the children earn some money from their commercial fights; the money is managed by the club and is given to the children when they need it.

One of the children says that even though the training is hard sometimes, life in the club is much better than back in his hometown. His ultimate dream is to win the UFC (Unlimited Fighting Championship), which comes with a gold belt.

Starting such intense fight training when they are only adolescents will probably cause permanent damage to their bodies in the future.

This is also a good way out to a brighter future, much better than growing up deep in the mountains and then trying to go to the city.

Letting the kids be trained to participate in underground combat and to entertain the gamblers, this is the right path? My god!

How comes starting young in ping pong, gymnastics, or basketball aren’t considered bad for your future, but training to be a fighter is believed to lead to no future, that it can only teach physical fighting and become a hidden danger for society?

‘Is the government’s face more important than the kids?’

Following the attention, on August 17 local authorities from Liang Shan county in Sichuan province stepped in. They pulled some of the children from the club, took them back home, encouraged them to focus on their studies, and promised 748 yuan per month (112 US dollars) as a monthly stipend for those living in extreme poverty.

But club founder En Bo wasn't hosting and training the children without the government's knowledge. He says some government officials from Liang Shan contacted him and sent him the first batch of students. Later more arrangements of the same nature were made.

Some of the criticism centered on the children being deprived of the opportunity to receive China's nine-year compulsory education. En Bo explained to Beijing News that he tried to enroll the boys in schools in Chengdu, but was asked to pay 30,000-50,000 yuan (about 4,500-7,500 US dollars) per child for fixing their local residential permits. Eventually, he decided to start his own night school in the club by hiring four part-time tutors to teach Chinese and math.

During the interview, the fight club founder choked up when talking about the children having to leave. Below is the full video report of their last day in the club:

Beijing News interviewed a number of the boys, who were in tears when they learned it would be their last day. The video showed children being forcibly dragged away from the club, triggering another heated online debate, but this time, public morality and local government authorities were the subject of scrutiny:

This is the saddest video I’ve seen this year! An outcome of collective vice in the name of “kindness”!

[Imagine] your parents are drug addicts, gamblers or have vanished. In the mountains, you are always starving. One day, a top-level sports club in the city takes you in without asking you for a training fee. It gives you food and Nike sport shoes, provides you with the world's top trainers. You have teachers and friends and have developed a sense of confidence… suddenly, everything ends and you have to return to the mountains. If I were in that situation, I might kill myself.

Is the government’s face more important than the kids?

When you forcefully took the kids away, did you consider what they think? You are just putting your own desire above the kids, and believe that it’s the right thing to do.

En Bo should use this opportunity to advertise the fight club, if it’s the right road you should keep going! MMA is a very good sport!

Discussions will surely continue, and we can only wish the children all the best in their future.