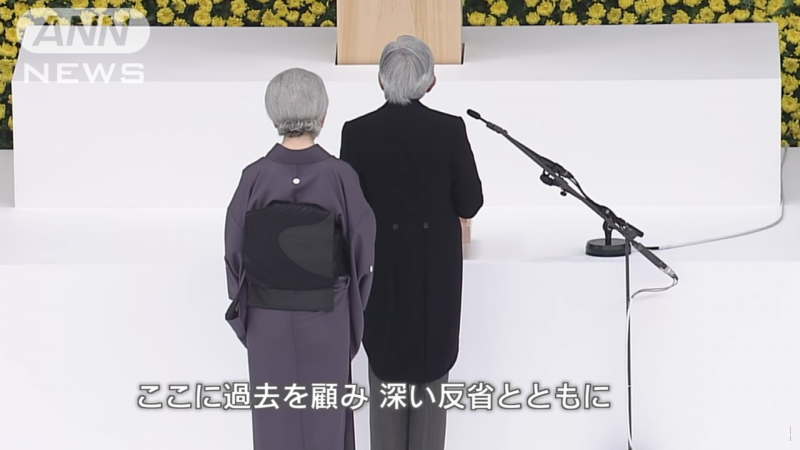 “Reflecting on our past and bearing in mind the feelings of deep remorse (I earnestly hope that the ravages of war will never be repeated).” Japanese Emperor Akihito, with Empress Michiko, addresses Memorial Ceremony for the War Dead on August 15, 2017. Screencap from ANN official YouTube channel.

August 15 marked the 72nd anniversary of the end of the Second World War. On the occasion, Japan remembered the 2.3 million Japanese military personnel and military employees and 800,000 Japanese civilians who died between the start of the Second Sino-Japanese War in 1937 and the end of World War II in 1945.

Japan's annual commemoration of the end of the war shows that, seven decades on, there is no clear political consensus in Japan about how to remember the war. Some remember the 3.1 million dead while seeming to avoid the context of the war in which they died, while others are committed to preserving the memory of how destructive war can be, and the need for Japan to continue to embrace pacifism.

More than 6,200 people attended a memorial service at the Nippon Budokan sports arena in Tokyo, which featured remarks by Prime Minister Abe Shinzo and Japanese Emperor Akihito. Abe's words were notable in that he did not express Japan's guilt for starting the war, while the emperor expressed feelings of “deep remorse” for the war, for the third year in a row.

Neither made direct reference to the war dead in other countries.

Full remarks made by the Emperor at the Memorial Ceremony for the War Dead: http://www.kunaicho.go.jp/page/okotoba/detailEn/14#92

Meanwhile, thousands of people traveled to Yasukuni Shrine and neighboring Chidorigafuchi National Cemetery in Tokyo to pay their respects to the war dead. Yasukuni Shrine is controversial for many people across East Asia since the shrine memorializes, among others, convicted Japanese war criminals. As well, swords forged at Yasukuni were used in the battlefields across Asia between 1933 and 1945.

The 72nd anniversary of the end of the war. On assignment, I traveled to Yasukuni Shrine and Chidorigafuchi National Cemetery. As a light rain fell, a long line of visitors stretched through the muggy precincts of Yasukuni Shrine.

Meanwhile, protesters and other groups congregated outside of Yasukuni. According to Sankei Shimbun newspaper, the groups were demonstrating against attempts to revise Japan's “peace Constitution” as well raising awareness about a variety of issues, such as Taiwanese independence.

Due to the crush of Yasukuni visitors and the sheer number of protesters and other groups nearby, Tokyo police erected barricades to control the crowds.

Elsewhere in Tokyo, other groups marked the day by coming out in support of Article 9 of Japan's Constitution, in which Japan renounces war and which the Abe government is seeking to revise or even abolish.

At 5 p.m. we will met at Zōshiki Station to reaffirm our vow [to support Article 9].

A main theme of the day was that memories of the hardship of war appear to be disappearing as the wartime generation ages:

The average age of surviving spouses of soldiers killed in the war has now increased to 94. Passing on the memory [of war] from generation to generation is becoming more difficult.

At person who was 8 years old at the end of the war is now 80. A young man who was eligible for conscription then is now 92. There are just a few people left who know the experience of living through war. Today's politicians and business people and students know nothing of war. We must preserve the desire to study the experiences and awareness of those who lived the history of war.

The significance of the day wasn't lost on this Japanese Twitter user, however:

To continue to live in peace.