The End of Japan's ‘Peace Constitution’ Draws Ever Closer 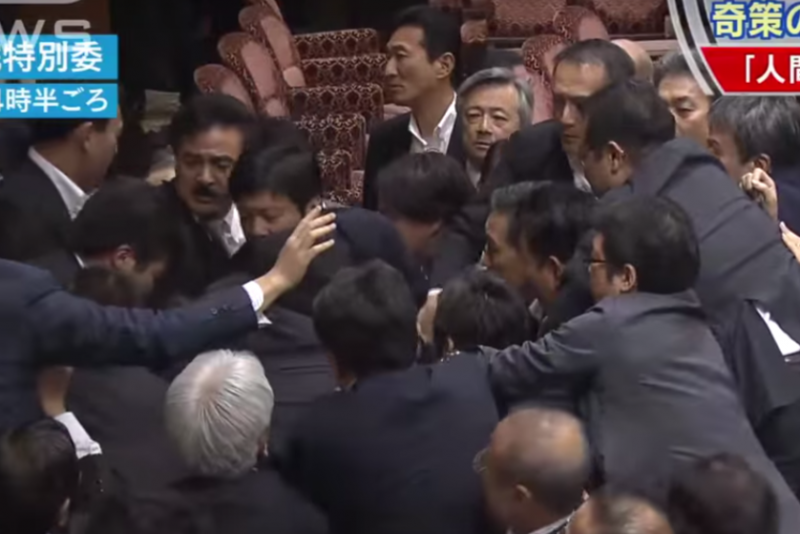 A scuffle breaks out in a committee meeting in Japan's Diet. Screencap from official ANN YouTube channel.

Update: Japan's parliament passed the Legislation for Peace and Security into law early on Saturday, September 19, 2015.

Chaos reigned in Japan's Diet for most of the week of September 14 as the coalition government of Prime Minister Shinzo Abe started the process of finalizing controversial new legislation that will allow Japan to go to war.

Abe has stated he wishes to see the bill passed into law by the House of Councillors, the upper house of Japan's bicameral parliament, by the evening of Friday, September 18 at the latest.

Opposition parties did their best to foil the ruling bloc's plans and have been encouraged by tens of thousands of protesters chanting on the streets just a block away in the heart of Tokyo.

Breaking: Opposition parties put up a fierce fight [against passage of the] Legislation for Peace and Security, while crowds gather to protest outside of Japan's National Diet.

Once passed, the Legislation for Peace and Security will greatly expand the overseas role of the Self-Defense Forces and allow for Japan to exercise its “right to collective self-defense” and participate in military operations with other countries such as the United States.

Depending on who you ask, the proposed law can be considered technically unconstitutional, contravening Article 9 of Japan's post-World War II “Peace Constitution”.

The government began the process of enacting the bill into law on Wednesday, September 16. At first the special committee of the Upper House could not begin as doors were blocked by protesting legislators, as seen in the video below:

Eventually lawmakers were allowed into committee chambers, where the opposition tried every trick in the book to delay the committee vote needed to move the bill on to the next stage of the legislative process. There were even plans to submit a motion of non-confidence of committee chair Konoike Yoshitada.

Eventually, ruling lawmakers came up with a cunning plan whereby they approved the bill in committee. Opposition lawmakers, realizing they had been tricked, quickly rushed towards the speaker, resulting in a minor brawl in the Diet chamber.

From the front page of the Tokyo Shimbun: Government continues to ram through passage of bill. Peace and Security Bill approved in committee. Opposition parties get ready to submit a motion of non-confidence, vow “no compromise.” For more details read the September 18 morning edition of the Tokyo Shimbun.

‘Japan has vowed to end democracy’

Of special interest to many Japanese is that the mustachioed man in the right of the picture is retired Colonel Masahisa Sato. Now a sitting as member of the governing party in the House of Councillors in Japan's Diet, Sato once led the Japanese Iraq Reconstruction and Support Group in January and February 2004, the first foreign deployment of the Japanese military since the Second World War.

Earlier in the week, before the altercation, Sato took to Twitter to complain about the tough working conditions in Japan's Diet:

We spent the whole evening stuck in a meeting room, and were totally blocked from getting into the committee chambers. We were even barricaded from the toilets by opposition MPs.

Not everyone felt sorry for Sato and other government lawmakers who were inconvenienced by the antics of the opposition:

Surely you must understand, Sato Masahisa, that what you guys are doing is unconstitutional.

Meanwhile, a heavy police presence blocked protesters from the Diet in central Tokyo.

Although the demonstrations are non-violent, we're seeing historical display of force here. We're telling the world that “Japan has vowed to end democracy.”