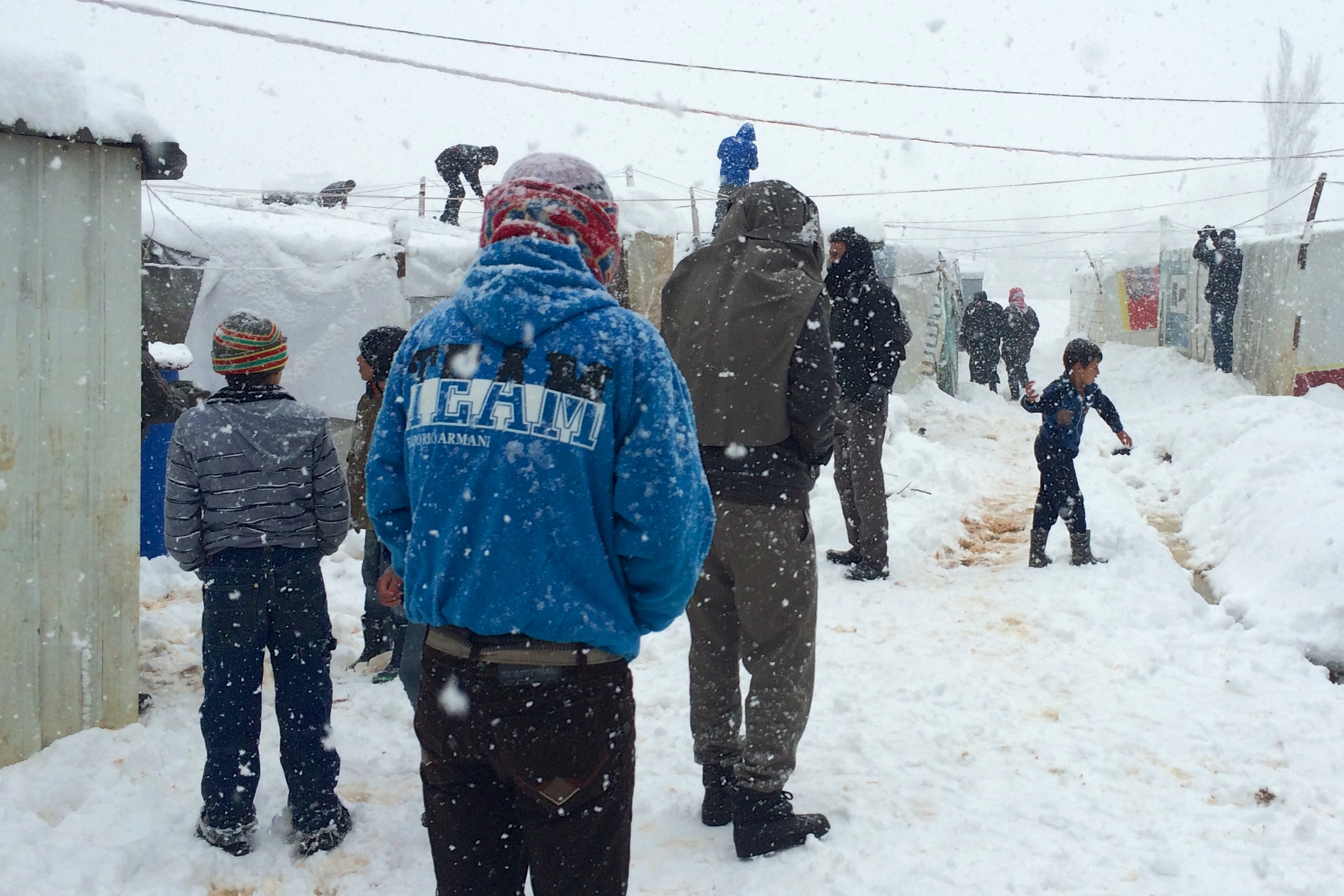 Syrians who fled the war at home for the Lebanese border town of Arsal are once again caught up in the violence between Lebanese forces and Syria-based militant groups.

This latest incident has raised fears of renewed hostility towards refugees. Arsal has a history of Syria-related bloodshed due to its proximity to the country, and it is often the case that refugees end up being scapegoated after armed conflict.

On June 30, 2017, Lebanese soldiers raided two Syrian refugee camps in the border town of Arsal, in the Bekaa Valley in eastern Lebanon, to “search for terrorists, weapons, and explosives.” They were met with five suicide bombers, according to Lebanon's National News Agency (NNA). A young Syrian girl died when a suicide bomber detonated himself.

At least 350 people were detained in the raids; by July 4, 315 had been released, according to the Lebanese newspaper Daily Star. No news has come out as to the whereabouts of those still in custody. Global Voices contributor Ruslan Trad's own relatives were among the detained.

As the news came out of violence in Arsal, pictures of detainees with their faces on the ground surrounded by soldiers were widely shared on social media and were met with criticism.

But others supported the army's actions. Lebanese blogger Claude El-Khal wrote that these online criticism constitute “attacks on the Lebanese army”.

And Da7yeh, a popular news website with an editorial stance that is pro-Hezbollah, the powerful Lebanese political and militant group, shared a photo to its more than 400,000 followers of some of the detainees, mocking them and calling them ISIS. Hezbollah has fought in the Syrian war on the side of President Bashar al-Assad's government and Iran, claiming their intervention was to “protect Lebanon” and “fight against terrorists”. 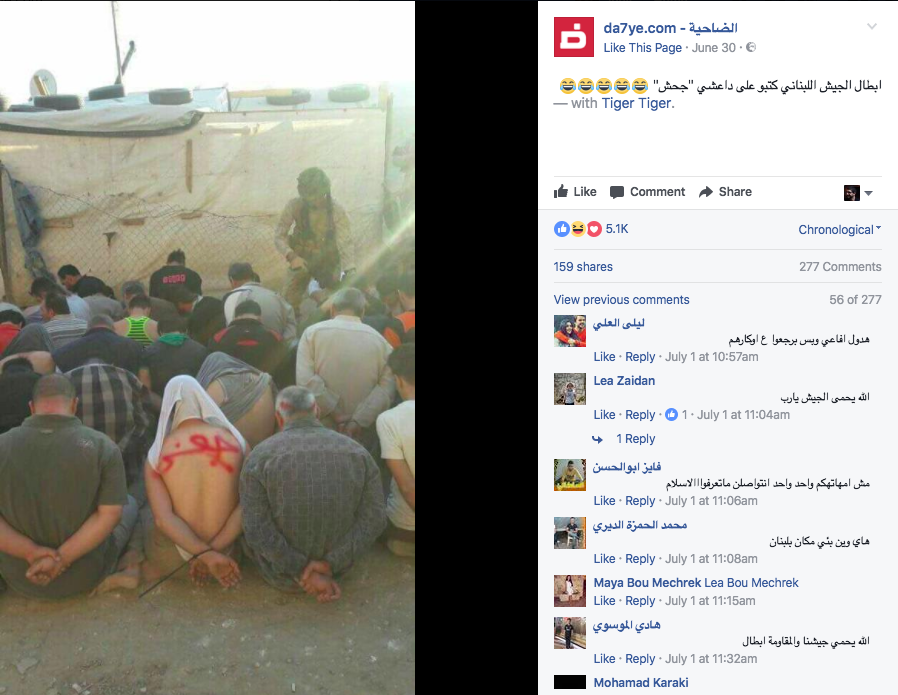 The caption reads: “the heroes of the Lebanese army wrote ‘mule’ on an ISIS person’. Source: ‘Da7yeh’ Facebook Page.

But on Tuesday July 4, the army shared another statement claiming that four of the Syrian detainees died in custody “due to health complications”, raising questions about the way the detainees are being treated.

Many Syrian activists have claimed that the men were killed, or that the Lebanese army was guilty of abusing them before they died. A number of human rights organizations have called for independent investigations, including Human Rights Watch and the Lebanese Center for Human Rights, which specifically condemned the use of torture by the armed forces:

We strongly condemn what has happened since last Friday, the spread of degrading images that document the arrests, the torture of detainees and the systematic campaign of intimidation against any person or organizations who raised their voice to criticize the illegal procedures used by the armed forces.

But those who criticize or even question the army's methodology often received scorn and intimidation. The saying “the army is a red line” (الجيش اللبناني خط أحمر) is a popular one in Lebanon, and denotes the widespread belief that the army is beyond criticism.

For example, the Facebook page entitled “The army is a red line” (in Arabic) asked its more than 40,000 followers to demand the arrest of lawyer Tarek Chindeb, who criticized the army on his Twitter account.

Furthermore, government agencies have targeted human rights groups who raise allegations of torture. In 2011, several organizations called on the government to “cease harassment of human rights activist for documenting torture”.

For his part, the Lebanese human rights minister has called for an investigation into the events following Arsal, citing the need to “preserve the army's image and prevent any rumors that may be malicious”.

And Lebanese blogger Kareem Chehayeb, while pointing out that evidence shows torture is “routinely practiced by Lebanon's police and army”, argued that what transpired at Arsal demonstrated a larger issue surrounding refugees in Lebanon:

Whatever happened, we have to recognize that the response towards these attacks where refugees/Syrians are all assumed guilty is inhumane

Arsal and the Syrian Civil War 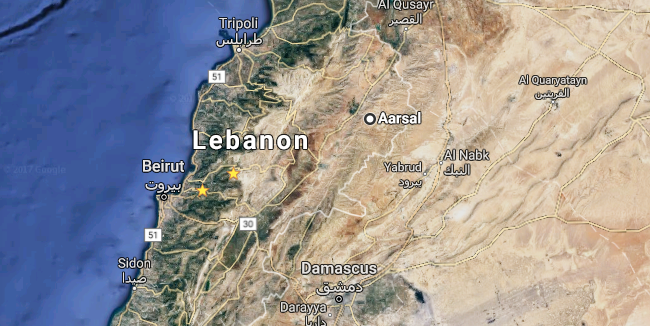 Arsal has long been affected by the Syrian revolution and subsequent civil war due to its proximity to the Syrian border.

Between November and December 2013, the infamous Battle of Qalamoun in Syria between pro- and anti-regime forces pushed 100,000 refugees into neighboring areas in Lebanon, notably Arsal. The battle resulted in a decisive victory for the Assad regime and its ally Hezbollah.

In a matter of months, Arsal's population was tripled.

Just a few months later, on August 2, 2014, the Lebanese army arrested a commander from Nusra, Al Qaeda's affiliate in Syria, and was subsequently attacked by both Nusra and ISIS. The extremist groups took over the town the same day, trapping refugees and residents between two warring parties for a few days.

The Battle of Arsal followed, and would last until August 7, 2014. It would take the lives of 30 militants, 17 soldiers and up to 42 civilians, with 19 more soldiers missing. The groups eventually withdrew from the town, and the Lebanese army focused its efforts on retrieving its own.

It was soon revealed that Nusra had also executed two soldiers.

On December 1, 2015, 16 Lebanese prisoners were exchanged with 13 Nusra members during a swap in Arsal. The deal, which took a whole year, was brokered by Qatar. 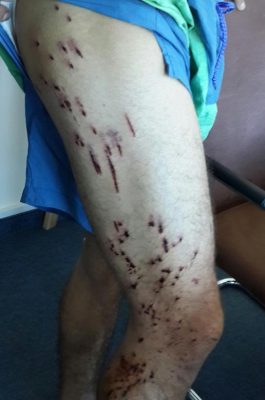 Wounds that Syrian refugee “Ali” sustained after being attacked in his home in Jnah and shot with a pump-action shotgun on September 19, 2014, by men he believed belonged to a Lebanese political party. Source: Human Rights Watch. CC BY-NC-ND 3.0 US

The latest out of Arsal has some worried Syrians could become targets of reprisals.

After the 2014 Battle of Arsal, Human Rights Watch documented 11 violent attacks against Syrian refugees or people perceived to be Syrians. One refugee at the time told the organization:

When I first arrived, Lebanese people were very hospitable to me, they treated me like a refugee, someone who needed protection and had fled from the war. Now they treat me as if I am a terrorist or a security threat.

Lebanese Defense Minister Yacoub Sarraf claimed the recent incident showed the importance of tackling the refugee crisis in Lebanon. According to the UNHCR, approximately 1.01 million Syrian refugees are in Lebanon.

Several members of parliament support the idea of sending back Syrian refugees to “safe areas” in Syria, which would mean working with the Assad government, a highly controversial proposition to take in Lebanon.

The Lebanese public are largely weary of Assad's rule due to Syria's past occupation of their country, which ended in 2005. This was the so-called Cedar Revolution, triggered by the assassination of former Lebanese Prime Minister and anti-Assad politician Rafik Hariri.

Furthermore, refugees themselves are resistant to the idea out of fear of going back to regime-held areas. The Daily Star cited an anonymous source who said many refugees from Arsal have requested being moved to rebel-held Jarablus in Syria.

And some political movements in the country argue that Syria has no legitimate government, and that therefore it would be impossible to coordinate with any one power on returning refugees. The Lebanese minister of refugee affairs insists on a UN-coordinated return of Syrian refugees, refusing to deal with Assad.

Meanwhile, the UN said that it was ‘too early’ for large numbers of refugees to return to Syria.