The sackings amounted to 2 percent of the workers surveyed. 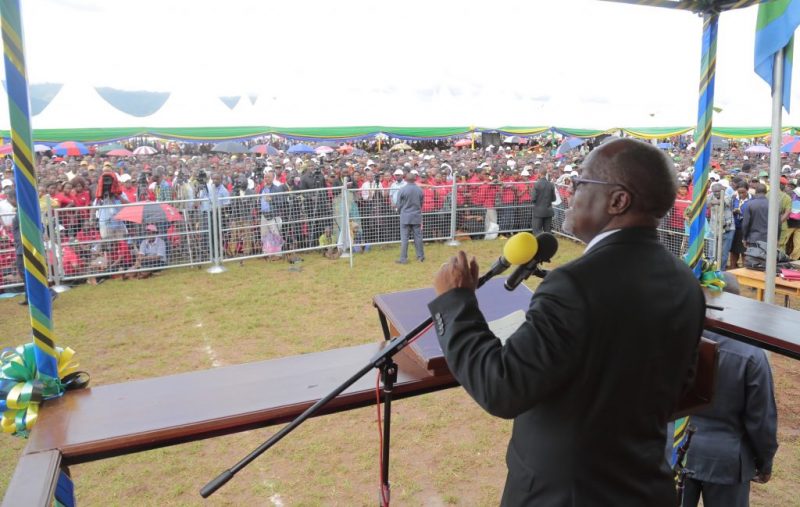 Tanzania's President John Magufuli addressing a crowd during the 2017 May celebrations. Press photo from State House.

On the eve of May Day, a day where the world pauses to honour its workers, the government of Tanzania shamed thousands of civil servants in the country.

On April 28, President John Magufuli ordered the immediate firing of almost 10,000 civil servants after an investigation found that some government workers had been occupying their positions with forged qualifications.

“They are thieves like any other thieves,” Magufuli was quoted as saying. “They could be jailed for seven years as the law says.”

This purge comes a year after the government found that it was losing billions of shillings annually to tens of thousands of “ghost workers.”

The report, which looked at verifying the authenticity of 450,000 government employees’ qualifications, found that district municipalities led in the number of civil servants with forged certificates at 8,716. They were followed by other government-run institutions like the Sokoine University of Agriculture which had 33 people with fake qualifications and the Tanzania Railway Cooperation with 24.

It didn't take long for the internet to share its two shillings on the news.

Some people expressed some sympathy for the sacked civil servants, asking God to give those with fake certificates strength.

Just take note of the names circulating on WhatsApp but something like this is heart-breaking and can affect someone psychologically. May God give strength to those with fake certificates.

Others were cracking jokes about the whole thing.

Starting next Tuesday, if you see a public official not going to work, playing with the kids at home, don't ask too many questions!

Generally, the news received a lot of “poa sana” (very cool) “safi sana” (very nice) as people are pleased that some action is being taken over the issue. Even former President Benjamin Mkapa came out publicly supporting Magufuli's move, saying the decision was “overdue.”

‘…they love to give jobs to their family members…’

Of course, there were people who took the matter less lightly.

Hery Ayubu went on Twitter arguing for an independent commission to adjudicate the matter.

There should be an independent commission that will listen to the complaints of workers with fake certificates. The government cannot judge its own case.

Meanwhile, one opposition party, Alliance for Change and Transparency (ACT), tweeted that although they supported the government's drive against fake certificates in the civil service, they questioned whether the exercise went far enough.

The second issue that's not right are the statements by Minister Angellah Kairuki that the process of verifying certificates does not implicate politicians and government appointees.

The party went on to suggest that the decision amounted to the government protecting some of its appointees.

Not implicating political figures in the verification exercise is evidence of how the government is struggling to shield some of the president's appointees.

Felix Milinga agreed with the report that districts municipalities were the worst offenders, arguing that nepotism defines the way folks get civil service jobs.

‘Will the education system that provides low quality also be charged?’

Perhaps the most popular comment on the matter came from prominent law professor Issa Shivji who inquired about what action the government is taking against those with legitimate certificates but fake education.

From the street corner: Those with fake certificates have been fired/charged. How about those with valid certificates but a fake education? Will the education system that provides low quality also be charged?

Dr Hellen Kijo-Bisimba, the executive director of the Legal and Human Rights Centre, suggested that in the future the government should ensure that folks with fake certificates don’t get hired at all.

“The war on fake certificates should be forward looking. A system should be put in place to ensure no one would be employed if they use forged certificates,” Kijo-Bisimba told The Citizen, a local English daily.

Internationally, some people praised Magufuli's action and compared the problem of fake certificates to other countries. Some commenters posting on BBC Africa's Facebook page applauded the Tanzanian president's move. “The president has done a very recommendable job,” Chimwemwe Tembo, whose profile says they are from Malawi, wrote:

Its indeed bad development. I head that even some degrees are fake. The president has done a very recommendable job. Let those who fought for papers secure jobs. In Malawi if that happens, then its on rare cases but many of us, we use genuine papers

Gezahegn Arebo, from Ethiopia, was also effusive in their praise:

Well done, Mr. President! This is mostly an African problem,but the leaders arent willing to solve it; they are fake themselves!

The quantity of alleged forged certificates and reaction from the public deem this a prevalent issue in Tanzania. It seems as though faulty education and recruitment systems combined with overlooked nepotism have kept this issue in the closet for many years.