Amidst Political Scandal and a Hate Crime Probe, Japan’s Old Rescript on Education Is Back 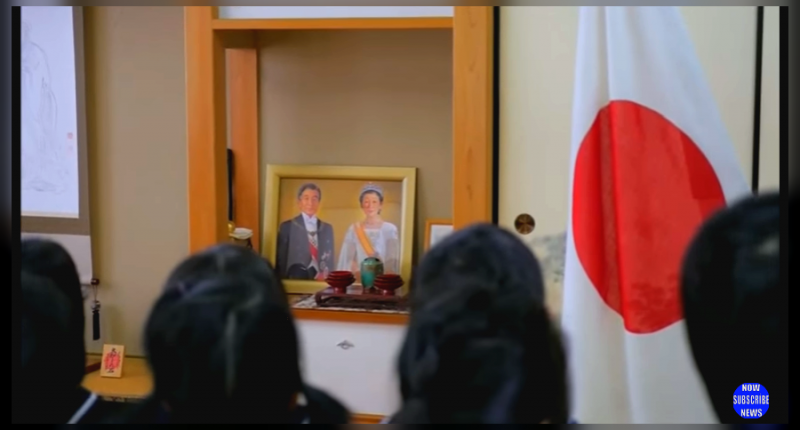 Students at Tsukamoto kindergarten, run by Moritomo Gakuen, paying respects to the Japanese Emperor and Empress. Screencap from a video widely shared on social media.

A decision by the Japanese government to allow the pre-World War II guiding principles of education in Imperial Japan to once again be taught in schools has surprised observers. The government's announcement also comes at a time when Prime Minister Abe Shinzo and his popular spouse Abe Akie have, since January, been at the center of a scandal for their connections to a shady land deal that benefited an ultra-conservative and ultra-nationalist organization that teaches emperor worship.

On March 31 the Japanese cabinet issued a statement that the Japan's Imperial Rescript on Education, first proclaimed in 1890, may once again be used as teaching material in Japanese schools. Abolished by occupation authorities in 1948 following Japan's defeat in World War II, the Imperial Rescript on Education essentially places filial piety and loyalty as the moral foundation of Japanese society. Just as the Japanese emperor venerates his ancestors, the people of the nation, or “Japanese polity” (国体, kokutai), should venerate the emperor.

The cabinet statement on March 31 in support of the Imperial Rescript on Education was curious in the context of a slow-moving, complicated and persistent political scandal involving Abe Akie, prime minister Abe Shinzo's wife, and Moritomo Gakuen, a private school in Osaka that is affiliated with political group Nippon Kaigi. Roughly the Japanese equivalent of Opus Dei, the Moral Majority and the John Birch Society all rolled up into one, Nippon Kaigi counts Prime Minister Abe as a special advisor to its parliamentary caucus, and is thought to hold strong influence over the Japanese government..

Moritomo Gakuen has sparked controversy after controversy over the past four months. In January, a hate crime investigation was launched against Moritomo Gakuen after administrators at a kindergarten run by the school handed parents leaflets that described Korean residents of Osaka and Chinese people as “those with wicked ideas.” This wasn't the first time administrators and employees at the school made racist remarks, for which the principal was forced to apologize in February.

With intense media attention focused on the school since January, it was revealed that Moritomo Gakuen received government land for a new school at far below its market value. The scandal deepened when it was discovered that Abe Akie was officially affiliated with the school as a sponsor, with her photograph appearing on its website. In subsequent parliamentary hearings about the land deal, school principal Kagoike Yasunori claimed Abe Akie had donated a large amount of money to Moritomo Gakuen, as a gesture of support. Although Kagoike had testified under oath, Abe Akie and the prime minister denied his claims.

What adds an extra layer of oddness to the story is the curriculum of the school itself, which billed itself as Japan's “first and only Shinto school.” Shinto is a state-sponsored religion that, to a certain extent, incorporates old Japanese folks beliefs. There is the belief it can provide Japanese youth with a moral compass that has been lacking since occupation authorities divested the Japanese emperor of his power following World War II.

While the school claims it is using Shinto to teach right from wrong, in January 2017, Moritomo Gakuen raised eyebrows with videos of its blatantly nationalistic agenda. Posting on Facebook, Eric Johnston, an Osaka-based journalist, noted that videos surfaced that clearly show young students chanting slogans such as “Don’t lose to other countries; protect the Senkakus and Takeshima” (two groups of islands whose possession Japan disputes with China and Korea, respectively), and “Don’t teach lies in textbooks that Japan was evil towards China and Korea.”

On top of that, each morning students at the school recited the Imperial Rescript on Education, which had been banned from use in schools since 1948 — that is, until recently.

‘What is exactly is wrong with the rescript?’

Prime Minister Abe and his spouse Akie are not the only politicians to have been embarrassed by the Moritomo Gakuen scandal. Defense minister Inada Tomomi faced calls to resign and was forced to apologize in front a parliamentary committee in March after she appeared to be lying about providing legal counsel to the school more than a decade ago.

Prior to being forced to backtrack in March, Inada in parliamentary committee meetings supported Moritomo Gakuen's daily recital of the Imperial Rescript on Education. Inada is also on the record in the past as asking “what (is) exactly wrong with the rescript”.

Rather than backing down in the face of the scandal surrounding Moritomo Gakuen, Prime Minister Abe's cabinet stated on March 31 that it was acceptable for the pre-war Imperial Rescript on Education to once again be taught in school if it is used “in line with the Constitution and the education law,” while schools should still primarily follow the government-approved curriculum.

According to the Japanese Communist Party in an FAQ on the party's website from 2000, there is plenty wrong with the Imperial Rescript on Education:

The Imperial Rescript on Education makes no mention of the value of human life, nor of human rights or equality.

While the Imperial Rescript on Education says ” as husbands and wives be harmonious, as friends be true”, the National Diet, sustained by the very sovereignty of the people, should not, as the state, be instructing families and friends on how to be through the rescript on education.

Despite the controversy and the protests, the Abe government will not disavow use of a Meiji-era education document that contains language legitimizing militarism, so long as the presentation does not conflict with Japan's Constitution.

Advocates for restoring the rescript ‘are simply ignorant of history’

Even the typically right-leaning Keizai Shimbun newspaper has reservations about reintroducing the Imperial Rescript on Education in schools. In response to the education minister's comment of “who am I to prevent parts of the Imperial Rescript from being taught in schools for the purposes of moral education?” (「道徳を教えるために教育勅語のこの部分を使ってはいけないと私が申し上げるべきではない」), the Keizai Shimbun argued:

Not just parts but the whole of the Imperial Rescript on Education should be discarded. [The rescript] should not be revived as a teaching guide for moral education.

Other media commentators in Japan thought the 1890 rescript was irrelevant to the needs of contemporary education. Tsujita Masanori maintained that it's “nonsense” to contemplate reintroducing the rescript to schools to be memorized and recited every morning in school. Writing for magazine Shukan Gendai in an article with the title ”People Who Advocate Restoring the Imperial Rescript on Education Are Simply Ignorant of History” (教育勅語」復活論者は、単に歴史の無知をさらしているだけ), he said:

If you study the history of the rescript, you'll understand that it cannot serve as the “golden rule” connecting education policy with morality. Instead, the [1890 rescript] should be interpreted with some flexibility, in response to modern conditions.

The historical context of the 1890 rescript, Tsujita said, was that it was written in response to Japan's period of rapid modernization in the 19th century. The rescript was later amended and reinterpreted by authorities as Japan embraced imperialism in the first half of the 20th century. The Imperial Rescript on Education was abolished in 1948, Tsujita says, when Japan embarked on a new era.

A school shuts down and Abe's poll numbers are up

For the time being, despite the controversy and the protests, the Imperial Rescript on Education will be allowed to be taught in Japanese schools as long as, according to the Japanese cabinet, that it is used “in line with the Constitution” and laws covering education in Japan.

While Moritomo Gakuen has shelved plans to open the school implicated in the land-swap scandal and the principal of the school has resigned as operators of the school continue to be dogged with bribery allegations, Prime Minister Abe has remained relatively unscathed by the scandal.

As attention in Japan has shifted in April towards the showdown and the threat of nuclear war between the United States and North Korea on the Korean Peninsula, Abe's poll numbers are up, and the opposition Democratic party languishes at 10 per cent support in the polls, with the next general election scheduled for December 2018.