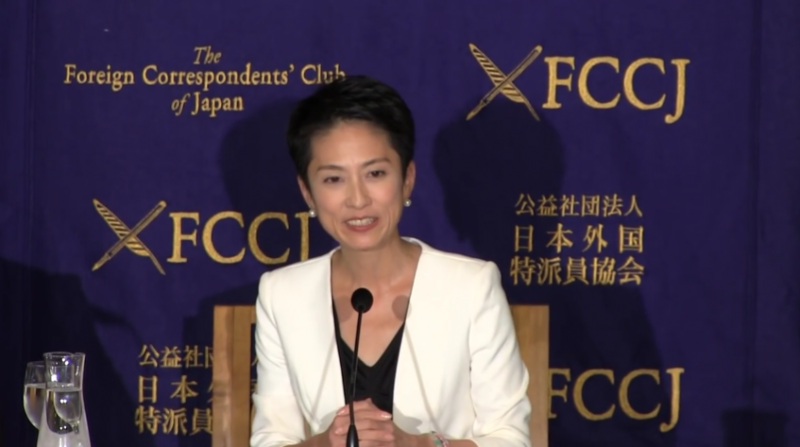 A female Japanese politician is under fire for her Taiwanese roots, and is accused of hating Japan itself. It is all part of a campaign to tie the charismatic former television presenter to the darkest moment in recent Japanese history.

Renho Murata, a popular oppositionist generally known simply as “Renho,” is in the running to head the newly created Democratic Party (民進党, Minshinto, or ‘DP’) Japan's largest opposition party, which will select its leader on September 15 .

Although her father was originally from Taiwan, Renho was born and raised in Tokyo and held dual citizenship between Japan and Taiwan until at least the age of 17.

Renho went on to be a newscaster in the 1990s, sometimes reporting on China.  Elected as a member of Japan's Diet in 2004, she would make the transition to a minister in the ill-fated Democratic Party of Japan (民衆党, Minshuto, known as ‘DPJ’ and now defunct) government that formed in 2010.

As the newly formed Democratic Party (DP) prepares to elect a new leader on September 15, political opponents are trying to link Renho to the much unloved Democratic Party of Japan and accusing her of secretly continuing to hold dual citizenship, something prohibited by Japanese law.

This cover of the August, 2010 issue of an in-flight magazine from a Chinese domestic airline. There's an article that asks “Will Renho become the future prime minister of Japan?” The article also says she never gave up her Taiwanese citizenship.

It doesn't help that Renho herself announced she was submitting documentation to the equivalent of the Taiwanese embassy in Tokyo to ensure once and for all she no longer holds dual citizenship.

For Renho's critics, the question about her nationality has provided them with a brilliant opportunity to question her commitment to Japan. Thanks to a recent provocative opinion piece by ultranationalist Abiru Rui published by the conservative-leaning daily Sankei Shimbun, the terms “repudiate” and “hold in contempt” (否定・軽視) trended on Twitter earlier in this week.

“Frank Talk from Abiru Rui” — By Rejecting and Holding the Concept of ‘Country’ In Contempt, the ‘DNA’ of the old Democratic Party Still Flows Strong.” — Sankei News (@Sankei_news)

Images of failure, incompetence, and even treason and racism

Abiru's contentious opinion piece has the cumbersome title “By Rejecting and Holding the Concept of ‘Country’ In Contempt, the ‘DNA’ of the old Democratic Party Still Flows Strong,” (‘国’ を否定・軽視する民進党には、やっぱり民主党ＤＮＡが色濃く流れている).

In power during the March 2011 “Triple Disaster” before being turfed out in a 2012 general election, the Democratic Party in Japan (DPJ) conjures up images of failure, incompetence, and even treason and the very destruction of Japan itself, due the Fukushima disaster or war with China.

The Democratic Party of Japan never recovered the public's trust following the 2012 election, and was dissolved in March, 2016. The new party, simply called the Democratic Party (DP), was created by merging some factions of the old DPJ with an assortment of fringe parties after that.

There's hope that the telegenic Renho will somehow inject life into the DP, which faired poorly in a recent election at the beginning of the summer.

In his contentious article for Sankei, Abiru characterizes Democratic Party leadership hopeful Renho Murata as “basically saying” she “has no concept of what a country is” (国というものが何だかよく分からない) and that “Japan is not just for Japanese people” (日本列島は日本人だけの所有物じゃない).

During his short tenure as Japanese prime minister in 2009-10, Hatoyama became infamous for his many gaffes. After leaving office he enraged many in Japan by traveling to China to apologize for Japan's wartime behavior, proof, Abiru says, of Hatoyama's allegiances to a foreign government. Successive DPJ prime ministers were widely perceived to have bungled the response to the earthquake, tsunami and nuclear disaster (known as the ‘Triple Disaster’) that overwhelmed Japan, before triggering a confrontation with China over the Senkaku Islands that continues to this day.

Abiru's Sankei article went viral, with many commenting on Abiru's twisted logic. A common complaint was that Abiru had fabricated Renho's quote:

Renho never said she “repudiated Japan”, so why is that part of the title? And if we're talking about a country with a history of selling out the country, that would be the [ruling] Liberal Democratic Party, wouldn't it?

More than a few commenters complained about Abiru's lazy prose:

(Abiru's column) has little more substance than a drunken rant, but I guess this is what the old farts are talking about these days. Maybe it goes over well out in the boonies with the [ultra-conservative] Nippon Kaigi crowd.

While there were plenty of Twitter commentators who made disparaging remarks about Renho's ethnicity, and her willingess to “sell out Japan”, she still has her supporters.

Born in Japan, speaks Japanese as her mother tongue, just happens to have a father who was born in Taiwan. This should have been *clarified* in Abiru's article. Don't give up, Renho!

A new leader of the Democratic Party will be chosen on September 15, 2016.